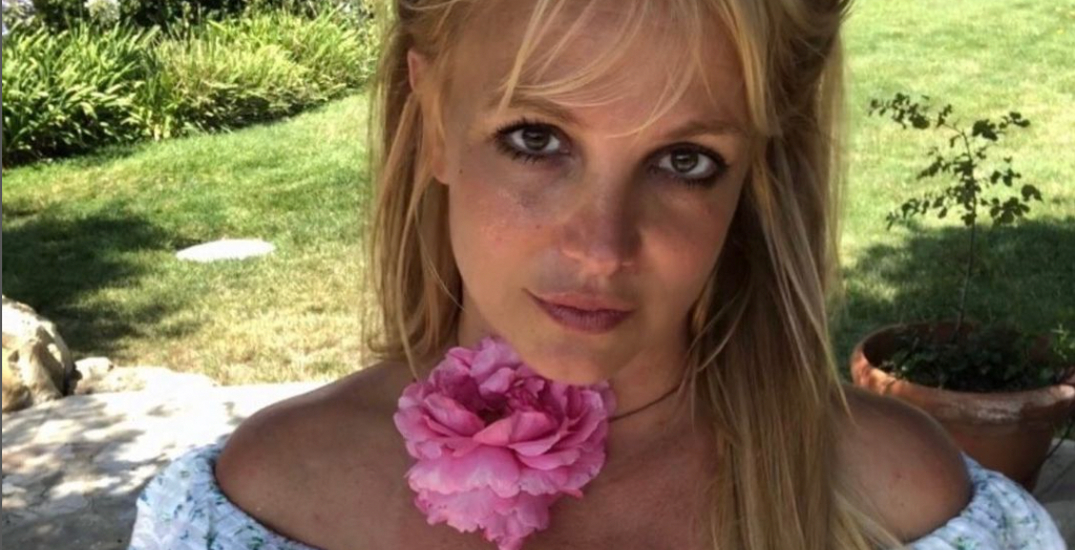 On Friday, Britney Spears told her Instagram followers that she had experienced a miscarriage, just over a month after she announced she was expecting a baby with her partner Sam Asghari.

“It is with our deepest sadness we have to announce that we have lost our miracle baby early in the pregnancy,” read the couple’s message.

But they probably had no idea about the social media shitstorm that awaited them.

Britney announced her pregnancy on April 11. It came after 13 years of her forcibly being put on birth control by her conservators.

For the last few weeks, Britney’s followers have been concerned about her well-being. The star has been posting several “photo dumps” of herself in the nude, casually posing in her living room. Many came to her defense and said Britney was finally getting to have her sexual liberation.

Now, the confrontation has taken a darker turn.

As the couple grieves the loss, people are claiming Britney was never pregnant to begin with.

Something tells me that Britney Spears was never pregnant in the first place, therefore there was no miscarriage.

They’ve even taken to the singer’s mournful post to air out their thoughts and suspicions. “Knew this was coming,” one wrote. “Right on cue,” said another.

Asghari has also been attacked for posting gym photos after the announcement. 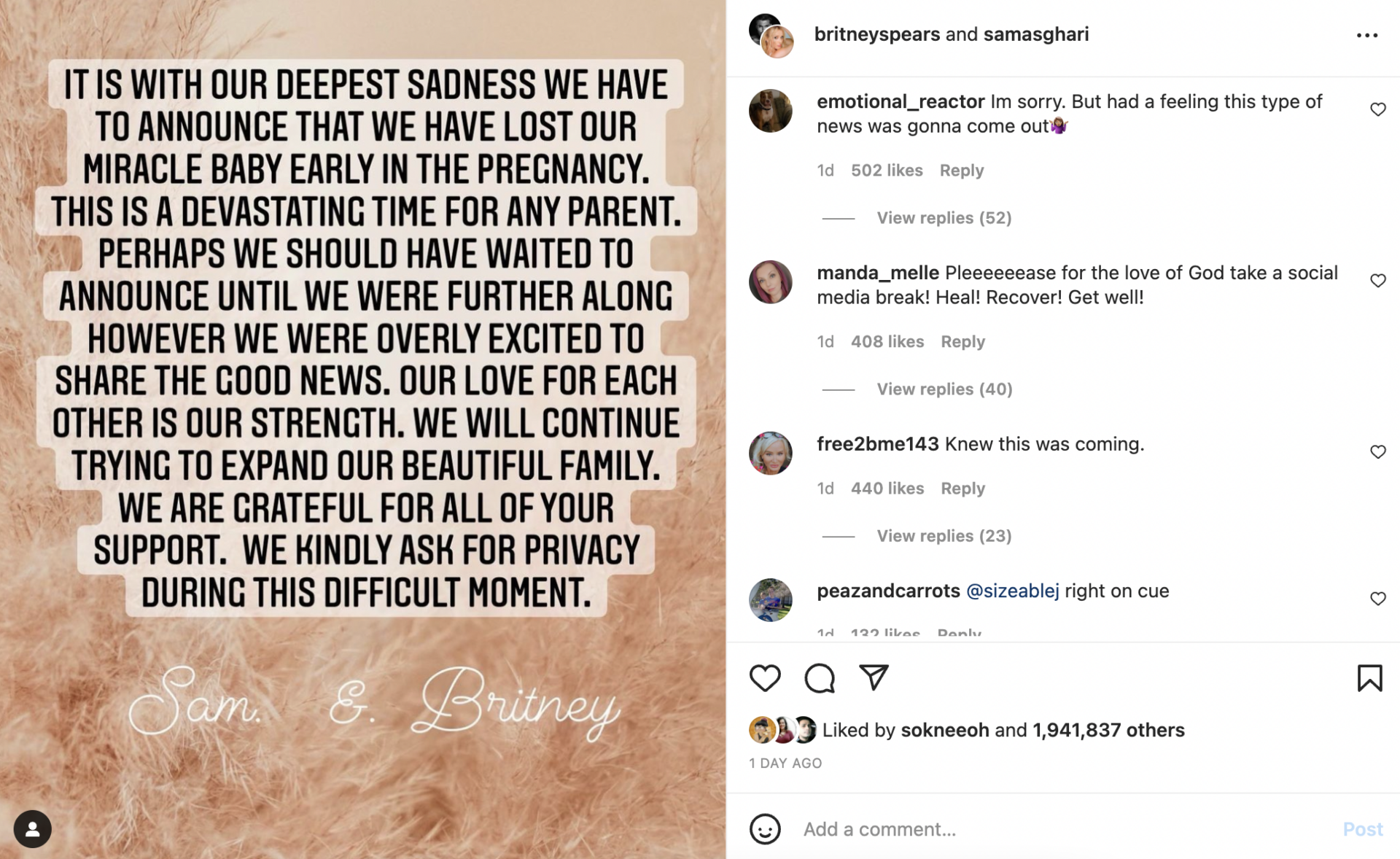 There are four groups of people in the comments of the miscarriage announcement — one that wants to support the star during this time; one that believes this was a pre-meditated publicity stunt from beginning to end; one that maintains Britney was never pregnant, but shared the news in a delusional, mentally compromised state; and lastly, one that thinks Britney should not have announced the pregnancy at such an early stage.

The latter has also been attacking Britney for jet-skiing while pregnant, blaming the loss of the baby on her activities.

I can’t fucking deal with these people who are saying all this awful shit about Britney experiencing a miscarriage. Saying she was never pregnant, saying it’s due to the JetSki. Just shut the fuck up. I’m not even begging. I’m fucking telling you to shut. The fuck. Up.

Seeing people yet again trashing Britney and trying to run with a narrative that she was never pregnant is sick. Like wtf is wrong with ya’ll? She just lost a pregnancy and people want to say it never existed…the internet is fucking vile.

“Perhaps we should have waited to announce until we were further along, however, we were overly excited to share the good news,” the couple said.

Some people are highlighting how the lack of empathy in Britney’s comments contributes to the social stigma around pregnancy, making expecting parents stay hush-hush about it and not sharing their struggles with the world. 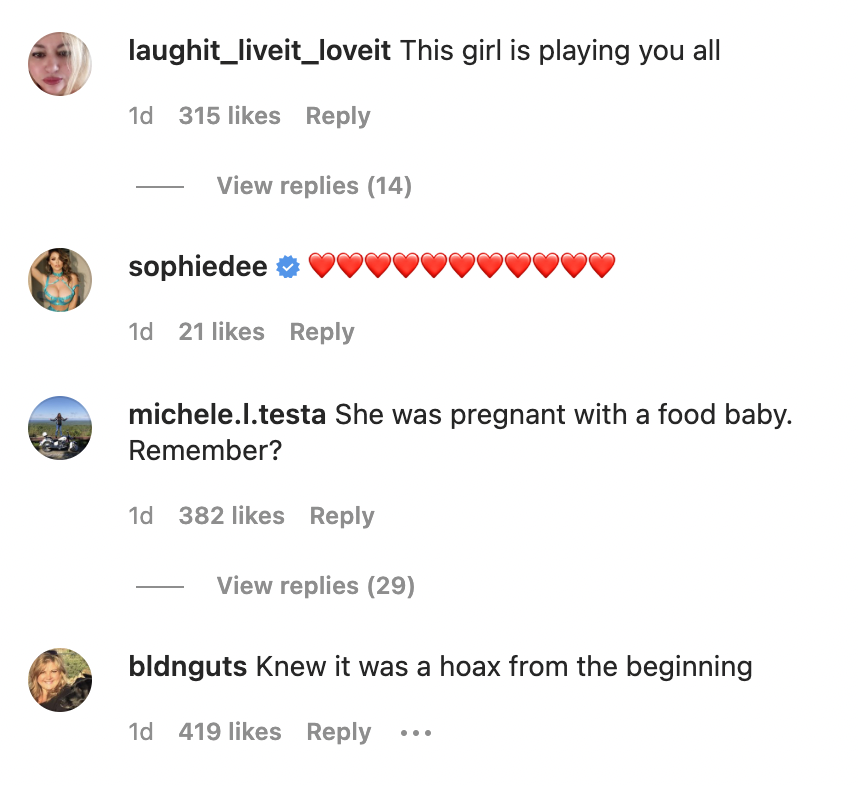 The blame game could also invoke feelings of guilt and distress in those who have lost a baby to miscarriage.

“Britney Spears will never read your tacky a*s comments about how she ‘should have waited’ to announce,” wrote Twitter user @heymrsbond. “But the people in your life who have lost their babies will.”

People who miscarry go through hell. Nobody should feel shame about the loss of a pregnancy.

Britney Spears will never read your tacky ass comments about how she ‘should have waited’ to announce, but the people in your life who have lost their babies will.