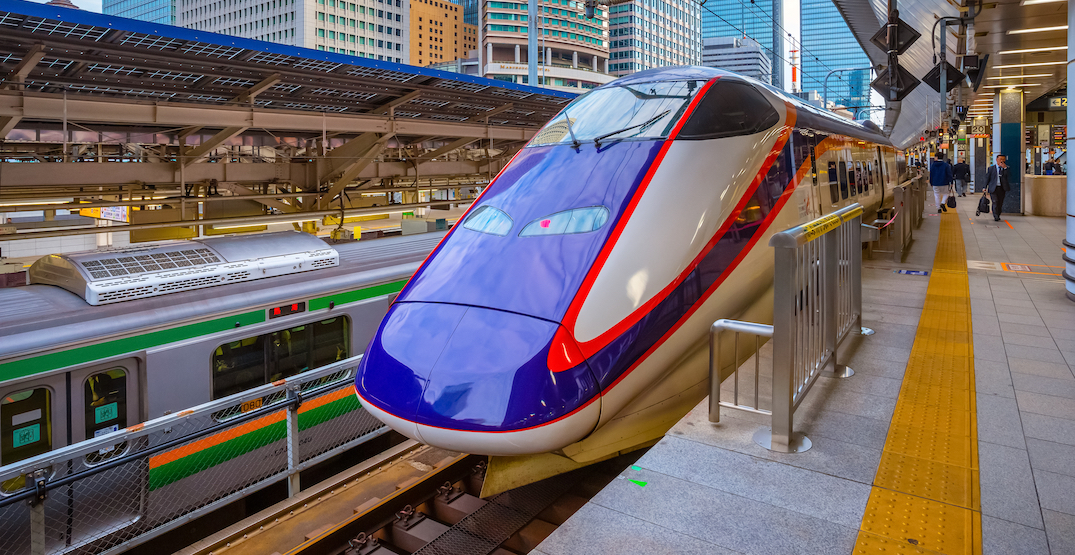 A major partnership has been established between the British Columbia provincial government and a Japanese government-owned private company for the sole purpose of opening up this possibility.

The provincial government recently signed a memorandum of understanding with the Japan Overseas Infrastructure Investment Corporation for Transport and Urban Development (JOIN), which is intended to increase information sharing, discussions, and coordination with Japan on BC’s transportation infrastructure projects.

The agreement between BC and JOIN specifically targets collaboration on the province’s railways, ferries, port terminals, airports, urban development, and other infrastructure projects.

“This agreement will help broaden our horizons on transportation infrastructure and welcome international investment to BC,” said Ravi Kahlon, the BC minister of jobs, economic recovery, and innovation, in a statement.

JOIN is 96% owned by the Japanese government and Japanese companies own the remaining 4%. 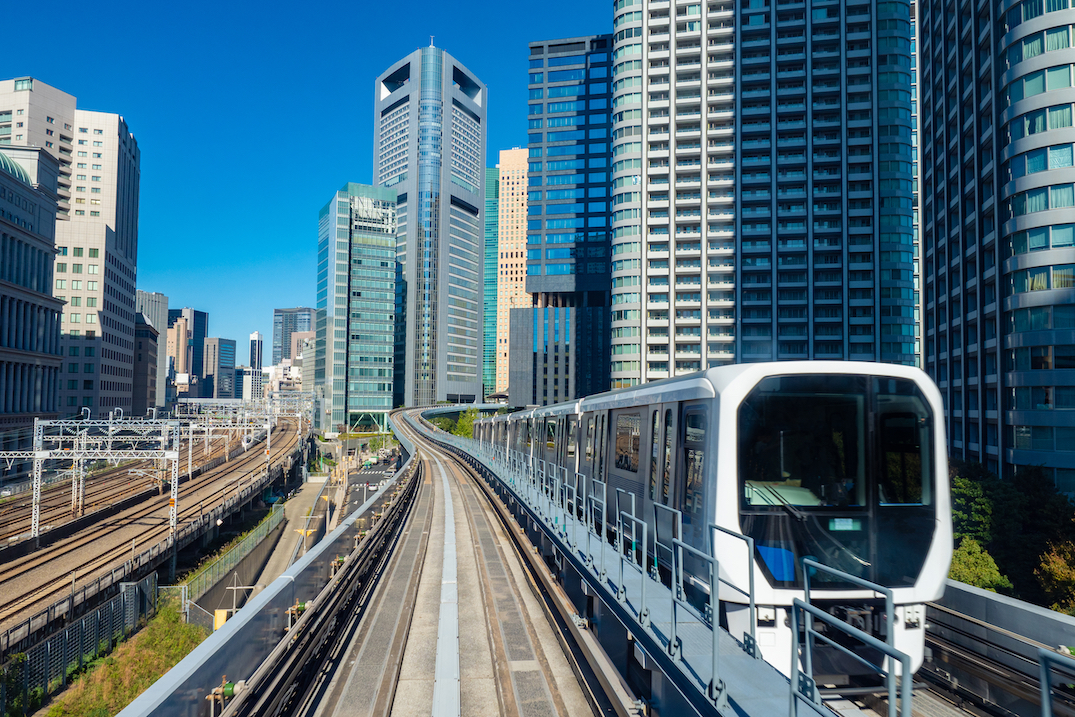 As the company’s name suggests, they specialize in creating public-private infrastructure partnerships outside of Japan as an investment opportunity for the Japanese government, while also opening up business opportunities for Japanese companies.

Of course, Japan is known to be an expert in designing, building, operating, and maintaining high-quality and reliable infrastructure. Moreover, for instance, Japan has been successful in having private companies operate subways and railways, which maintain exceptional service and generate operating profits.

Currently, JOIN has dozens of projects worldwide, with the majority located in Asia. Within North America, this includes their involvement in the high-speed rail project in Texas, and a railway rolling stock maintenance project in Montreal.

“We are honoured to sign the memorandum of cooperation with the BC government. It is the first step but a giant step for future cooperation,” said Takesada.

“Our aim is to be involved in projects together with BC from the upstream by bringing investment opportunities and encouraging Japanese companies on their participation. We are excited to be working with the BC government on these kinds of initiatives going forward.”

This partnership is strategic, given the growing number of multi-billion dollar road and public transit infrastructure projects on BC’s horizon, especially within Metro Vancouver. 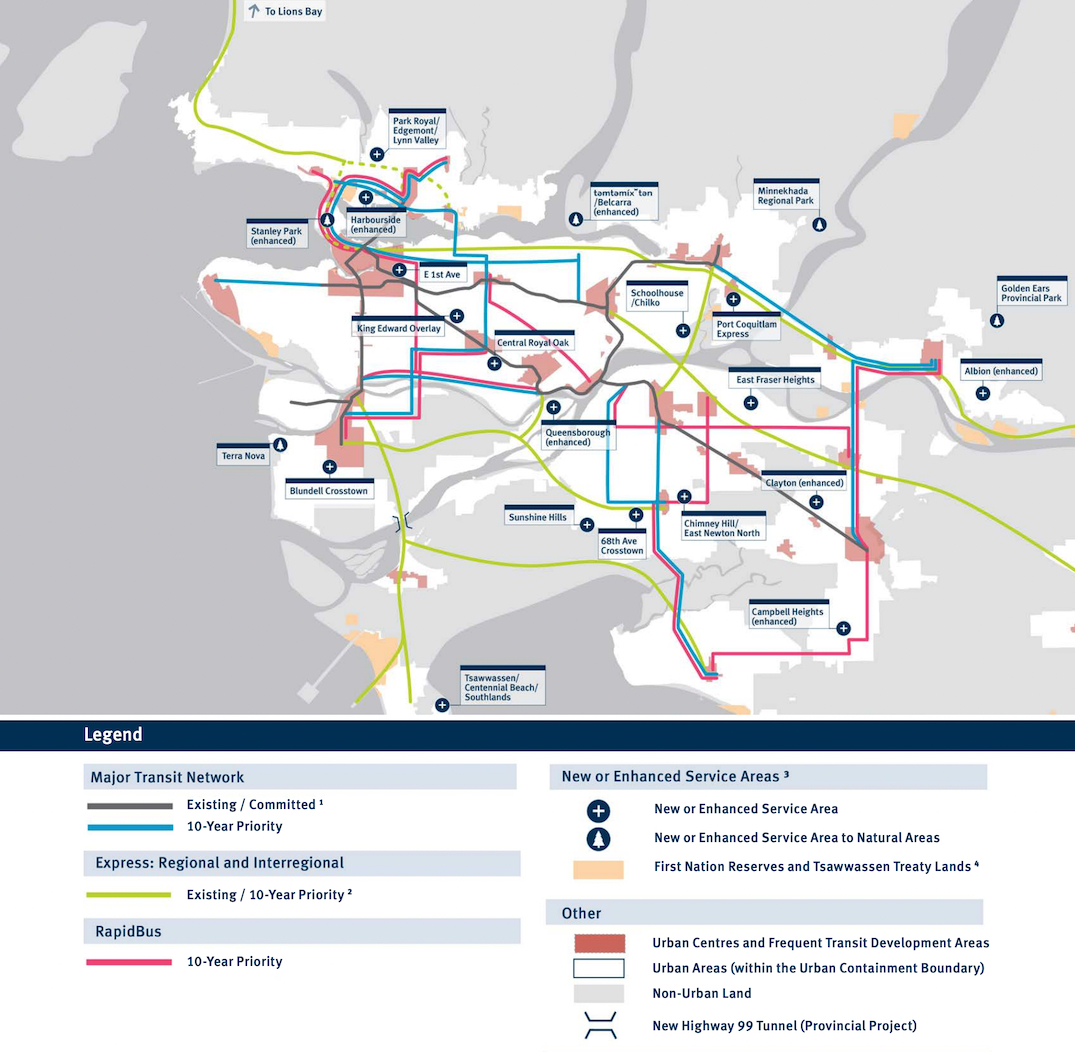 Map of the projects under the 10-year priorities of Transport 2050. Click on the image for an expanded version. (TransLink)

TransLink and the Mayors’ Council approved in early 2022 the Transport 2050 strategy of establishing a 30-year transportation expansion plan for Metro Vancouver.

Just last month, TransLink and the Mayors’ Council approved the 10-year priorities projects of Transport 2050 through the early 2030s, which include as many as nine bus rapid transit lines, the new Burnaby Mountain Gondola between SkyTrain Production Way-University Station and Simon Fraser University, the extension of SkyTrain Millennium Line from Arbutus to the University of British Columbia, identifying a long-term rapid transit technology between Park Royal in West Vancouver and Metrotown in Burnaby via the Second Narrows, and exploring potential SkyTrain extensions to Newton in Surrey and to Port Coquitlam.

All of these projects combined this decade carry an estimated total cost of $21 billion, but it is uncertain how they will be funded without putting upward pressure on taxes and fees.

This also does not include projects spearheaded by the provincial government, such as highway upgrades and new bridges/tunnels.

The main barrier to implementing transportation projects in BC in a timely manner is funding.

The involvement of JOIN opens up the possibility of public-private partnerships to execute new rapid transit projects.

For example, SkyTrain Canada Line is a public-private partnership, with a private consortium led by Quebec engineering giant SNC-Lavalin and CDPQ (Quebec Pension Fund) contributing $750 million towards the $2.05 billion cost of the project in the 2000s. SNC-Lavalin subsidiary ProTrans BC has a 35-year operating contract on the Canada Line through 2044. 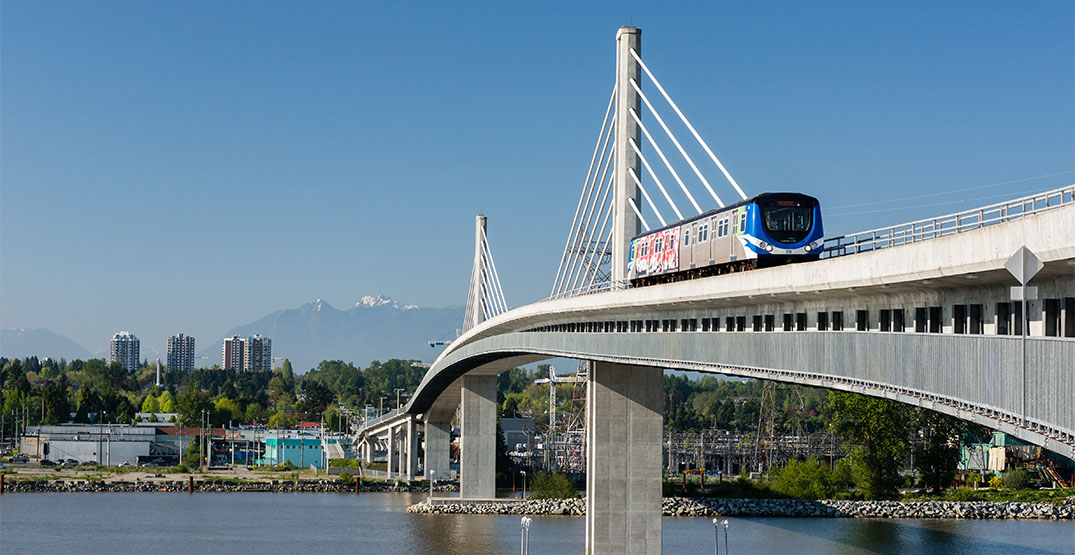 Following CDPQ’s success with the returns it has seen from its investment on the Canada Line, it partnered with the Quebec government on building the REM — a SkyTrain-like, fully-automated metro system with 26 stations spanning 67 km across Montreal, almost the entire length of TransLink’s existing SkyTrain network built over nearly four decades.

The speed of the massive project’s implementation would not be possible without a public-private partnership approach; the partnership between the Quebec government and CDPQ was established in 2015, construction officially began in 2018, and the entire 67 km REM will open in various phases between late 2022 and 2024.

REM is projected to carry a total cost of approximately $7 billion, with CDPQ being the largest funding source of $3.3 billion. This is followed by investments of about $1.3 billion from each of the Quebec and federal governments. CDPQ has also assumed the risk of REM’s construction, operation, and ridership, and the pension fund’s role in filling much of the construction costs expedited the project’s timeline overall, as opposed to the likely more protracted timeline without their involvement.

“Investing in infrastructure means investing in tangible assets that generate stable and predictable returns – which is aligned with our clients’ long-term needs. With CDPQ, our model dedicated to the execution of major public infrastructure projects, our vision is to be a trusted partner for governments around the world as they try to solve their infrastructure challenges,” CDPQ spokesperson Emmanuelle Rouillard-Moreau told Daily Hive Urbanized.

“Many governments today are heavily indebted. They either won’t or can’t invest in the major projects — like public transit, ports, roads, and bridges — that hold the potential to improve a country’s economic future and communities’ quality of life. As a result, the global infrastructure gap continues to grow every year. Long-term investors such as CDPQ can play a meaningful role in reducing this gap by providing the capital and the know-how to ensure these important projects are executed. It is a win-win scenario.” 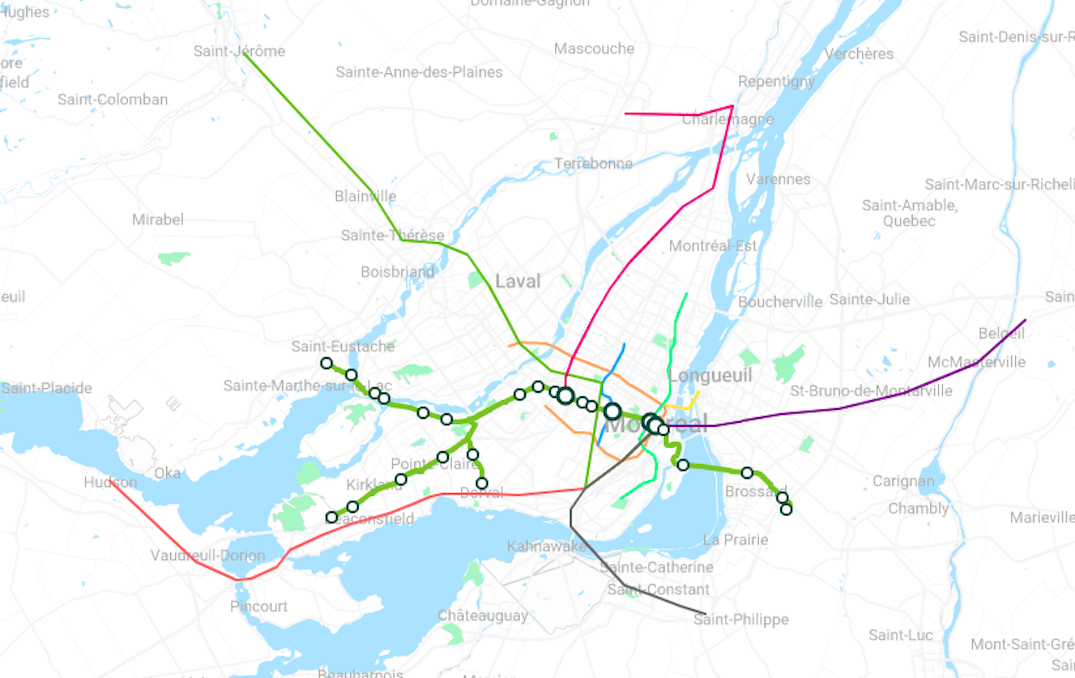 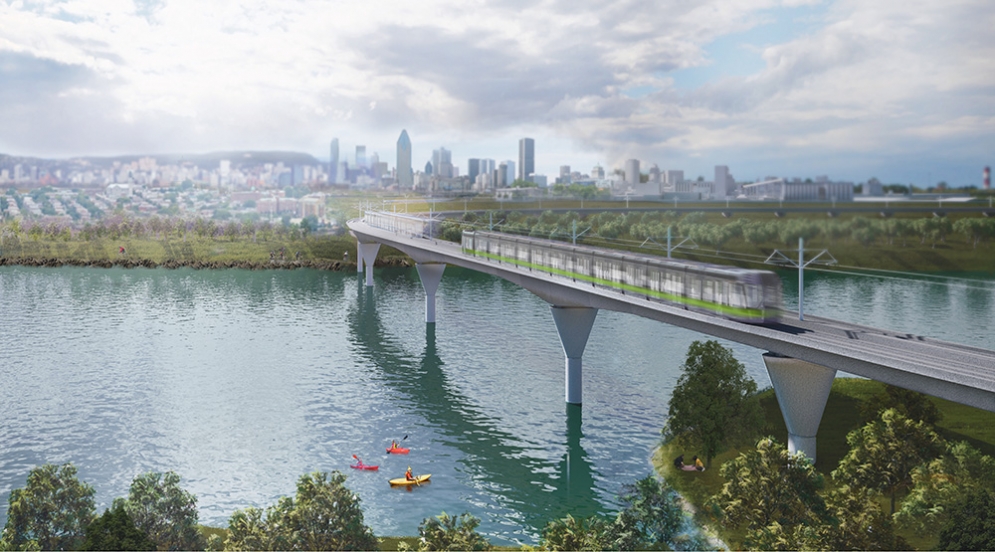 REM bridge between Île-des-Sœurs and the south of Montreal. (CDPQ) 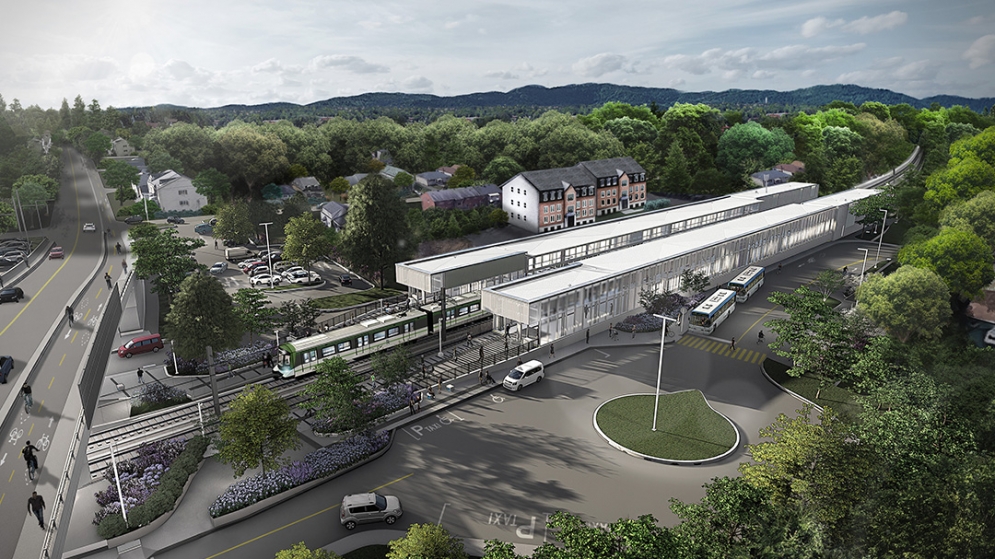 She added that CDPQ has also been able to execute REM at a relatively quick pace as they “made a point of avoiding the linear approach to planning and construction,” which is a slower process used by TransLink and the BC government.

“Operating on a single track — with Decision A followed by Decision B followed by Decision C — can be a recipe for delay and inertia. Instead, we chose to function with a design-build model. We are moving along in parallel on several fronts, which means we are allowing for progress to begin immediately on certain aspects such as planning and land acquisitions while we are ironing out design elements and compliance,” continued Rouillard-Moreau.

“Local governments and countries provide the infrastructure people need to work and live better, and long-term investors can generate the reliable returns and predictable cash flow they need over time, all the while advancing public interest.”

BC’s new partnership with JOIN could also potentially be beneficial to BC, Washington state, and Oregon’s proposal to build a high-speed passenger rail line between Metro Vancouver, Seattle, and Portland.

It is also thought that Japanese train manufacturers were interested in bidding for TransLink’s new generation SkyTrain fleet arriving later this decade. In the end, TransLink selected Bombardier Transportation (now known as Alstom) to build 41 five-car trains for the Expo and Millennium lines at a cost of $723 million, which will arrive between 2024 and 2027 to serve the Millennium Line Broadway Extension, boost overall network capacity, and replace the aging Mark I cars from the 1980s and early 1990s.

“Building this partnership with JOIN is a great step forward in BC’s Trade Diversification Strategy, which is a key pillar of the StrongerBC Economic Plan,” said George Chow, BC minister of state for trade.

“We are focussed on exploring more ways for BC businesses to connect with new international partners and helping leverage our BC brand to create more economic opportunities at home and abroad.”