The love for Vancouver’s late, great “Penis Satan” statue is still going strong. Now there’s a Kickstarter campaign to fund the erection of a duplicate to replace the renegade piece of eye-catching art.

The fundraising campaign has a goal of raising $2,345 to commission a new statue of a bright red devil with a prominent male appendage. Campaign creator Kyle MacDonald, best known for his One Red Paperclip project, admits the dollar amount was just pulled out of thin air.

“I figure we can create a legit weather-proof satan penis statue for that price,” MacDonald told Vancity Buzz. “No idea about the materials or methods but I figure that stuff will work itself out if people come forward to help make this wonderful statue happen.”

What’s so wonderful about a massive piece of guerrilla art depicting a sexually exited devil? MacDonald calls the original piece, which popped up on the morning of September 9, and was taken down by the City of Vancouver hours later, “a wonderful example of local artistry that provides variety and contrast to the status quo of hundreds of established religious facilities in the city.”

MacDonald also believes the statue was location-specific social commentary, drawing attention to what he calls “probably the most overlooked and pointless public park/space in the city.” The statue was placed on a long-vacant pedestal at Clark and Grandview Highway in the Grandview-Woodland area.

The City had no comment on the nature of the statue, only that it was not sanctioned by them, therefore it had to come down. MacDonald says he expects the city to make conservative choices when it comes to public art, and that it’s up to the public to break the boundaries. 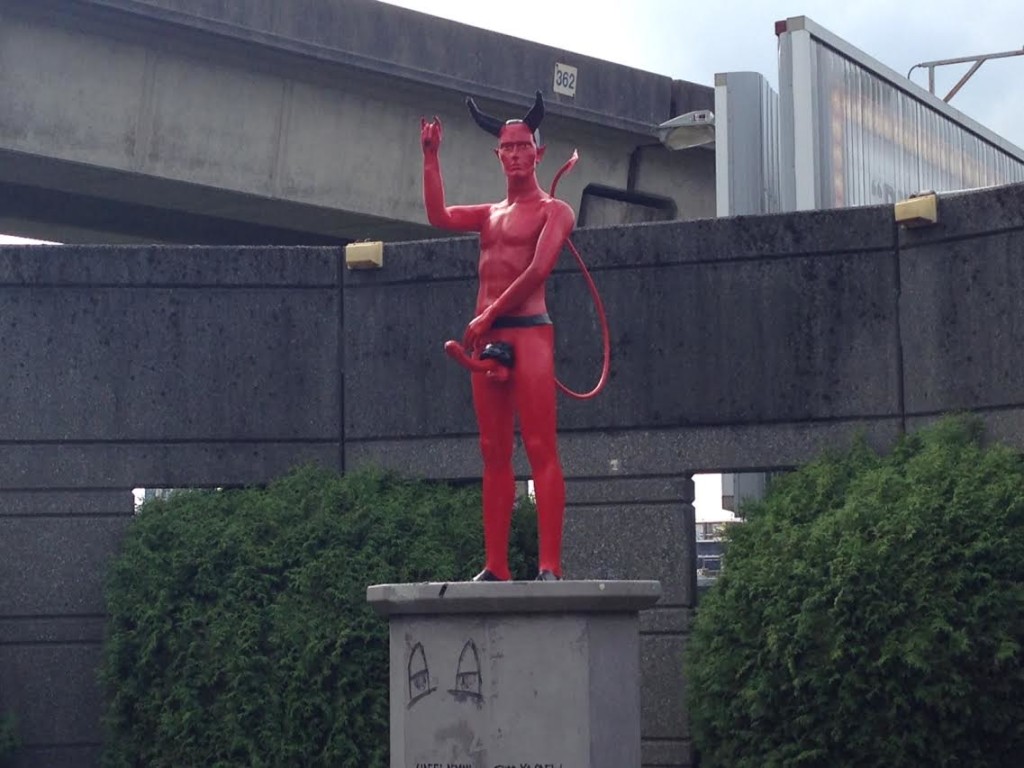 It’s a public, however, that might be a little conditioned for the tamer side of art. “The fact that such a silly statue drew so much attention in the first place shows how Vancouverites are very under-exposed to renegade artwork,” notes MacDonald.

The original creator of the “Penis Satan” statue–which, incidentally, was broken during the removal, and was destined for the landfill–has not come forward, but MacDonald says he’d be eager to work with them to have them recreate their piece. And, he reassures the mysterious artist, he is not a cop.

MacDonald, like the rest of us, can only speculate why the “Penis Satan” statue was put up in the first place. “It was erected to show the world that the devil is well endowed and knows how to party,” he offers.

For fans of the one-day only art installation, backing MacDonald’s Kickstarter comes with some cheeky perks, like a trip to Branson, Missouri (airfare not included) or a “Dinner with the Devil” option.

In the meantime, a petition campaign to bring back the fallen statue with the fantastic phallus is about halfway to its signature goal.

Will the “Penis Satan” statue rise again? Sounds like it’s up to you, art lovers!