With a fresh renovation bringing renewed interest to BC Place, residents continue to voice their dissatisfaction with the three bright video screens surrounding the stadium.

The B.C. Pavilion Corp (PavCo) has received a fair amount of criticism following the renovation of BC Place in 2011. Having undergone extensive updates prior to reopening on September 30th of last year, BC Place traded its air-supported dome for a cable-supported retractable roof, the largest of its kind in the world. While this upgrade came with great updates to both the interior and exterior of the stadium, it also brought about some features that have received mixed reactions from residents: a state-of-the-art light display surrounding the entire roof of the building, as well as three large digital billboards.

The roof lighting around the building is quite spectacular, transforming the stadium into a Vancouver centerpiece. This lighting makes for an iconic image after dusk, illuminating the False Creek area beautifully, especially when paired with Science World. Illuminated from 5:30am to sunrise, as well as from sunset to 10pm most evenings, the lighting is heavily customizable and events can have the stadium sponsor them by altering the colours displayed. While some people are not fans of the roof’s design, it is undeniably unique and an interesting new addition to the Vancouver skyline. This roof lighting system is fairly low-impact though and has (seemingly) not been much of a bother to residents. The digital billboards are definitely another story.

Larger than city bylaws allow for, and at times obscenely bright, the three screens surrounding BC Place have become a contentious issue for residents. Walking past the stadium, it is clear why residents take issue with the signs. The billboards facing north towards the Georgia Viaduct and south towards the Cambie Street bridge are nothing incredibly out of the norm, but are definitely quite bright in the evening. The Georgia Street billboard in particular has received a fair amount of complaints, as it faces a few apartment buildings. However, there is an even bigger issue represented by the large screen in Terry Fox Plaza, facing out along Robson Street towards Yaletown. In sheer size, it is unbelievable and completely overshadows the Terry Fox memorial located there. At night, the screen lights up the entire neigbourhood. If facing anywhere else, this might have been acceptable, but it is facing a well-populated section of the downtown core. I find it incredibly unsurprising that people have taken issue with it. 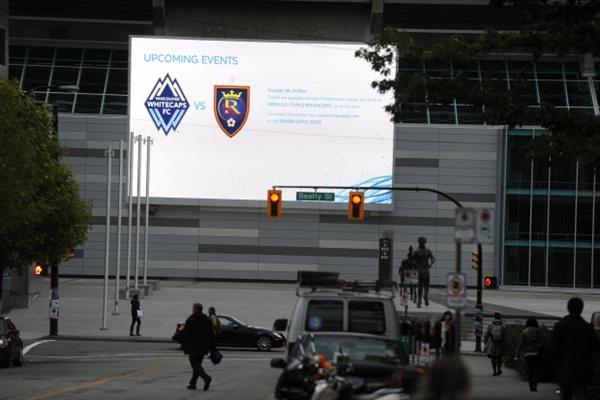 While City of Vancouver councillor Geoff Meggs tabled a motion seeking to force PavCo into abiding by City of Vancouver regulations, this only resolved that council direct City Manager Penny Ballem to advise the crown corporation to submit an action plan related to making the three digital signs compliant with City sign bylaws. It does, however, stipulate that the failure to produce such an action plan is grounds for the City seeking further options to solve the problem. It remains to be seen whether this will do much, while residents continue to voice their displeasure. With strata bylaws stopping a large number of apartment owners in the area from installing black-out curtains in their apartments, some sort of compromise seems like a necessity.

At the end of the day, there are disadvantages associated with living near a stadium, which can act as a central congregation space for a wide variety of people. The lights and sounds associated with sporting venues is not a new issue, and it should be expected that nearby residents took these concerns into consideration when deciding to move into an entertainment zone. However, there should also be the reasonable expectation that these billboards will be non-invasive and that developers will take into consideration the wishes of surrounding residents. While PavCo has appeared willing at times to work together with residents to meet their needs, whether this has materialized in a clear manner remains to be seen. A community gathering hosted by PavCo seems to be a logical next step, allowing both sides to prevent their points of view, as well as allowing residents to have their voices heard. If this fails to create any sort of resolution, the City may have to step in. It would also be interesting to see how much revenue the advertising on these screens bring in. In addition, with Telus having installed screens here as part of their unsuccessful bid to rename the stadium, and the subsequent refusal to reimburse them for it, the future remains unclear.

If anyone lives in one of the buildings near BC Place, it would be awesome to hear from you. Has the lighting become second-nature for residents or does the lack of consultation bother you? Has the recent rejection of Telus’ bid to rename the stadium overshadowed this issue? Sound off in the comments below!