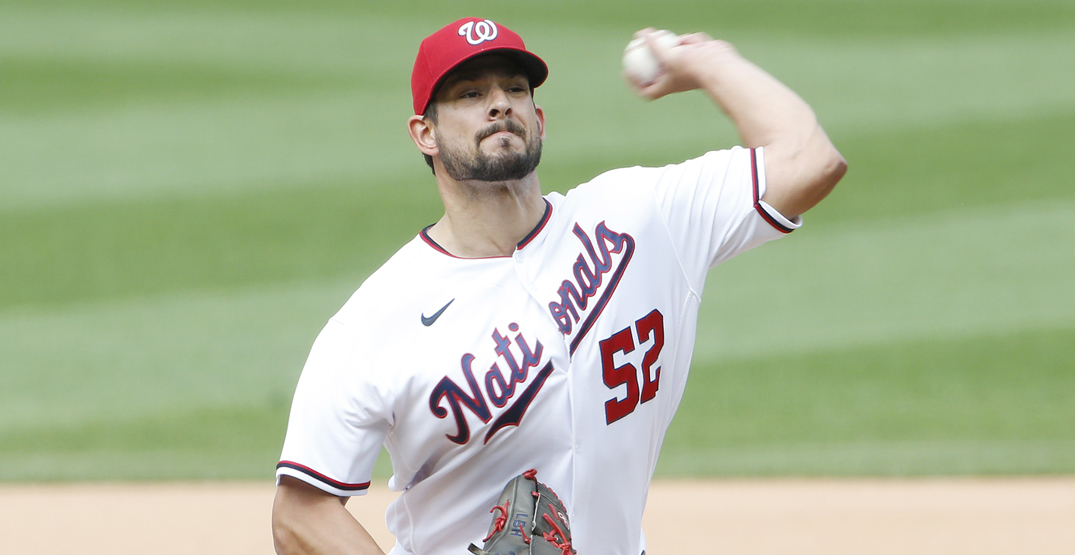 Ladies and gentlemen, give a hand for the Toronto Blue Jays’ brand new closer. *Audience groans*

Earlier today, the club announced a deal for reliever Brad Hand from the Washington Nationals for catching prospect Riley Adams. It’s a straight up one-for-one trade, as the Jays get the Nats closer, and Washington builds some catching depth in return.

Earlier this year, before the Blue Jays pivoted to sign veteran reliever Kirby Yates, the team had interest in the three-time All-Star, Hand. He opted to sign with the 2019 World Series champs on a one-year, $10.5 million deal.

In a very roundabout way, the Blue Jays got the reliever they were gunning for, albeit only for the final two months of the season. Hand joins Adam Cimber, and Trevor Richards as the latest additions to the recently overhauled Blue Jays bullpen.

Hand was having a great year for the Nationals, pitching to a 3.59 ERA with 21 saves and 42 strikeouts in 41 innings of work. With 347 appearances and 201 games finished dating back to 2016, you’d be hard-pressed to find a more durable reliever on the trade market.

The Blue Jays parted with Adams, their 25-year-old catching prospect. He had a cup of coffee with the team at the big league level and posted solid numbers at triple-A this year, slashing .239/.371/.487 in 35 games with the Buffalo Bisons.

With a bevvy of backstops at their disposal, Adams would’ve been exposed to the Rule-5 draft this offseason, for which the Blue Jays would’ve received nothing in return. At least this way, they get two months of a reliable reliever for a catcher they could’ve lost this offseason.

Hand leapfrogs to the top of the Blue Jays’ bullpen core, which looks vastly different compared to a month ago. High leverage innings now belong to Hand, Jordan Romano, Cimber and Richards.

The Blue Jays’ front office has addressed the state of the bullpen and Toronto’s relievers have more or less stabilized after a very shaky month of May and early June. Over the last 30 days, the Jays’ bullpen ERA is 4.06, which is middle of the pack in MLB.

With less than 24 hours left until MLB’s non-waiver trade deadline, it will be interesting to see if the Blue Jays try to acquire more rental-type players, or if they go the controllable route.

More than anything, this deal was a clear signal from the front office they still view themselves as contenders. There’s still plenty of baseball left to play, and beefing up the bullpen was the Blue Jays’ first move to solidify this roster for a potential second half run towards the postseason.