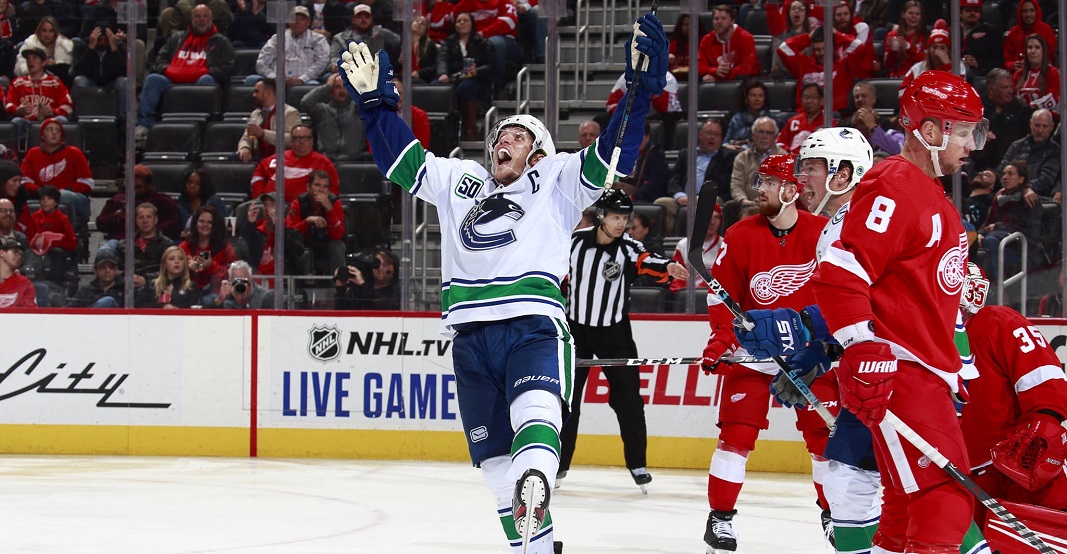 Less than two weeks after being named captain of the Vancouver Canucks, Bo Horvat is already showing why he is the right man for the job.

The 24-year-old scored his first career hat-trick on Tuesday and he did it in style, leading his team to a 5-2 come-from-behind win over the Detroit Red Wings.

Down 2-0 after 40 minutes in Detroit, Horvat scored on the power play less than two minutes into the third period to inject life back into his team.

Pssst, we need a goal #Canucks. Can anyone help out?
Horvat: 🙋‍♂️ pic.twitter.com/oUT05fijGG

Then, on another power play a couple minutes later, Horvat found the back of the net again, this time deflecting a puck past Jimmy Howard to tie the game at two.

Pssst, we need another goal #Canucks. Anyone?
Horvat: 🙋‍♂️ pic.twitter.com/GOccV2yLTw

It looked like Horvat may have scored his third goal when the Canucks took a 3-2 lead halfway through the period, but it was credited to Jake Virtanen after bouncing in off a defender.

After Tim Schaller scored to make it 4-2, Horvat was out in the final minutes and found the empty net from long range to secure both the game and the hat-trick.

Five goals by the @Canucks in the third, including three from @BoHorvat to notch the @Enterprise hat trick. pic.twitter.com/ka4DwJcDvW

It’s just the sixth time in franchise history (and first since 1993) that the Canucks scored five times in a third period, and it came after the team had scored just three goals in their previous eight.

The win wraps up the Canucks’ first road trip of the year on a positive note, going 3-1 with two of those wins being third period comebacks.

In previous years, the Canucks would’ve withered away in the final period of a road trip when faced with a deficit, but this team had arguably their best period of the season to keep the momentum going. They’ve now won six of their last seven games.

Another special part about Horvat’s first hat-trick is that — with the game within driving distance of his hometown of Rodney, Ontario — he had over 70 family members and friends in attendance to see him do it.

There were more than 70 Horvats at the game. @BoHorvat will be hugging for hours. 🤗😳 pic.twitter.com/xos07FZHM2

Horvat and the Canucks are next in action on Friday, and they’ll hope to keep the momentum going back at Rogers Arena with the always-dangerous Washington Capitals in town.