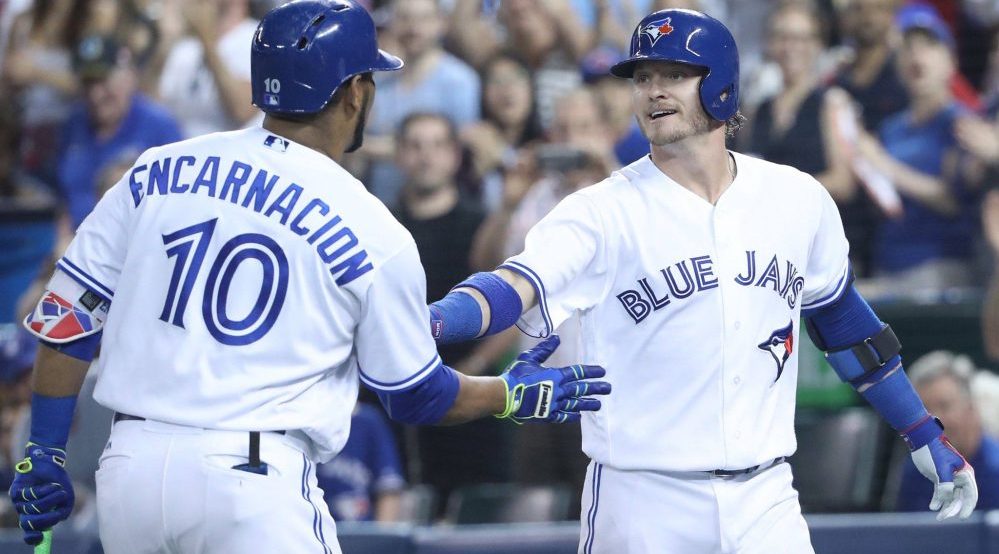 With the unofficial first half of the season now in the books thanks to the American League’s 4-2 victory over the National League in the MLB All-Star game, it’s time to take a look ahead to the second half. Let’s investigate if the Toronto Blue Jays can do what it takes to make the playoffs and take advantage of the World Series home field advantage they earned on Tuesday night in San Diego.

What to look for

Mark Shapiro and Ross Atkins will be listed as buyers on many of the big names available in the trade market, but it remains to be seen if they have the ammunition to acquire any of the big guns. Look for the Blue Jays to try to add a left handed bat like Cincinnati Reds outfielder Jay Bruce to help break up their right handed dominant lineup, a mid-rotation starter, and of course, bullpen help.

"I expect the Jays to be active" – @Ken_Rosenthal on the Blue Jays potentially making moves at the non-waiver trade deadline.

Even with the American League’s second best starting rotation ERA of 3.76, buoyed by unexpectedly great first half performances by J.A. Happ and Aaron Sanchez, the Jays will be looking to add another starting pitcher to their staff due to Marcus Stroman’s inconsistency, Marco Estrada’s uneven health, and R.A. Dickey being R.A. Dickey.

Names like Oakland’s Rich Hill and San Diego’s Drew Pomeranz will be mentioned, but the asking price for these arms might be out of reach for the depleted farm system of the Blue Jays. With their division foes in Boston and Baltimore also in the market for starting pitching, don’t be surprised if the Blue Jays stand pat with their rotation in the hopes that they can sustain their first half success and get a bounce-back performance from Stroman.

As for the bullpen, don’t expect any major moves until the team decides what they want to do with Aaron Sanchez.

If and when he returns to the bullpen, combined with the addition of veteran left-hander Franklin Morales from the disabled list, only then you may see some shuffling of the deck chairs. If Brett Cecil can recapture his dominance from last season and if Drew Storen sorts out his first half issues, the bullpen becomes less of a concern for the stretch run.

The #BlueJays have had the toughest schedule to-date of any team in baseball. This bodes well. https://t.co/gvtM8A7Pv1

Ten games in ten days starts with a home set against the team they are chasing in the AL East. Then the Blue Jays go on the road for seven games against two playoff teams from 2015.

This set features a nine-game road trip against division rivals. If they get off to a slow start in Baltimore, they will be forced to claw back games in two cities where they have historically struggled.

The final ten games of the season that will most likely decide the Blue Jays’ fate, just the way the schedule makers planned it. If the games find themselves more than three games back prior to this stretch of games, taking as many of the home games as possible will be vital. It should be fun to watch.

Whether the team wants to acknowledge it or not, 2016 is the Toronto Blue Jays’ window for success. With Jose Bautista, Edwin Encarnacion, and Michael Saunders set to be free agents at the end of the season, the offence of the team will look very different in 2017, so they need to go all-in this season if they hope to win the team’s first World Series in 23 years.

What that means is Mark Shapiro and Ross Atkins will need to make some very hard decisions about what to do with Aaron Sanchez, and what farm hands they are willing to give up to help the team over the remainder of the season. Unfortunately, Shapiro and Atkins have stated they wish to rebuild the team’s farm system and have a track record of being conservative when it comes to building a major league roster.

Will management and ownership have the intestinal fortitude to push all their chips to the middle of the table and give this city a baseball team they deserve?

I guess we will find out over the next 71 games.