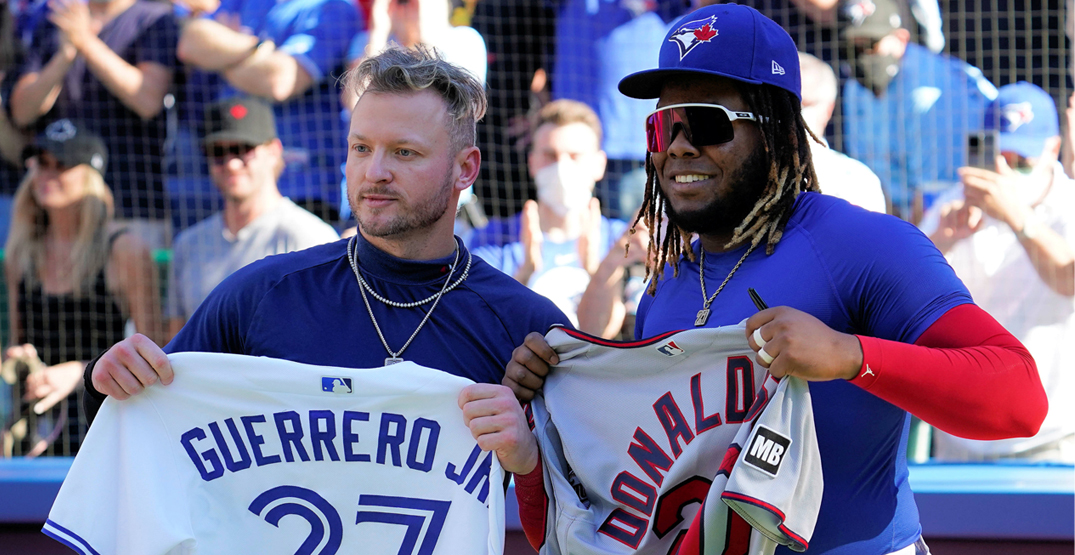 Nearly six years ago, Josh Donaldson put one of the finishing touches on his MVP campaign; a walk-off home run in front of the crowd at Rogers Centre for the final home game of the regular season.

His teammates tore his jersey to shreds, and popcorn was flying everywhere. It was the perfect ending for home fans that capped off a Cinderella second half for the 2015 Blue Jays.

This year, Vladimir Guerrero Jr. is doing everything in his power to repeat history, gunning for his own American League MVP award. It was a passing of the baton of sorts as the former Blue Jay and 2015 MVP swapped jerseys with the Blue Jays’ leading candidate for the 2021 award.

Following the Blue Jays’ 5-3 victory over the Minnesota Twins, Donaldson and Guerrero posed for photos and signed and exchanged their own jerseys in a very cool moment witnessed by the home crowd.

Guerrero said he approached Donaldson during Saturday’s game and asked for one of the third baseman’s jerseys, and the Bringer of Rain reciprocated and agreed to make the swap after the final out of Sunday’s game.

“Donaldson has been great to me since I was in spring training and I was young,” Guerrero said through translator Hector Lebron during a post-game interview with Sportsnet’s Hazel Mae.

“He always helped me and gave me a lot of advice, especially as a third baseman. We used to take a lot of ground balls together. He’s great.”

The former Blue Jay threw his weight behind Guerrero for the 2021 MVP award, telling the Toronto Sun’s Rob Longley that he believes Vladdy should win over Los Angeles Angels phenom Shohei Ohtani.

Guerrero leads two of the three American League triple crown categories with a .321 batting average and 46 home runs on the season. He trails Jose Abreu of the White Sox and Salvador Perez of the Royals in the RBI department.

Donaldson and Guerrero never crossed paths on the field in a Major League game as members of the Blue Jays, but as an up-and-coming prospect, Vladdy would’ve crossed paths with Donaldson during spring training camps in 2016, 2017, and 2018.

After winning his MVP award in 2015 and helping lead the Blue Jays to two consecutive trips to the ALCS in 2015 and 2016, the Blue Jays traded Donaldson to Cleveland at the August waiver trade deadline (back when that was a thing).

Guerrero made his Blue Jays debut the following April as the hottest prospect in baseball and essentially took the torch from Donaldson as one franchise player at the hot corner to another.

It took a few years, but by putting forth one of the best offensive seasons in Blue Jays history, Vladdy is well on his way to making a case for his first Most Valuable Player award, and perhaps a few more in the future.