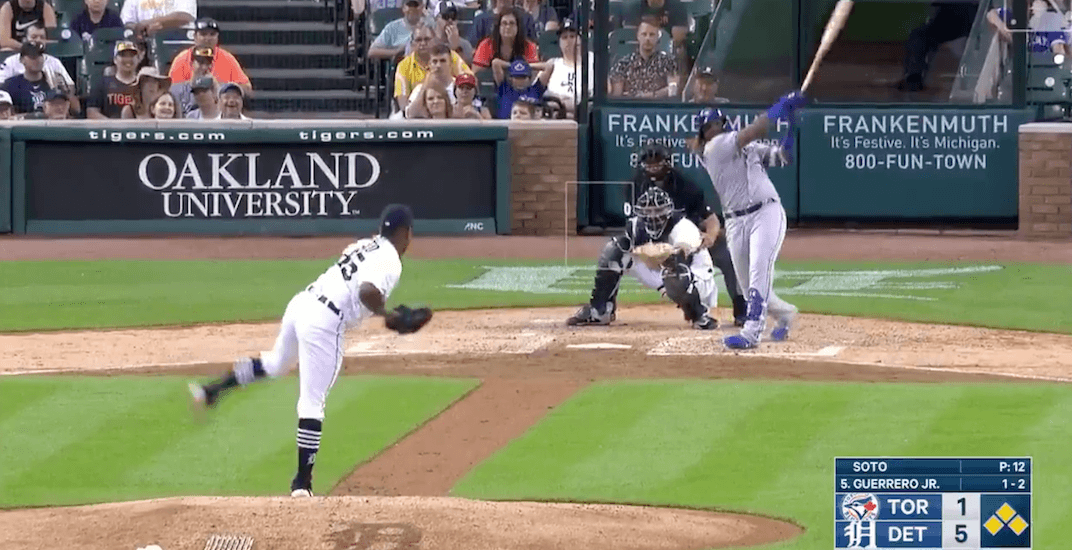 Over his last 35 games, Vladimir Guerrero Jr. has struggled mightily at the plate. He hit one home run and collected eight extra-base hits during a 35-game span from June 6 to July 19. That signature Guerrero power was nowhere to be found.

Until July 20th, when Vladdy’s power suddenly shot back into his bat like a bolt of lightning.

The 20-year-old notched his ninth home run of the season; a majestic game-tying grand slam off Gregory Soto. This home run measured at 441 feet long and was hit off the bat at a speed of 107.6 miles per hour.

Not only did Guerrero dig himself out of an offensive funk, but he also he made history with one swing of the bat. He became the youngest player in Blue Jays history to hit a grand slam, usurping Brett Lawrie.

Vladdy is the youngest player in franchise HISTORY to hit a Grand Slam! #PLAKATA 💥 pic.twitter.com/dOFVvn22wg

But there’s more! Vladdy becomes the sixth youngest player in American League history to club a grand slam. Guerrero joined Blue Jays teammates Cavan Biggio and Rowdy Tellez to collect four grand slams total by Blue Jays rookies this season. According to Hazel Mae of Sportsnet, that ties an MLB record for most grand slams in a season by rookie players.

Guerrero had been suffering through a dry spell and hadn’t homered in 15 consecutive games. His one home run in 35 games was the worst stretch of the 20-year-old’s rookie campaign as he slashed .234/.317/.313 with a .630 OPS dating back to June.

It took a month-and-a-half, but Guerrero finally displayed some of that colossal home run power the Blue Jays have been desperately missing from their starting third baseman.