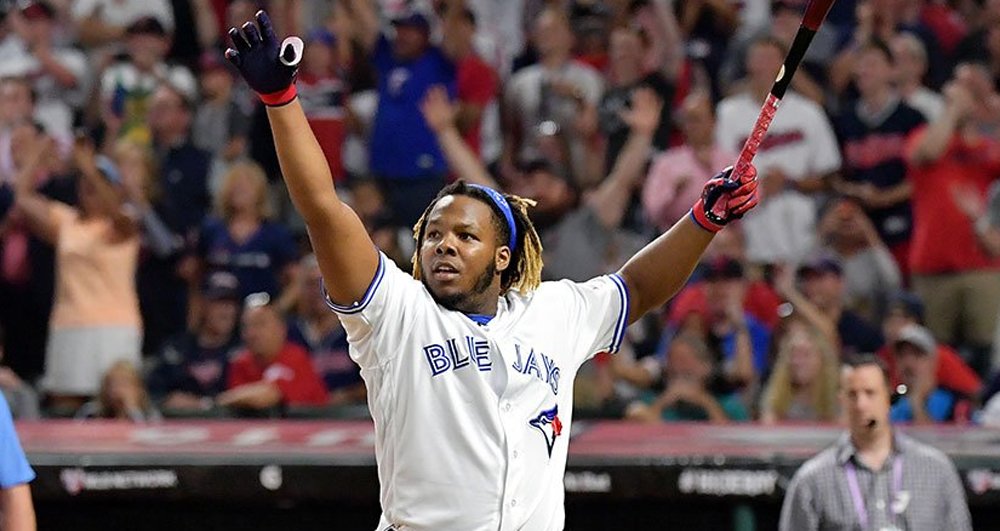 He wasn’t crowned the king of MLB’s Home Run Derby, but Vladimir Guerrero Jr. stole the show in Cleveland. The Blue Jays’ slugger clubbed 91 total home runs in the Derby but lost in the final round 23-22 to New York Mets’ rookie sensation, Pete Alonso.

Vladdy dazzled during arguably the best Home Run Derby in the 34-year history of the event. He was the youngest competitor ever in the history of the competition and he obliterated previous records.

Guerrero destroyed the previous single round Home Run Derby record from 2008 set by Josh Hamilton, who hit 28 home runs at Yankee Stadium. Vladdy also eclipsed the previous record for most home runs total by a single batter in one derby, set by Giancarlo Stanton in 2016 with 61.

In the process, Guerrero put his name on the map as one of MLB’s bright young sluggers.

Not only did Guerrero break the previous record for most home runs in a single round of the Home Run Derby with 29, but he also matched that number and then broke it again with 40 total home runs in the semi-final round versus Los Angeles Dodgers slugger Joc Pederson.

Interestingly enough, Guerrero’s 91 total home runs through three rounds of the Derby bested the 57 hit by Alonso, but due to the format of the final round, it didn’t take into account home run totals from previous rounds. Regardless, Guerrero outhit his counterpart by 34 home runs.

Vladdy began the first round by clubbing 29 home runs versus Matt Chapman of the Oakland A’s. The second round was when things really heated up, as both Guerrero and Pederson tied with 29 home runs, were tied again after an extra round and then participated in not one, but two swing-offs.

The 20-year-old Blue Jays rookie eventually bested the Dodgers outfielder, but not before totalling 40 home runs in the semi-final round. The rigours of swinging for the fences all night may have finally caught up to Guerrero as he ‘only’ hit 22 home runs in his final round.

As the Blue Jays’ sole All-Star Game representative, Marcus Stroman was simply happy to watch history as his teammate sent missiles into the stands at Progressive Field.

That was unreal. Beyond thankful I could witness in person. You’re a legend young king! #VLADDYJR @BlueJays pic.twitter.com/DkyaKhwLKR

…while his father was clearly impressed too.