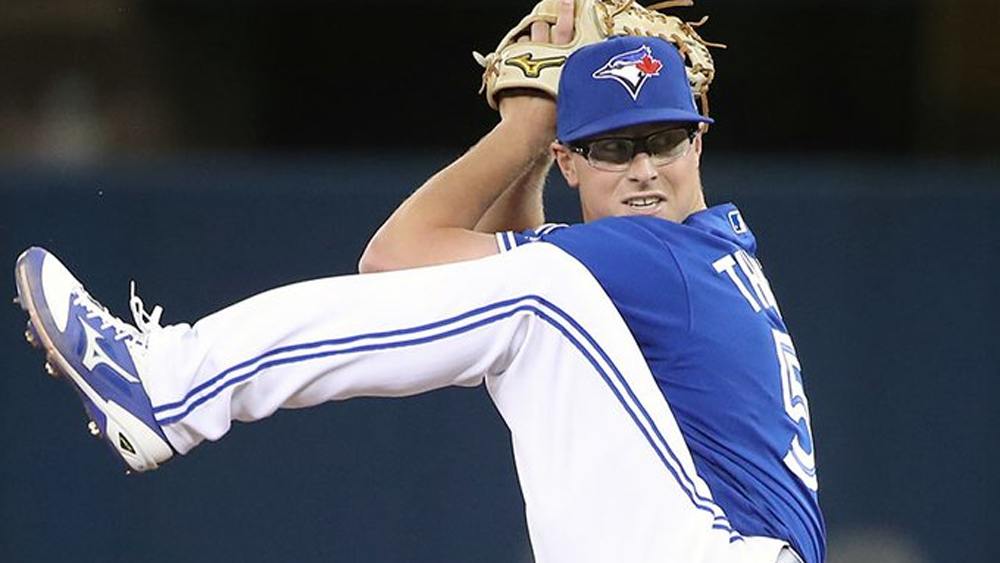 The Toronto Blue Jays are only 3.08 percent of their way through the 2019 campaign, which means there’s a lot of baseball left to play. Nobody should get too excited about what they’ve seen from this team thus far, but the early returns on Trent Thornton look very promising.

The 25-year-old rookie made his first big league start on Sunday and set a new franchise record with eight strikeouts in his MLB debut. Thornton’s GameScore of 71 is the second-highest debut for a Blue Jays starter ever.

Armed with a wicked curveball, Thornton undeniably has a Major League-calibre repertoire. He used that pitch mix to his advantage against the Detroit Tigers, who figure to be one of the lowest-scoring lineups in the AL this year.

In spite of the subpar quality of the opponent, there were a lot of positive signs from Thornton’s debut. Among them, the curveball — his signature pitch — was better than advertised.

At the time of his acquisition, Thornton was heralded as a Statcast darling due to the spin rates on his curveball and fastball. One game into his Major League career and Thornton’s curveball might actually be better than advertised.

He utilized that pitch 24 times against the Tigers and caused them to swing and miss five times. When the Tigers weren’t whiffing on Thornton’s curveball, they were watching his hook land squarely in the zone for a called strike.

The most impressive aspect of Thornton’s curveball is his ability to spin the ball with that pitch. One game into the 2019 season and he’s already among MLB’s elite curveball spinners.

One game is an extremely small sample size, but Thornton owns the fourth highest curveball spin rate in baseball. He averaged 3053 RPM in his MLB debut and maxed out at 3201 RPM with one of his curveballs.

For those who want to dive even further down the rabbit hole of advanced statistics, Thornton’s curveball measures at 37.83 Bauer Units (spin rate). League average on curveballs in 2019 is 32.08 Bauer Units so far this season.

There are a lot of numbers to take in here, but the gist is that a high spin rate on a curveball (especially anything above 3000 RPM) is extremely difficult to square up and make solid contact on. Across MLB in 2018, hitters who faced curveballs with RPM’s of more than 3000 averaged only .196. Batters hit a mere 11 home runs off that 587 pitch sample size.

If Thornton continues to hover around the 3000 revolutions per minute spin rate, it would put him in the same territory as spin rate savants like Seth Lugo, Ryan Pressly and the king of the curveball spin rate: Garrett Richards.

These are pitchers with elite curveballs and Thornton is just beginning his big league career. In his first inning of work, the Tigers’ top of the order fell victim to Thornton’s devastating hook.

Making his MLB debut, Toronto's Trent Thornton strikes out Nicholas Castellanos, Miguel Cabrera and Niko Goodrum in the first inning, all on curves.

It’s easy to see why the Blue Jays coveted Thornton in that trade with the Houston Astros. He already has a killer out-pitch; now he just needs experience at the Major League level.

First pitch in the big leagues for Trent Thornton. A lot of working pieces in that delivery, but it's fun to watch. pic.twitter.com/hrTInEEdV9

Pair that knee-buckling curveball with this funky delivery and Thornton might be one of the most interesting starters to watch on the Blue Jays this year.