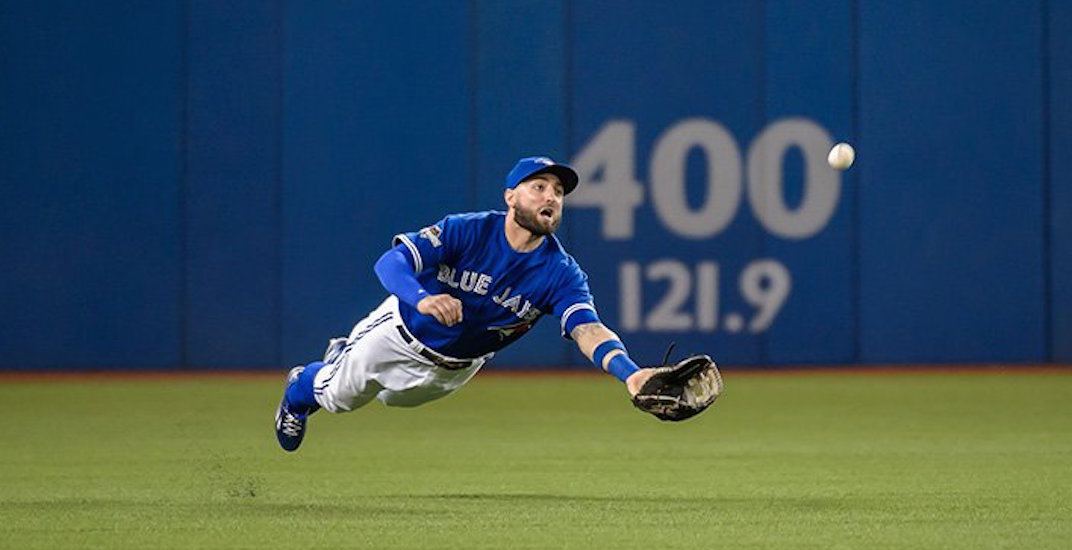 The Toronto Blue Jays have a lot of work to do this offseason. In order to get back to the playoffs, they’ll need to make several moves in order to fill holes in their roster and become a threat once again.

Minor tweaks won’t be enough; the team likely has to swing a few high-impact trades or pull off a couple key free agent signings just for a chance to compete in the AL East.

Middle infield, corner outfield, starting rotation depth and lefty relief are four key areas where the Blue Jays need to do some work this winter.

Here are five moves the Blue Jays should make:

Kevin Pillar may be a fan favourite in Toronto, but this winter may be the best time for the Blue Jays to sell high on their starting centre fielder.

While he soared during the opening months of the 2017 season, as the year progressed, Pillar fell back down to earth and settled back into the hitter he’s always been.

Not only that, but his defence actually took a step back this past season. Traditionally, the 28-year-old has been one of the best defensive centre fielders in baseball, but for whatever reason, his glove wasn’t all there in 2017.

If the bulk of Pillar’s value is derived from his defence and that skill has dropped off, that’s a concerning sign for the Blue Jays. It was one thing when he was making just above the league minimum pre-arbitration. However, if Pillar’s salary skyrockets into the multi-millions through salary arbitration, that’s a lot of money to fork out for a glove-only player.

If the Jays can find a taker for the West Hills, California native this winter, it behooves them to pull the trigger on a deal to send Pillar out of Toronto. The team already has a wealth of outfield depth in the organization: Teoscar Hernandez, Anthony Alford, Dwight Smith Jr., and Dalton Pompey are among the names who could potentially fill Pillar’s shoes in centre field.

2. Trade for Dee Gordon or Josh Harrison to play the infield

The most glaring hole on Toronto’s roster this offseason is middle infield. With Troy Tulowitzki and Devon Travis going down to season-ending injuries in 2017, the Jays were forced to use a revolving door of middle infielders to pick up the slack.

Tulowitzki and Travis may or may not be ready for Opening Day 2018 and relying on them is simply too big of a risk to take. They need somebody to bridge the gap just in case.

Each player can play second base (Gordon also has experience at shortstop, Harrison has played third base and the outfield), and both would provide huge upgrades over what the club paraded out there at second base this past season.

In both cases, Gordon and Harrison could slide in as the Blue Jays’ new leadoff hitter.

Gordon possesses a tremendous amount of speed; something significantly lacking on the Blue Jays roster. With Miami last season, the 29-year-old had a .308 batting average, .341 on-base percentage, two home runs, and 33 RBIs.

At first glance, another starting pitcher might seem like a luxury for the Blue Jays. After all, the Blue Jays basically have five starters in Aaron Sanchez, Marcus Stroman, J.A. Happ, Marco Estrada, and Joe Biagini.

On the other hand, the team went through 13 starters in 2017 season after going through six starters in 2016. A team can never have too much starting pitching and inking Alex Cobb would bolster the Blue Jays rotation that much further.

Cobb put forth a pretty solid season with the Tampa Bay Rays – 3.66 ERA, 12-10, 1.22 WHIP, 128 SO – and has fared pretty well against foes in the American League East. Traditionally, he’s pitched very tough against the Blue Jays with a 2.71 career ERA versus Toronto.

With Happ and Estrada as pending free agents next year, the Blue Jays will need to replace those arms anyway; why not work a step ahead and sign the 30-year-old Cobb as insurance for the starting rotation now?

Adding a player like Cobb to the rotation would also allow the Blue Jays to move Joe Biagini back into the bullpen; a role in which he’s flourished in over the past two years.

4. Trade for Andrew McCutchen to play the outfield

The Blue Jays were rumoured to be interested in Andrew McCutchen last winter, and with one year remaining on his existing deal with the Pirates, his services could be had a reasonable price.

His days as an MVP candidate are well in the rear-view mirror, but McCutchen showed he still has a lot of gas left in the tank as a 31-year-old outfielder. His bat would be a welcome addition to the middle of the Blue Jays’ lineup.

The Blue Jays would need to dip into their prospect pool in order to pry McCutchen from the Pirates, but since it’s only one additional year of control, the acquisition cost wouldn’t be nearly as much as Gordon or Harrison.

Last year, the Blue Jays filled their lefty reliever vacancy by bringing in veteran left-hander J.P. Howell. Ultimately, he pitched in just 16 games before being released by the club in mid-August.

Free agent contracts to relievers (especially lefties, for some reason) can be extremely fickle. However, the team’s deal for Joe Smith worked out and they flipped him for prospects at the trade deadline.

The bullpen might not seem like an area of need, but every bullpen needs a left-handed reliever. Unless someone like Aaron Loup or Matt Dermody emerges as a guy who can throw 50-60 innings out of the bullpen, the Jays will have to go outside the organization.

Jake McGee and Tony Watson are two of the more interesting names out there in the left-handed relief market.

McGee pitched for six years in Tampa Bay before moving to Colorado. He’s coming off a fairly solid season, with a 3.61 ERA in 62 appearances.

Much like his former Tampa Bay teammate Cobb, I like the fact that McGee comes with some AL East pedigree. The 31-year-old has thrived as a reliever against the likes of the Red Sox and Yankees.

If the Blue Jays are strictly looking for a lefty reliever to eat up innings, there isn’t a safer bet than Watson. The 32-year-old has averaged 72 appearances a season since 2012. During that stretch, the former Pirates closer has never had an ERA north of 3.38.

He’d be a nice complimentary piece to add to the Blue Jays’ bullpen in 2018.