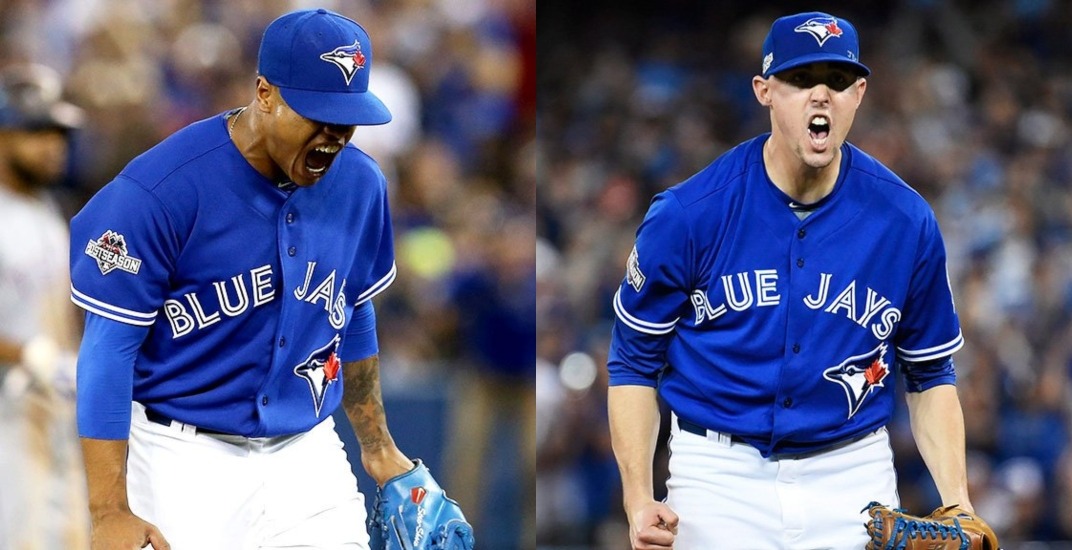 The last time Marcus Stroman and Aaron Sanchez were both healthy in the same season was 2016.

That year, the Blue Jays rode the strength of their starting rotation all the way into the playoffs. Sanchez won an ERA title and finished seventh in Cy Young voting. Stroman struggled at points throughout the season, but finished with 32 starts and 204 innings pitched.

According to a report from Sportsnet, MLB Network’s Ken Rosenthal confirmed one of the worst-kept secrets surrounding the Blue Jays; that they’re shopping some of their veteran players like Stroman, Sanchez and Justin Smoak.

It makes all the sense in the world for the Blue Jays to take offers for Smoak. He’s 32 years old, in the final year of his contract extension, and Rowdy Tellez is nipping at his heels at first base. Subtract Smoak from the roster and the Jays wouldn’t be in bad shape in the near future.

But what would this team look like without Stroman and Sanchez in the near future? Judging by the results from the back-end of their starting rotation, a 162-game schedule without a few battle-tested arms would be pretty rough.

The Blue Jays are in a unique position right now with Stroman and Sanchez. Both are under team control through next season and both are pitching very well to begin their 2019 campaigns. As everyone knows, pitching is a premium at the trade deadline. These two starters look like two of the most attractive trade chips on the market.

The truth is Stroman (age 28) and Sanchez (26) might be more valuable to the Blue Jays as building blocks for the future and not pawns in asset management.

The Blue Jays are on their seventh starting pitcher of the season already and with few options in triple-A, the team will have to dip into their reserves to find innings somewhere. Pluck Stroman and Sanchez from the team and the Blue Jays’ rotation depth goes from thin to barely-there.

Over the next few years, the Blue Jays need somebody to log innings and start games. It’s a fairly basic requirement, but the two most capable arms on the staff – Stroman and Sanchez – give the Blue Jays innings, and on most nights, quality innings. They may not reprise their roles as former top 10 Cy Young finishers, but there is value in having experienced pitchers in a starting rotation.

If the Blue Jays were to deploy five Sean Reid-Foley’s out there, the results could be downright disastrous. As many pitching prospects as the Blue Jays have acquired since last July, there still aren’t enough bona fide pitchers to step in and match the production of Stroman and Sanchez.

None of this works unless the organization can find a way to extend one or both of Stroman and Sanchez. To let both starting pitchers walk as free agents next year would be a massive mishandling of assets, but to bring one back on a three or four-year extension could potentially bridge the gap to the Blue Jays’ next window of contention.

Failing that, the Blue Jays could shop both starters at the trade deadline, but putting Stroman and Sanchez on the block only works if the Jays receive a similar package as the Tampa Bay Rays did last year in exchange for Chris Archer. The Rays picked up Major League-ready pitching in exchange for Archer, and now Tyler Glasnow has looked like one of the best starters in the game since Opening Day. Austin Meadows, another piece in that trade, has been one of the Rays’ most pleasant surprises this season on the position player side.

However, as the Blue Jays are witnessing with Trent Thornton, there are no guarantees when trading away big league talent for up-and-coming prospects. For every Glasnow in Tampa Bay, there’s a Thornton in Toronto.

This season might not be a year of contention for the Blue Jays, but it’s a very important year for intel and development. It’s a season for the organization to see what talent they have at the big league level, which players are ready to take the next step and who forecasts to be part of the future.

According to some people, Stroman and Sanchez aren’t a part of that future, but the near and present looks bleak without those two in Toronto.