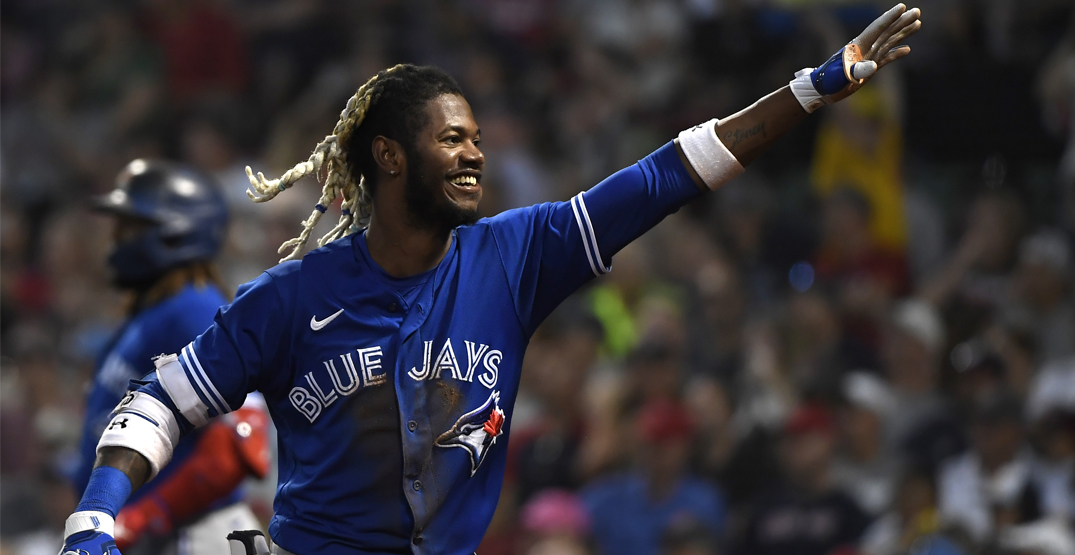 The moment Raimel Tapia hit an inside the park grand slam at Fenway Park, it was inevitable something nutty was going to happen in Boston. And it just got crazier from there.

The Blue Jays set a new franchise record for runs scored in a single game with 28 (and counting) during their series opener against the Boston Red Sox. Yes, 28 runs in a baseball game. This is not a misprint, or a pre-season football game.

This surpassed the previous club record, which was 24 runs during a 24-10 stomping of the Baltimore Orioles back on June 26, 1978.

The game started like any old contest to kick off post All-Star break for the Blue Jays, with an RBI single by Bo Bichette in the first inning, and a two-run home run by Matt Chapman in the second inning. Then, things got weird.

The aforementioned Tapia inside the park homer kicked off the nuttiness, which was only the seventh inside the park grand slam in MLB’s Wild Card era since 1994, and the second in Blue Jays history. It was truly a unicorn of a baseball play.

After only scoring seven runs in the third inning, the Jays chipped in four runs in the fourth inning, and then the fifth inning arrived, and that’s when the starting lineup said to themselves, “let’s get really weird, guys.”

The Red Sox retired the Blue Jays, first two batters of the fifth inning before the Blue Jays had 12 consecutive batters reach base and they pushed across 11 runs. Again, all with two outs.

After a dropped pop-up by the Red Sox at the mound, the Blue Jays capitalized. Sportsnet’s play-by-play commentator Dan Shulman had the quote of the night:

As of this moment, every player in the Blue Jays starting lineup collected at least two hits. Tapia and Danny Jansen drove in six runs, and Lourdes Gurriel Jr. extended his fiery streak and drove in five.

It was a career night for Gurriel, who collected six hits and tied the Blue Jays record for most hits in a game, alongside Frank Catalanotto.

At one point, it looked like the Blue Jays might threaten to set the new MLB record for runs scored in a game, which was 30 by the Texas Rangers back on August 22, 2007. With their 28 runs scored, the Blue Jays scored the fifth-most runs in a single game in MLB history.