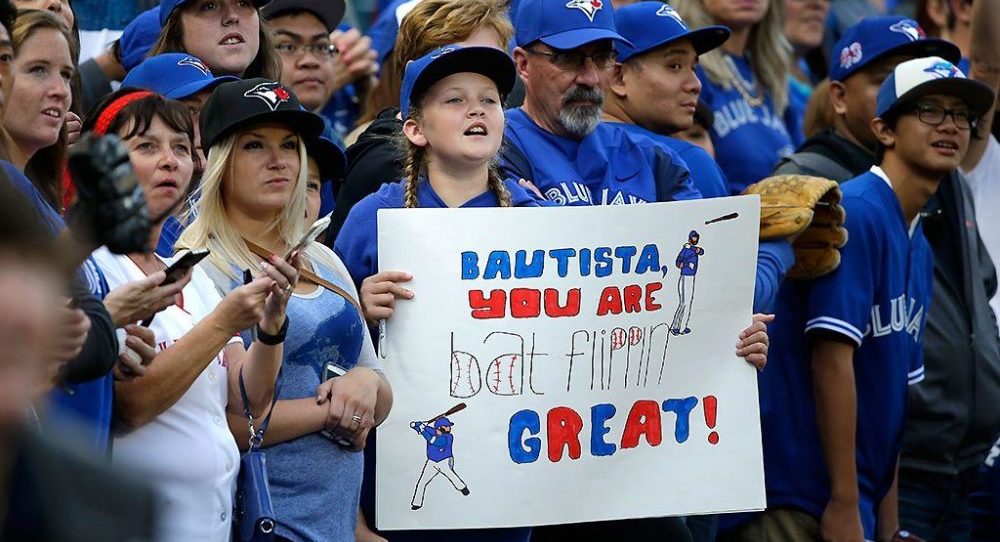 After splitting their four-game series in Anaheim, the Blue Jays returned home to Safeco Field in Seattle for three home dates with the surging Mariners.

Being the polite Canadians that they are, the Blue Jays allowed the Mariners to bat last and managed to take two of the three games against a team that came into the series having won 11 of their 16 games in September to climb within striking distance of a Wild Card spot.

Even though Jose Bautista’s towering, game-tying, 9th inning home run off of Mariners flame-throwing closer Edwin Diaz didn’t propel the team to a three-game sweep, the real story of the series were the droves of Blue Jays fans that made the trek down from British Columbia (and other parts of Western Canada) to turn Safeco Field in Seattle into the downtown, natural grass home park Toronto wishes they had.

The three-game set averaged 35,992 fans, which is 8,132 more than the 27,860 the Mariners averaged before the Blue Jays came to town. And with a Castlegar’s worth of Blue Jays fans in town to cheer on the now home side, with them came the creature comforts of Rogers Centre; like inopportune waves circling the stadium and the always crowd-pleasing Addams Family theme.

Taking over safeco field is not bad enough. The #bluejays fans are doing the wave. Sorry Seattle.

Sure, the Blue Jays offence returned to its moribund state on Wednesday when faced with the type of pitching they are likely to see if they can manage to make it into a playoff game, but at least the fans can take solace in the fact that the players and coaches noticed the Canadian invasion in Seattle this week.

“It’s interesting. You think you’re going to have 81 home games and it’s not the case all the time,” Mariners manager Scott Servais said. “The one thing we haven’t done a good job with, there’s only one way to keep them quiet. You have to come out and get after it and get on them early and then have a shutdown inning and keep adding on.”

So, the next time you think that your attendance at a major league baseball game can’t impact the result of the game, aside from reaching onto the field of play and touching a fair ball, (Side note: please stop doing that Blue Jays fans!) remember that your effort is not wasted. The players notice, they feed off of your energy and sometimes that can be the difference in a ball game.

The Blue Jays have an off-day Thursday and return to Rogers Centre for a four-game series with the Yankees followed by a crucial three-game set against the Orioles which could determine home-field in the Wild Card race.

Until next year, Seattle.

Seattle fans, as you can imagine, weren’t exactly pleased with the invasion of Jays fans. One Mariners fan in particular decided to get creative. Luckily, he decided to share it on social media.

Okay, get ready for this tomorrow: pic.twitter.com/8zAHqP1xOh

This one didn't get released yet. @BarackObama pic.twitter.com/yqLnXLy72i