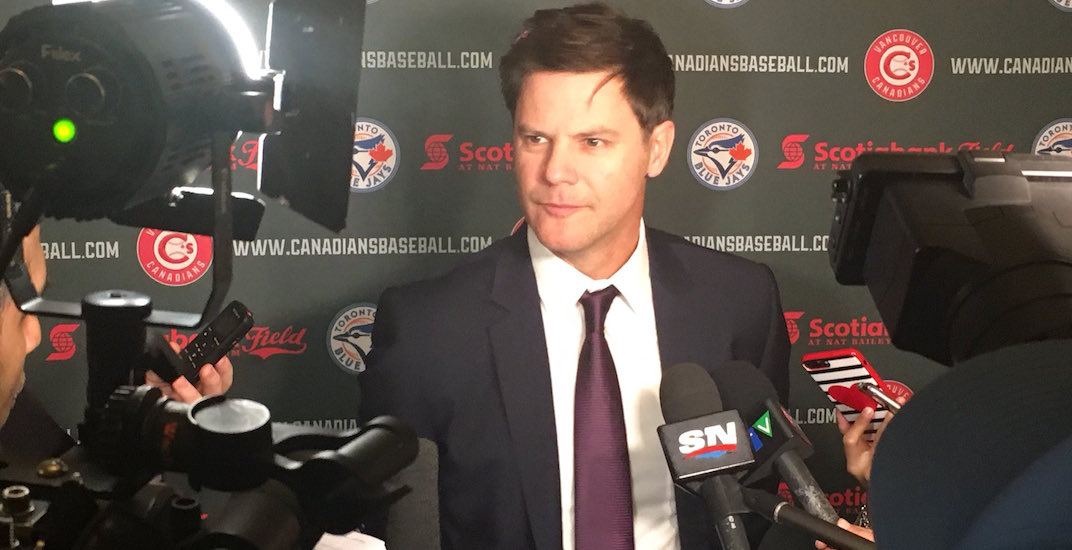 Toronto Blue Jays general manager Ross Atkins took time out of his west coast family ski vacation to join a laundry list of luminaries at the 8th version of the Vancouver Canadians Hot-Stove Luncheon on Friday.

Atkins joined the media for a Q&A covering a wide variety of topics before the official festivities kicked off with an announcement of an extension of the partnership between the Canadians and Blue Jays through 2022.

The first question posed was about the 28th overall pick in the 2017 draft and dominator of Northwest League hitters, pitcher Nate Pearson. I did a lot of gushing over the 6-foot-6 righty this past summer, to the point that my wife was getting a bit worried, but as I’ve said on numerous occasions, I’m not a professional scout.

Lately though, the pros have gotten on board as well, with Pearson making Baseball America’s top 100 prospects list (clocking in at 91).

“It’s unusual for someone to be, I don’t like the word ‘gifted’, but as talented as he is, so strong and powerful and has the tactical and technical attributes to be elite,” said Atkins. “It’s rare.”

I hadn’t really thought about Pearson’s assignment for 2018 – being so caught up in the do they don’t they go to New Hampshire debate for uber prospects Bo Bichette and Vladimir Guerrero – but with spring training rapidly approaching I suspect we’ll hear more on the topic. When asked about whether what sort of benchmarks would need to be achieved for Bichette and Guerrero to be promoted, providing they do start the season in high-A Dunedin, Atkins included both Pearson and the Jays’ other 2017 first rounder Logan Warmoth in his response, saying “it’s all about the teammate, being a good defender, a good base-runner, good both in the clubhouse and around it.”

The prospect of both Warmoth and Pearson skipping Lansing to begin the season in Dunedin with Bo and Vladdy is tantalizing. Having four of the Jays’ top 10 prospects in one uniform would instantly make the D-Jays the star attraction of Toronto’s minor league system.

Another of the Jays’ top 5 prospects (number 60 in BAs top 100), Anthony Alford, is slated to begin the season in AAA Buffalo, along with former top prospect, and good Canadian kid, Dalton Pompey and September star Teoscar Hernandez. With all three viable centre-field candidates, I asked, if you had a lineup card in your hand right now, where would the three be positioned. While I didn’t get the definitive answer I was hoping for, Ross was bullish on all three.

“Really we don’t have to answer that question as they can play all three and that will be the most likely scenario.”

When quizzed on the potential defensive shortcomings of the middle infield at the major league level, given fact both Devon Travis and Troy Tulowitzki are coming off pretty significant injuries, Atkins mentioned how excited they were about Cuban infielder Lourdes Gurriel and Dominican shortstop Richard Urena “being, at some point, in triple-A.”

That would seem to suggest two things. Both will start the season at double-A New Hampshire and that Gurriel will make the move to second base (or potentially the outfield?) permanent. I’m somewhat surprised that, after being a September call-up, Urena wouldn’t get a look at Buffalo. But with off-season acquisition (for former catcher J.B. Woodman) Aledmys Diaz having options and Urena not exactly lighting it up in New Hampshire last season, OPS’ing .645, starting the year in AA makes a ton of sense.

With pitching seemingly now the priority at the big league level, this is interesting.

Final word goes to a prospect from a different generation as Canadians radio man Rob Fai had a ‘fireside chat’ with the Jays first round pick (2nd overall) from 1978, Lloyd ‘Shaker’ Moseby. Asked if former teammate Dave Stieb had been misunderstood, the Shaker paused before replying, ‘no, no he was just a jerk.’

I hope Moseby gets invited back annually.