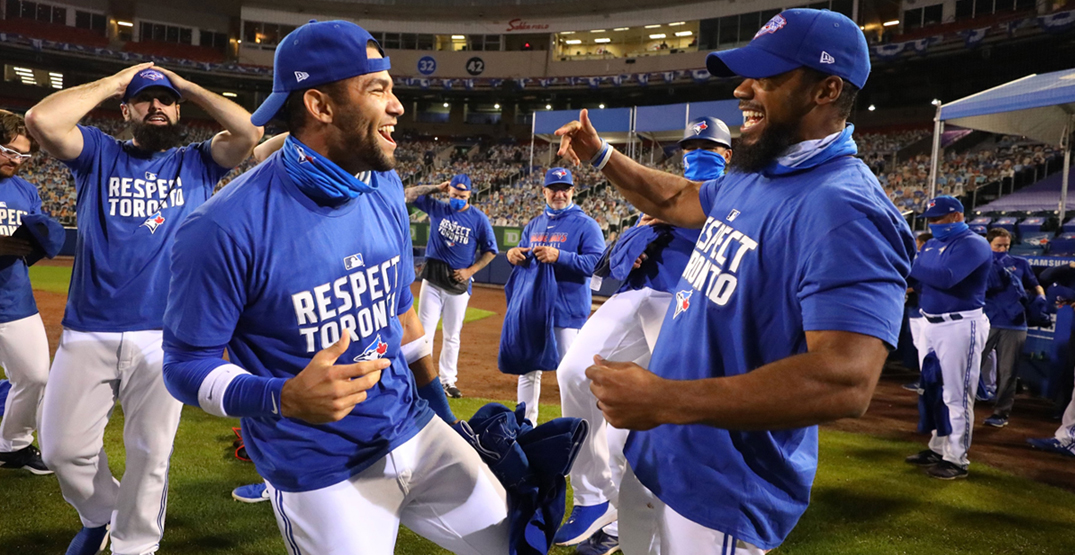 Jays fans are basking in the glow of the team’s postseason berth, the eighth playoff appearance in franchise history. Asterisk or no asterisk because of a shortened season, the Blue Jays are going to the postseason.

The players celebrated heartily after their 4-1 defeat of the New York Yankees, which assures the Blue Jays of a playoff spot and at the very least, they’ll be the number eight seed when MLB’s playoff series kick off next Tuesday.

Teams typically celebrate with a champagne-soaked party in the clubhouse, but MLB wanted to curtail that due to COVID, so this year’s clinching parties were a little more subdued.

The Blue Jays started by taking a team photo on the field at Sahlen Field; the club’s unexpected home away from home for the 2020 season.

This is for YOU, #BlueJays fans! pic.twitter.com/pypWmbpUSc

The Blue Jays had the youngest position player core in baseball this year, and at times, it showed. But it was cool to see the pure jubilation on young players’ faces, like Vladimir Guerrero Jr.

The Blue Jays are dancing all the way into the playoffs. pic.twitter.com/MCvpv9ptLC

Vladdy showed his gratitude to the team’s ace, Hyun-Jin Ryu, and gave him a giant bearhug.

Vladdy giving Ryu a giant bearhug is what we needed to see tonight. pic.twitter.com/AeUGbqKWXr

Backup catcher Caleb Joseph not only provided some comic relief, but he played the part of the grizzled veteran, giving the squad this inspirational post-game speech after the win.

We would run through a wall after this @YYZBackstop speech 🔥 pic.twitter.com/AIhCi0foWo

Blue Jays manager Charlie Montoyo got a little emotional in the afterglow of the final pitch, reflecting on all his team accomplished in a weird, wacky baseball season.

“I’m SO proud of this group” – Manager Montoyo 💙 pic.twitter.com/d9XBzdNYEY

Outfielder Randal Grichuk was just amped to be playing in the postseason again. It’s his first trip to the playoffs since joining the Blue Jays in 2018.

Just like 2015, Blue Jays players strapped GoPro cameras to their heads to capture footage of this momentous occasion. Surely, the footage from those GoPros will be hilarious to watch one day.

Once things settled down on the field, Vladdy came in and crashed the manager’s post-game press conference with reporters.

As of this moment, the Blue Jays don’t know who will be their opponent in the first round, since Toronto could finish anywhere from fifth, seventh, or eighth place in the American League.

But no matter who they play, the Blue Jays will return to the postseason for the first time since 2016. And they’re elated to play under the bright lights of October.