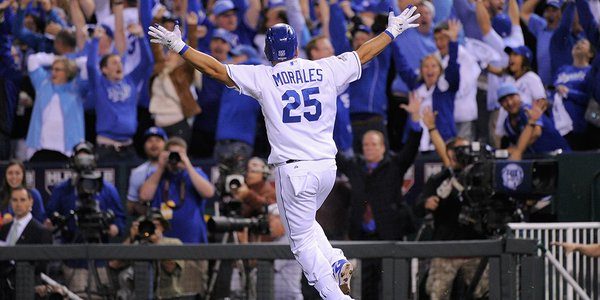 It didn’t take long for fans to get a glimpse of what might be Ross Atkins’ masterplan for the Blue Jays offseason, as the Toronto Blue Jays have reportedly struck a deal with Kansas City Royals designated hitter Kendrys Morales.

At $33 million over three years for the 33-year-old switch-hitting Cuban slugger, the deal could spell the end of Edwin Encarnacion’s time in a Blue Jays uniform. Morales is a career .273 hitter who hit .263 with 30 home runs and 93 RBIs in 2016.

Much like last year’s offseason when the team declined to make an attempt to re-sign David Price and instead used that money to sign both Marco Estrada and JA Happ, Atkins seems to prefer filling multiple holes in the lineup for less guaranteed money.

While the team may still make a further effort to sign Encarnacion, the more likely scenario at this point would be to spend the contract savings in the outfield on someone like Josh Reddick. Reddick is a fit for the team with his left-handed bat and also because, like Morales, he was not given a qualifying offer, therefore there would be no draft pick compensation for signing him as a free agent.

With Morales filling the DH role, look for Atkins to bring in a solid right-handed bat to pair with Justin Smoak, who re-signed for two years in July, as part of a platoon at first base.

If both Encarnacion and Bautista sign with other clubs this offseason, the Blue Jays would receive two draft picks as compensation which is music to the ears of Ross Atkins with his history in scouting and player development.

Atkins and Blue Jays team president Mark Shapiro have previously stated their mission is to re-stock the team’s farm system and have already started to do so this off-season with the signing of 23-year-old Cuban prospect Lourdes Gurriel Jr.

So fans should be mentally prepared for the team to let both Edwin Encarnacion and Jose Bautista walk in free agency.

Now that the weather has finally turned cold here in Toronto, at least we have the hot stove to keep us warm. Even if the recipe Ross Atkins is cooking up doesn’t have all the same ingredients we have come to love over the years.