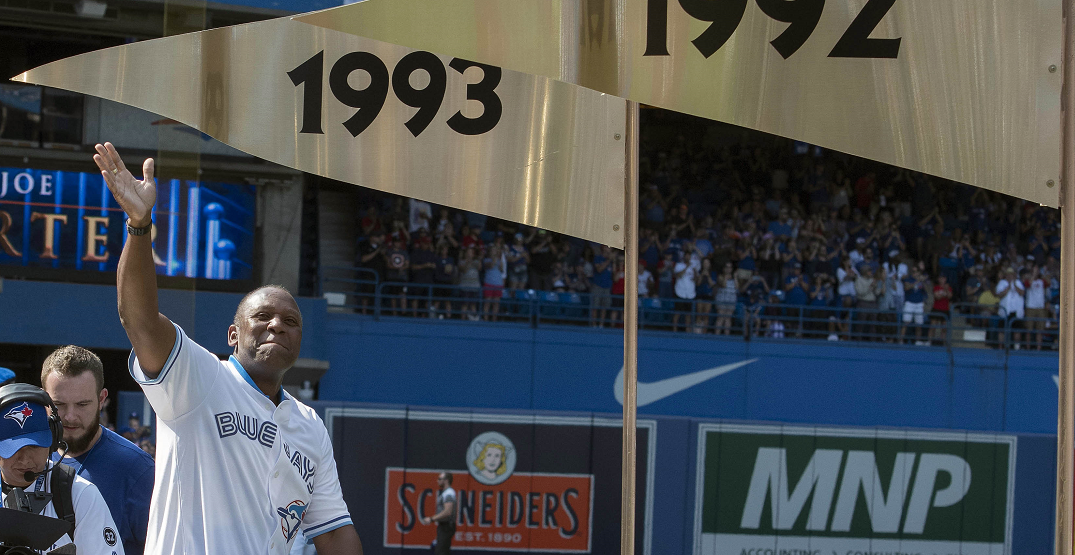 Perhaps more so than any other player in league history, Toronto Blue Jays legend Joe Carter will always be remembered for one fateful swing.

Down 6-5 in the bottom of the ninth inning in Game 6 of the 1993 World Series, Carter stepped up to the plate against Philadelphia reliever Mitch Williams.

With a 2-2 count and two runners on base, Carter sailed a pitch over the left field fence, giving Toronto their second World Series win in as many years.

“Everyone knows how the ’93 World Series ended,” Carter said in an interview with Daily Hive from his home in Kansas City. “To be a part of that is a tremendous, tremendous thing that happened and I’m very proud of it.”

DraftKings set retroactive odds at +1800 (or 18-1) of Carter hitting the home run in that spot, while the odds of him simply getting a hit and tying up the game were +320.

“I had tears in my eyes because it was a moment that I didn’t believe happened,” Carter said.

As expected, everyone: media, his teammates, fans, coaches, wanted to hear from Carter on that October 23, 1993 night in Toronto.

But once the moment settled down a bit, Carter just wanted to soak it all in. At one point during the post-game celebrations, he decided to sneak into the team’s video room to get a peek at the replay for the first time.

“I said, I gotta go into the video room. I have to see this home run… the TV doesn’t lie about it, the video won’t lie,” Carter said.

But despite the millions of times it’s been replayed on the highlight reels over the years, Carter’s time with the Blue Jays almost ended after his first two seasons.

In 1992, Joe Carter had the chance to return to Toronto after winning the World Series, while also considering signing with the Kansas City Royals in free agency.

“It was some hard negotiations because [both teams] made some great offers to me,” Carter said.

A religious man, Carter was looking for a sign from above.

“As soon as I hear from the Lord, I will decide where I’m going,” he said.

One night, Carter had a dream where he was walking through the streets of Toronto, dribbling a basketball along with teammate Devon White.

When he woke up, he said there was 30-40 blue jays hanging out in his yard.

“I immediately called my agent,” Carter said, and the rest, well, is history.

Carter’s returning to Canada later this month for the Joe Carter Classic on June 29, an annual celebrity golf tournament that supports go towards supporting the education and development of Canadian youth.

“It’s great to come back there and play golf,” Carter said of this year’s tournament at Oakville’s Glen Abbey Golf Club. “We lift up a lot of spirits and see the excitement of the smile a lot of people’s faces.”

When it’s not golf, Carter said he’s often watching the MLB, NBA, or NFL in his free time.

“I’m a sports junkie,” Carter said, adding that he’s proud of Canadian Andrew Wiggins for winning this year’s NBA title with the Golden State Warriors. Carter said that he formed a friendship while he was playing at Kansas University before becoming the first overall pick in the 2014 NBA draft.

And of course, he’s been keeping his tabs on Toronto, where four Blue Jays are currently leading their respective positions when it comes to the All-Star balloting race.

“I love watching Vlad [Guerrero Jr.], I love watching Bo Bichette. I mean those guys, to me they epitomize what it’s like to be a ballplayer and the way that I played the game, they have fun,” Carter said. “They’re out there, and whether Vlad is having a bad game or a good game, he’s always smiling, always laughing and he’s been a big cheerleader to his teammates.”

But like many former players, Carter does wonder about how MLB has changed since he retired in 1998.

“It’s funny because when when we were playing, the old guys played before us they say that the game has changed,” Carter said. “And now I’m being one of the older guys and I look at the game now the game has totally changed.”

League-wide batting average is currently sitting at .242, the lowest it’s been since 1967 and the fifth-lowest season of all-time. The top 15 seasons in terms of strikeouts have all come in the last 15 seasons, while the top four home running hitting seasons league-wide have come in 2017, 2019, 2020, and 2021.

And despite being best-known for one of the game’s most iconic home runs, Carter said he thinks the batting mindset from current players of solely swinging for the fences is “taking away from the game.”

“I’m sure that these guys minds,  they’re all memory overload because they have no more memory left to to get any more intel,” Carter said. “I think when you go to the plate. They have so much to think about that you forget about the basics.”