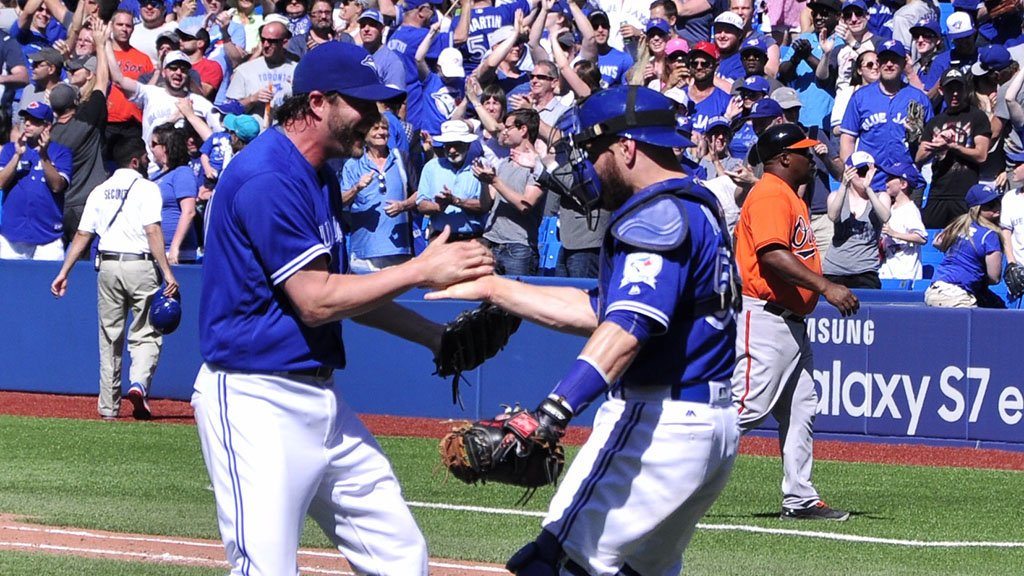 Known for his fist pumps and expletive-laden celebrations, Toronto Blue Jays right-handed reliever Jason Grilli had his 2017 option picked-up. The 39-year-old will be paid $3 million for the season.

Grilli was acquired on May 31 from the Atlanta Braves, where he had been struggling, for Canadian Class-A pitching prospect Sean Ratcliffe. He got off to inauspicious start, throwing the ball into the outfield in his first appearance with the Jays, but quickly settled in to become a fan favourite.

Known as ‘Grilled Cheese’, (a nickname based on his name and boasted fondness for the sandwiches), Grilli endeared himself to Jays fans with his exuberant mound celebrations and excitement during games. During the stretch run and playoffs, Grilli could be seen in the bullpen urging the crowd in the outfield seats to get loud. And nobody celebrated Jays homeruns as passionately.

I can't get enough of @GrillCheese49's emotion & intensity. We should all do what we love with such passion and excitement.

The hard-throwing right-hander ended up ringing 81 strikeouts in 59 innings pitched, becoming the eight inning set-up man to closer Roberto Osuna. Grilli also earned a couple of saves when Osuna was unavailable to pitch the ninth.

His unexpected success with the Jays was one of the highlights of the 2016 season, and was the culmination of his childhood dream. His father Steve was also a big-league pitcher, and spent the last four years of his career in the Jays organization, primarily with the Syracuse Chiefs, which was then the triple-A affiliate.

Grilli would watch Jays games with his dad and fantasized about one day playing for the team. He and his father are one of only two father/son duos to play for the Blue Jays (the other being John Mayberry and his son).

Another Grilli family fun fact? His cousin is actor and comedian Ken Marino.

At the end of the season, general manager Ross Atkins had called Grilli’s option “as near to a no-brainer to pick up as you can get.”

For the cost and low-risk, and potential high return on investment, the contract could once again prove to be a steal for the Jays.

And while some Twitter naysayers will point to a handful of blown innings as reason to let Grilli go, he was in fact a pivotal member of the bullpen rotation, particularly down the stretch run and in the post-season.

Grilli also provided a steadiness, maturity and work ethic that impressed upon the younger relievers in the pitching staff.

Should he stay healthy, Grilli will likely play an important role in the bullpen in 2017, but whether it will be as set-up man depends on the off-season moves Shapiro and Atkins make to shore up the pitching staff.

But Jays fans can be happy to know they will enjoy another season of dynamite fist pumps from their favourite Grilled Cheese.