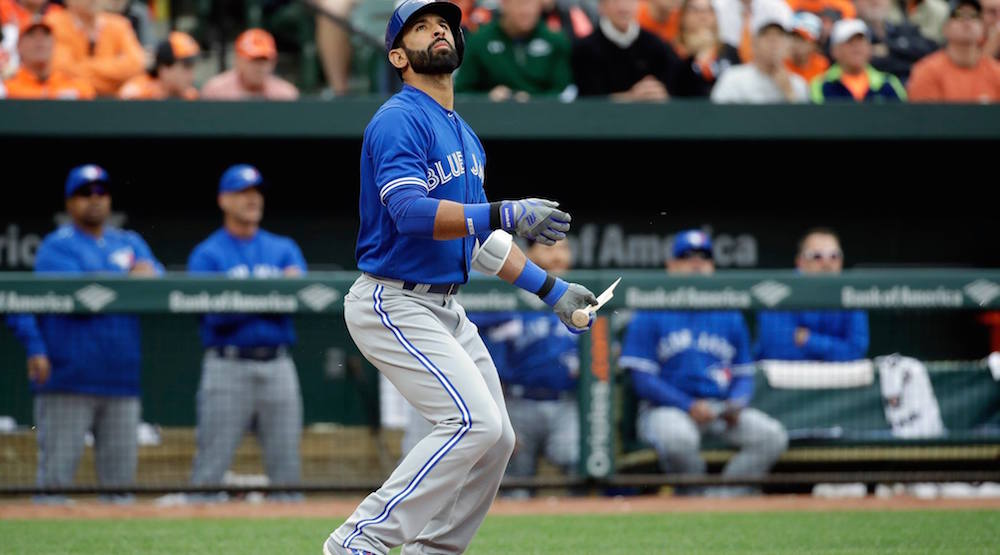 The Toronto Blue Jays are off to a franchise-worst 1-8 record to start the season. As a team, they’re hitting a paltry .190 and have hit a total of four home runs. It couldn’t get any worse for the Blue Jays, right? RIGHT?

The Baseball Gods haven’t been kind to the Blue Jays during their first two weeks of the 2017 campaign. Not only have the Jays lost all but one of their games thus far, they’ve generated little-to-no offence as of late.

And now one of the club’s sole run contributors? His status may now be in jeopardy. Josh Donaldson hobbled into second base during Thursday night’s 2-1 loss to the Baltimore Orioles after aggravating his right calf.

Donaldson suffered a calf injury early in Spring Training and the club eased him into action as a precaution to avoid worsening his status. All appeared to be fine with Donaldson during Opening Week, but his calf injury resurfaced just prior to returning to Toronto this week.

Judging by the way he limped off the field and immediately left Thursday night’s game, Donaldson may not be back any time soon. As if things weren’t bad enough for the Blue Jays already, now the club may be without him for an undetermined length of time.

It’s just been one thing after another for the Blue Jays this season. Thursday’s 2-1 loss was a microcosm for everything that’s gone wrong for the team thus far; a solid starting pitching performance squandered, little-to-no-offence from the starting lineup, and an injury to a star player to add insult to injury.

Not only that, but Troy Tulowitzki nearly took a baseball to the face after Devon Travis innocently threw the ball to Tulo while he wasn’t even looking. The ball hit Tulowitzki on the hand as he went to cover his face, but the results from that freak play could’ve been much worse.

What else? What else could bad for the Blue Jays? The only thing that’s gone right has been their starting pitching, and for the most part the Jays’ bullpen hasn’t been a dumpster fire. But the offence has been all-but-absent through the first nine games of 2017.

The Blue Jays are hitting an MLB-worst .143 with runners in scoring position. They’ve stranded countless base runners, but the most concerning part is the Jays aren’t showing many signs of turning the corner.

Right-handed pitching has been the Blue Jays’ weakness thus far, and with a right-handed dominant lineup, at times the Blue Jays are a very easy team to pick apart. Teams just use the same approach on one hitter, duplicate that game plan for almost every other Blue Jays hitter and it subsequently shuts down the Jays’ offence.

By no means is the season “over” for the Jays. Right now, it may feel like they’ll finish the 2017 season with a 1-161 record, but the Blue Jays will eventually win another game.

Every team is susceptible to hardships throughout the season. Even World Series Champions have bad stretches during the regular season. The reason why the Blue Jays’ struggles are amplified this year is because they’re expected to compete in 2017.

Were this a 1-8 run in May or June, there may not be as much attention paid towards a nine-game stretch for the Blue Jays. But after two consecutive playoff berths and two trips to the ALCS, there’s an expectation this year for the Blue Jays to build upon the success of 2015 and 2016.

That’s incredibly difficult to do when your team is already seven games under .500 during the second week of the regular season.

There’s still 94.5% of the schedule left to play – that’s 153 more chances for the Blue Jays to right the ship and turn the season around. This team is far too talented to let this slump continue. The hitters in the Blue Jays lineup have performed at elite levels before.

But until the Blue Jays win again and until they start winning consistently, it’s going to feel like this team is in the midst of a tailspin… and it’s only April.