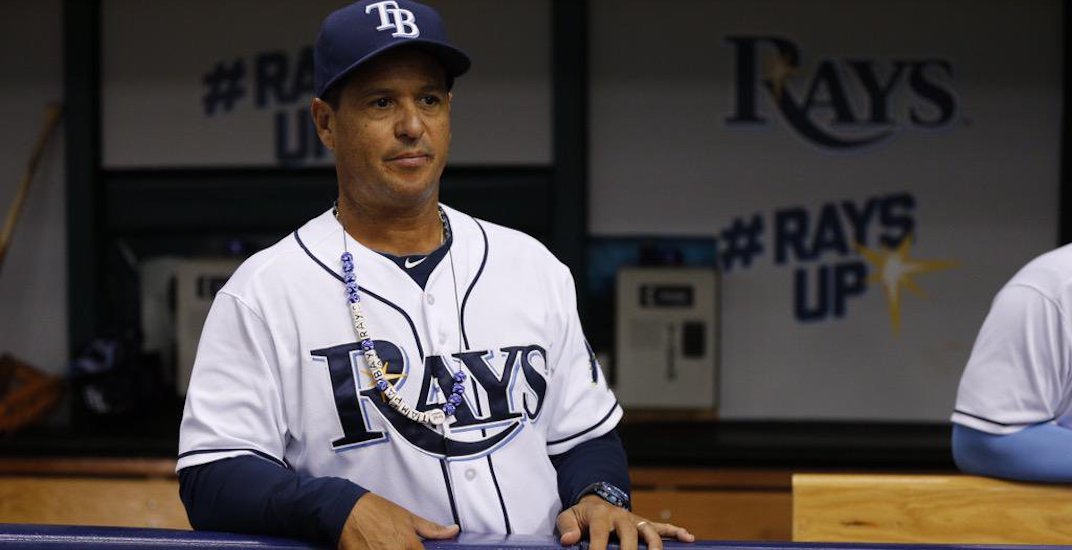 The Toronto Blue Jays have found their replacement for John Gibbons.

Charlie Montoyo has been announced as the 13th manager in Blue Jays history, with the team signing him to a three-year contract through 2021, with a club option for the 2022 season.

Montoyo will take over from Gibbons, who managed the team since 2013 and parted ways with the club at the end of the season.

This is the first big league manager role for the 53-year-old Montoyo, who has been a coach with the Tampa Bay Rays since 2015. Montoyo has certainly paid his dues, managing minor league teams for 18 years before becoming the Rays’ third-base coach in 2015. He was promoted to bench coach last season.

“I am extremely honoured and humbled to join the Toronto Blue Jays organization and I would like to thank Mark and Ross for this amazing opportunity,” said Montoyo. “Managing a team that represents an entire nation is incredibly special. My family and I look forward to working towards the ultimate goal of winning a championship for this city. I also want to recognize the entire Tampa Bay Rays organization for giving me the chance to start my coaching career.”

This won’t be the first time Montoyo will call Canada home, as he split the 1993 season between the Montreal Expos and Triple-A Ottawa Lynx during his playing days. He also spent 10 years as an infielder with the Brewers, Expos, and Phillies organizations.

A native of Manati, Puerto Rico, Montoyo speaks both English and Spanish, which should help communication with a pair of Latin American prospects – Vladimir Guerrero Jr and Lourdes Gurriel Jr – who are expected to break into MLB soon.

Following his playing career, Montoyo joined the Rays’ organization in 1997 and has worked his way up since. He managed the Rays’ Triple-A team from 2007 to 2014, with great success. Montoyo was inducted into the International League Hall of Fame in 2016 after eight seasons managing the Triple-A Durham Bulls, compiling a 633-515 record, including seven division titles, six finals appearances, and two championships.

Montoyo was also a coach for Puerto Rico at the 2009 World Baseball Classic and interviewed with the Seattle Mariners to be their manager in 2015.

“We are thrilled to announce Charlie as the new Manager of the Toronto Blue Jays,” said Blue Jays manager Ross Atkins. “Charlie is a highly regarded leader by so many individuals in the game and we were thoroughly impressed by his experiences and approach as we learned more about him during the interview process.

“Charlie is passionate about the game, with a superior ability to connect and relate and we are confident he will have an overwhelmingly positive influence on Blue Jays players and staff. On a personal level, I am looking forward to working with him as we continue to build and sustain a championship organization.”

“Charlie possesses the warmth, authenticity, and extensive experience that will help foster a championship culture in our clubhouse and throughout the Blue Jays organization,” said president and CEO Mark Shapiro. “His collaborative nature and leadership ability will undoubtedly have a broad impact across the club.”

Montoyo will be officially introduced by the team at a media conference on Monday.