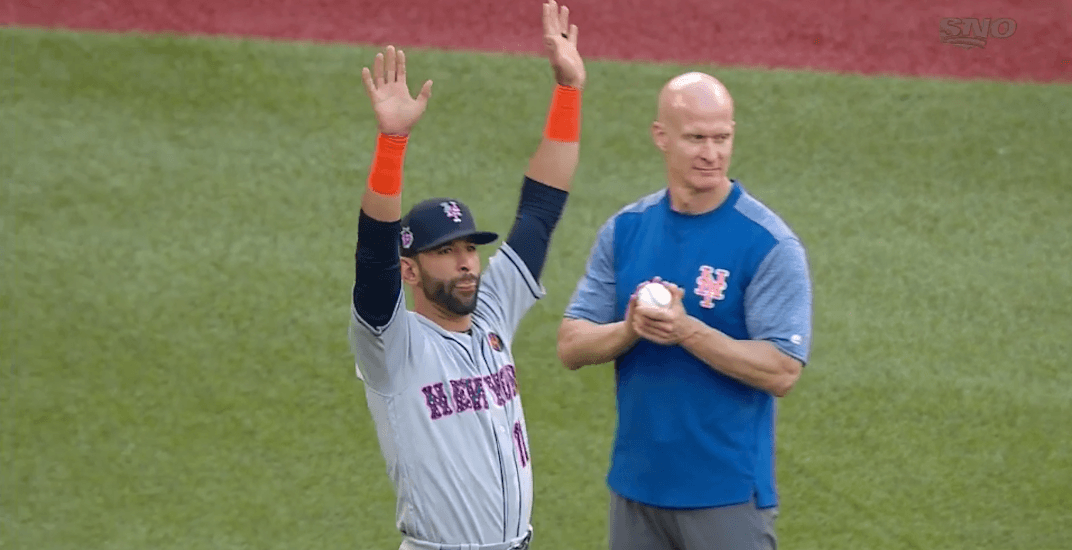 Jose Bautista made his much anticipated return to Rogers Centre on Tuesday, taking on the Blue Jays with his new team, the New York Mets.

After an unsuccessful 12-game stint with the Atlanta Braves earlier this year, Bautista appears to have found a home in New York. The 37-year-old has a .250 batting average, with three home runs, 13 RBIs, and a .418 on-base percentage in 36 games with the Mets.

Bautista, who ranks second all-time among Blue Jays in home runs, third in RBIs, second in runs, and fourth in OPS, was a fan favourite in Toronto for obvious reasons.

Add in the fact that his bat flip home run during the 2015 postseason is one of the most iconic moments in franchise history, and it should come as no surprise that he was greeted with a standing ovation during his first at bat.

Jose Bautista taps Russell Martin on the shin pads with his bat as he approaches the plate, tips his cap to #BlueJays dugout and then to Marco Estrada. Another loud ovation followed by the "Jose, Jose, Jose" song.

Before the game, the Blue Jays honoured the six-time All-Star with a special video tribute. He acknowledged the crowd and received a lengthy standing ovation at its completion.