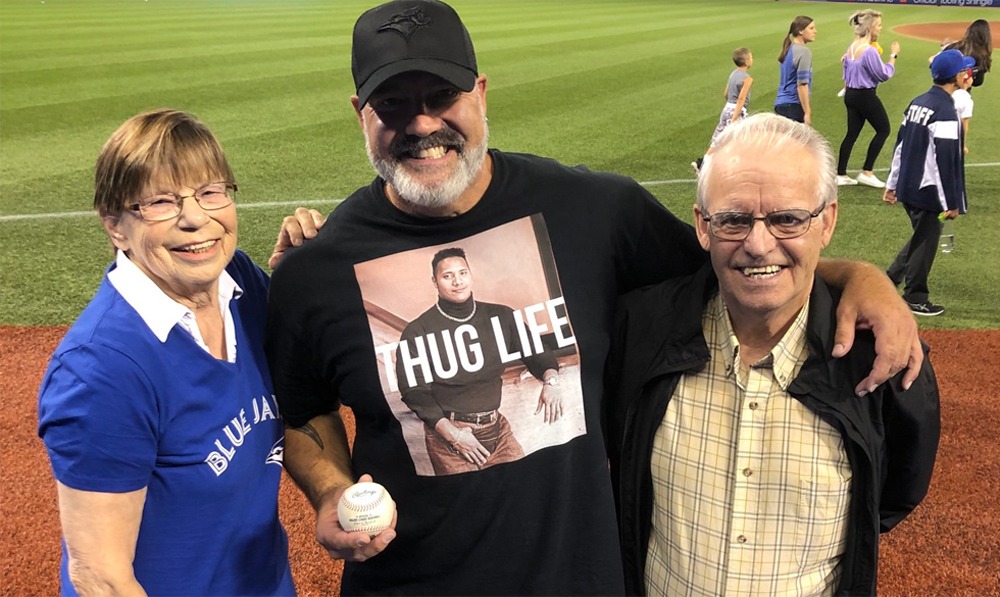 The man who made one of the best fan catches of the year still can’t believe what happened; both in the moment and the aftermath of his viral snag in the stands.

His interesting attire combined with his cat-like reflexes quickly garnered attention from titans like Dwayne “The Rock” Johnson to Sportsnet’s Tim & Sid program. A combination of Clarke’s softball skills and being in the right place at the right time was the magic formula for this unforgettable catch.

He never expected to show up on the highlight reel or make the rounds on social media that day, he was just happy to get his parents some decent seats to their very first baseball game at the Rogers Centre.

“This was the first time my parents were at the SkyDome to see the Jays,” Clarke said. “I jokingly said to my mom: ‘Watch, we are in foul ball territory, you have to pay attention.’ All of a sudden, (Yordan) Alvarez steps up to the plate, takes a cut, the ball comes over, and honest to God, it was like slow-motion.”

With his cell phone and a freshly cracked Bud Light clutched in his right hand, Clarke made the perfect catch with his left hand. Since the ball was slicing into their section, he also saved his 75-year-old mother from potential injury.

“It was just instinct. I just reacted, made the catch,” Clarke said. “It was after I caught the ball, going: ‘Holy shit, I caught the ball.’ And then that’s when I started thinking I’m glad I did catch it, because my mom was right there. It would’ve smoked her.”

It wasn’t long before the Blue Jays social media team posted the catch. With Clarke sporting a “Thug Life” shirt featuring The Rock, the People’s Champ chimed in on Twitter. That’s when Clarke knew things really started to blow up.

Johnson followed up his original kudos to Clarke with a second tweet, commending him for making the catch and shielding his mother.

The catch was serendipitous, as Clarke estimates he’s been to about 25 Blue Jays games over his lifetime and never had the opportunity to make a catch like this. Earlier this year, he sat in the second row for a contest against the Yankees, but had no luck snagging a souvenir baseball.

One of the most impressive aspects of this play was the fact that Clarke never took his eye off the ball and he kept a freshly cracked beer intact. “Everyone keeps telling me: ‘And you never spilled a drop’, I’m like: ‘Not at 15 bucks a can, I’m not.'”

Like any good son, Clarke gave the ball to his mother as a memento of her very first game at Rogers Centre, where she witnessed history in the form of a Verlander no-hitter. She also saw her son make an impressive catch their family won’t soon forget.

“I gave it to my mom as a souvenir,” Clarke said. “I plan on getting a case for it. I’m going to get a nice little plaque or something and maybe a picture of the three of us holding the ball. This was big for them. This was a huge highlight for them.”

For the time being, Clarke is soaking it all in, still in disbelief that he caught the ball in the first place, but also how footage of the catch has taken off on social media. Given how often people misplay foul balls in the stands, this sure-handed fan was elated to make the play.

“I’m just grateful it turned out the way it did. It’s like hitting a hole in one. When it’s long and forgotten, I will never forget this, nor will my parents.”