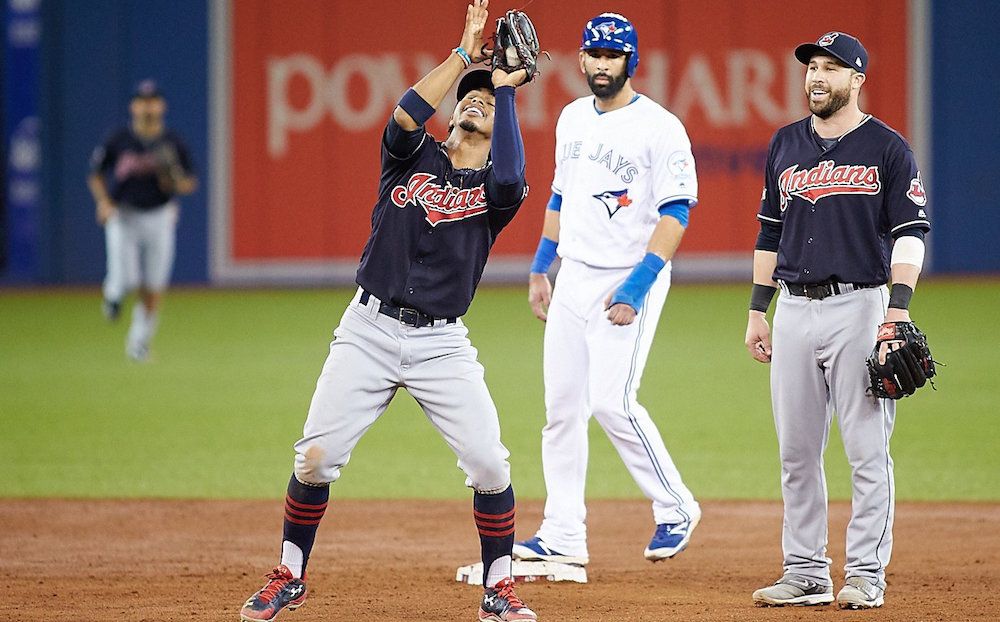 The Toronto Blue Jays are on the brink of elimination in the ALCS, down 3-0 to Cleveland in their best-of-seven series. Cleveland can punch their ticket to the World Series as early as Tuesday afternoon.

The odds are stacked against the Blue Jays, who will need to become the second team in the history of Major League Baseball to overcome a 3-0 series deficit if they want to advance to the World Series.

In the history of best-of-7 series, teams going up 3-0 are 34-1. The only one that blew it did so against a Terry Francona club. #Indians

Cleveland got off to a great start in the top of the first inning. Carlos Santana got a leadoff walk, which set the table for Mike Napoli, who hit a ball that deflected off Jose Bautista for a double. That scored Santana and the Indians were off and running.

The story of the series had been dominant pitching from Cleveland, and it looked like the Jays would get a break in the bottom half of the first inning when starter Trevor Bauer was forced to leave the game. It turns out you’re not allowed to bleed profusely all over the place in a baseball game, who knew?

Trevor Bauer forced to leave the game after his right pinky's stitches opened back up. #Indians #BlueJays pic.twitter.com/HWB2k1e6Bx

Maybe they should have been. Bauer had walked two batters, and certainly wasn’t playing at 100%.

With a runner on first and second, once again Toronto couldn’t get the timely hit they needed early in the game, and reliever Dan Otero got out of the inning.

Jays fans had to wait until Game 3, but they finally got a home run from their power-hitting squad in the bottom of the second inning. It came in the form of Victoria’s Michael Saunders, Who hit a ball out to tie the game at one.

Napoli was excellent for Cleveland on this night, getting a run right back in the fourth inning, leading off with a home run.

The homer put him into an interesting club – one that includes former Blue Jays first baseman John Olerud – as he became just the fifth player to hit a postseason home run with four different teams.

Players to HR with 4 teams in postseason

Cleveland has been the better team at manufacturing runs in this series, using their incredible speed to their advantage.

In the fifth inning, the Jays gave them a taste of their own medicine.

Ezequiel led-off the inning with a ball that went all the way to the wall. Instead of settling for a double, Carrera ran hard immediately, and stretched his hit into a triple when the ball died on the wall.

Next up was Ryan Goins, who put the ball in play and scored Carrera to tie the game at two.

Once again, Cleveland answered back immediately.

This time it was a solo home run from Jason Kipnis in the sixth inning. Until that point, Cleveland batters were 0-15, with the exception of Napoli (2-2).

Two batters later, Napoli went to work again. Stroman walked him, which marked the end of his day on the mound. Then, with Biagini pitching, some heads up base running resulted in Napoli taking second base on a wild pitch, then scoring off a bloop single by Jose Ramirez to make the score 4-2.

when mike napoli stealing bases its over

The Jays had their best chance to tie the game in the seventh inning.

Carrera made good contact, popping out on a deep fly ball. Justin Smoak pitch-hit for Goins and got to a full count before striking out. During that at-bat, Pillar stole second base, barely.

After Jose Bautista walked, Josh Donaldson had his chance. With two outs, he nearly got one to drop, but Coco Crisp made a great catch – barely – in left field.

Threat over. And with Andrew Miller still to come in the game: game over.

Toronto and Cleveland will play Game 4 on Tuesday at 1 pm PT / 4 pm ET.