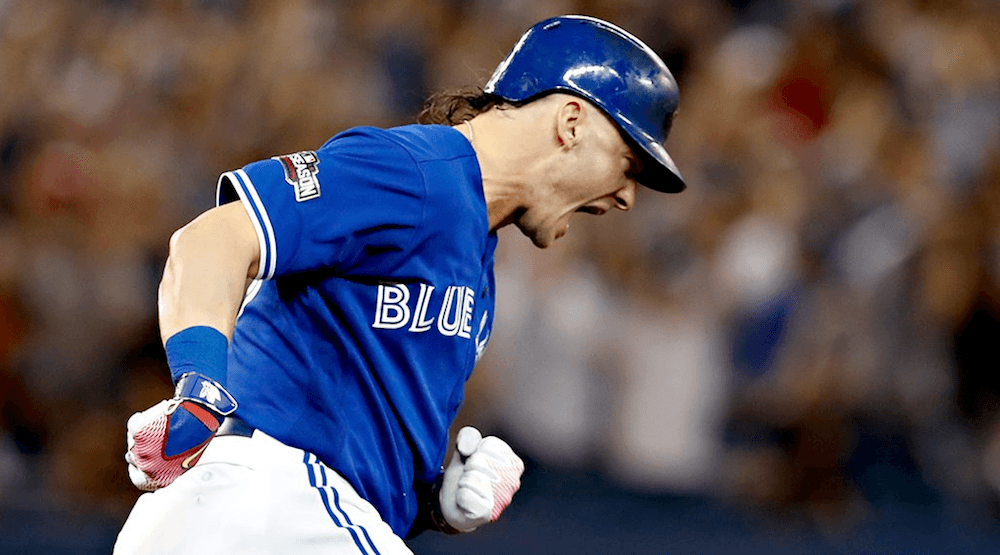 The Toronto Blue Jays are still alive, after beating Cleveland 5-1 in Game 4 of their best-of-seven series.

The Blue Jays are 25% of the way to completing just the second 3-0 series comeback in MLB history. In other words, they’ve still got an enormous task in front of them.

But you have to win one game before you can win four, and the Jays have a lot to feel good about heading into Game 5.

Cleveland knocks on the door first

Cleveland threatened to score first in the third inning, getting a leadoff double from Tyler Naquin. After a sacrifice bunt moved Naquin to third with just one out, it looked like the Tribe’s small-ball tactics would go in cruise control.

Instead, Jays starter Aaron Sanchez went to work, getting the next two batters to ground-out. Inning over.

Blue Jays get a lead, finally

The Blue Jays finally got their first lead of the game in the bottom half of the third inning.

With two outs, Josh Donaldson hit his first home run of the series, and just the second by a Jays hitter against Cleveland.

Donaldson was visibly fired up, something to be expected after the frustration for Toronto in the first three games.

The Blue Jays extended their lead in the fourth inning, this time with some small ball.

A pair of walks to Troy Tulowitzki and Russell Martin put a runner in scoring position with no outs.

Michael Saunders struck-out, setting the stage for the underrated Ezequiel Carrera, who hit a bloop single.

The base hit by Ezequiel Carrera had a hang time of 4.8 seconds and Naquin was 100ft away. That was caught 58% of the time this year

It initially looked like a catchable ball, but Tulowitzki read it well and scored on the play to double the Jays’ lead.

Cleveland gets one back

Cleveland got on the board in the fifth inning in the most Cleveland kind of way.

Coco Crisp led-off the inning with a walk and advanced to second on a wild pitch. Cue Roberto Perez, who hit a ball off the wall for a double.

The wild pitch loomed large, as Crisp may not have scored from first.

Sanchez does his job

The Blue Jays’ ace was magnificent in this one.

Pitching on eight days rest didn’t seem to bother Sanchez, who gave up just two hits through six innings, with two walks and only one earned run.

By mode of comparison, Cleveland’s starter Corey Kluber pitched on just three days rest for the first time his career.

Kluber wasn’t lights-out-good like he was in Game 1, but he was still very effective.

Despite the 3-0 series advantage, the margin of victory has been razor thin in the ALCS.

That changed in the seventh inning.

Toronto started a rally from an unlikely contributor.

Ryan Goins, the ninth batter in Toronto’s lineup, began the inning with a single off Cleveland reliever Bryan Shaw. Jose Bautista followed that up with a slow grounder that Shaw airmailed to first, advancing Goins to third.

Loading the base for Edwin Encarnacion is a dangerous recipe to live by.

An intentional walk to Donaldson loaded the bases for Edwin Encarnacion, who singled in two runs, giving the Blue Jays some breathing room up 4-1. The three-run advantage was the first time in the series that either team extended a lead beyond two runs.

The Jays got some more contributions from the bottom of their lineup to start the eighth inning. Carrera hit a ball to the wall for a stand-up triple with one out. Kevin Pillar brought him home on a sacrifice fly, after a highlight reel catch by Cleveland outfielder Brandon Guyer. That gave the Jays a 5-1 lead.

From there it was Roberto Osuna time in the ninth, getting three quick outs to seal a 5-1 victory for the Blue Jays.