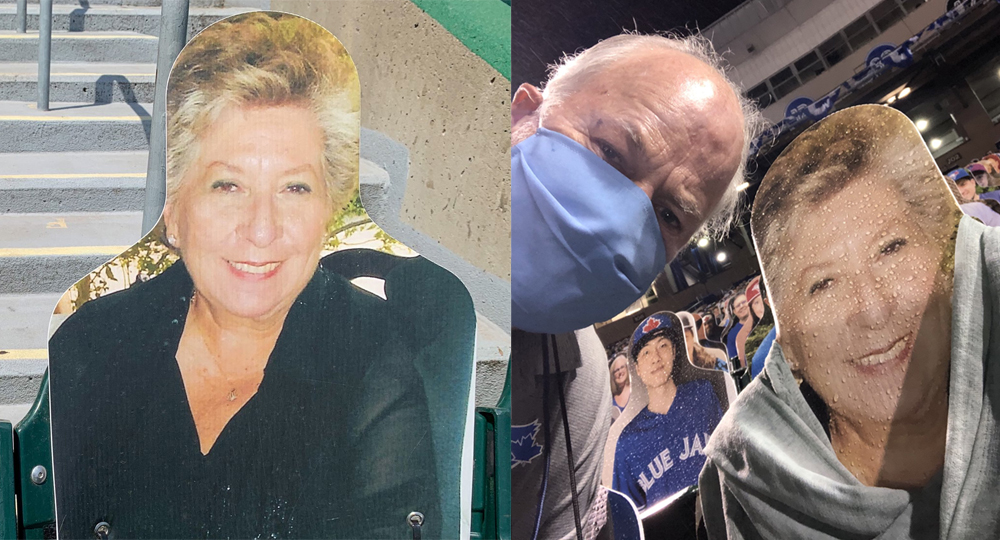 The Blue Jays are paying homage to the “Home Plate Lady” by switching out one of her signature items — her scarf — every home game in Buffalo.

Home plate lady remembered to be scared this time 😂 pic.twitter.com/cbwYQ1jQex

Michelle Seniuk is the Director of Marketing Promotions and Events with the Blue Jays, and she explained how they’re having a little fun at Sahlen Field by paying homage to one of their most visible and loyal fans.

“The Home Plate Lady cutout has really taken on a life of her own with Blue Jays fans on social media,” Seniuk told Daily Hive. “We heard our fans loud and clear when they pointed out that she had an obstructed view, so made sure we quickly moved her while adding a cutout of her daughter in the seat next to her.

“That evolved into how to best represent our fan-favourite fan — how would Home Plate Lady really look, dress, and act if she was at Rogers Centre or Sahlen Field?

“Much of the credit goes to our teammate, Jeff Holloway (also is responsible for the crowd noise you hear during the game), who took it upon himself to make sure Home Plate Lady had everything she needed during the game.

“From popcorn to her ever-changing scarves — making sure Home Plate Lady is game ready is now part of Jeff’s game day duties.”

Besides changing out the scarves behind home plate every home game, Holloway set up this puzzling cardboard cutout display sequence that stumped Blue Jays fans for days.

Hey @thehazelmae and @ryan_borucki, do you know what this is? 🤣

Thanks everyone for playing! pic.twitter.com/SkFFEtZ2Ep

The Blue Jays don’t spare any details for their home games in Buffalo, so let’s go through the many wardrobe changes thus far for “Home Plate Lady”. 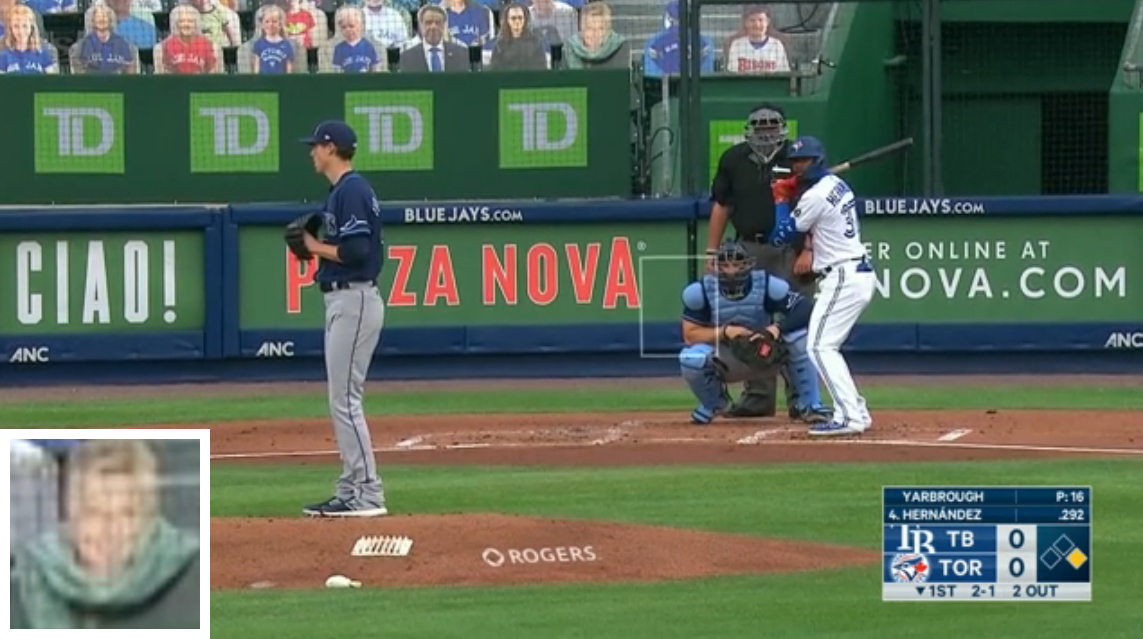 The trend started on August 15, the fourth home game of the regular season for the Blue Jays in Buffalo. Home Plate Lady started off with a green scarf draped around her signature cardboard cutout. 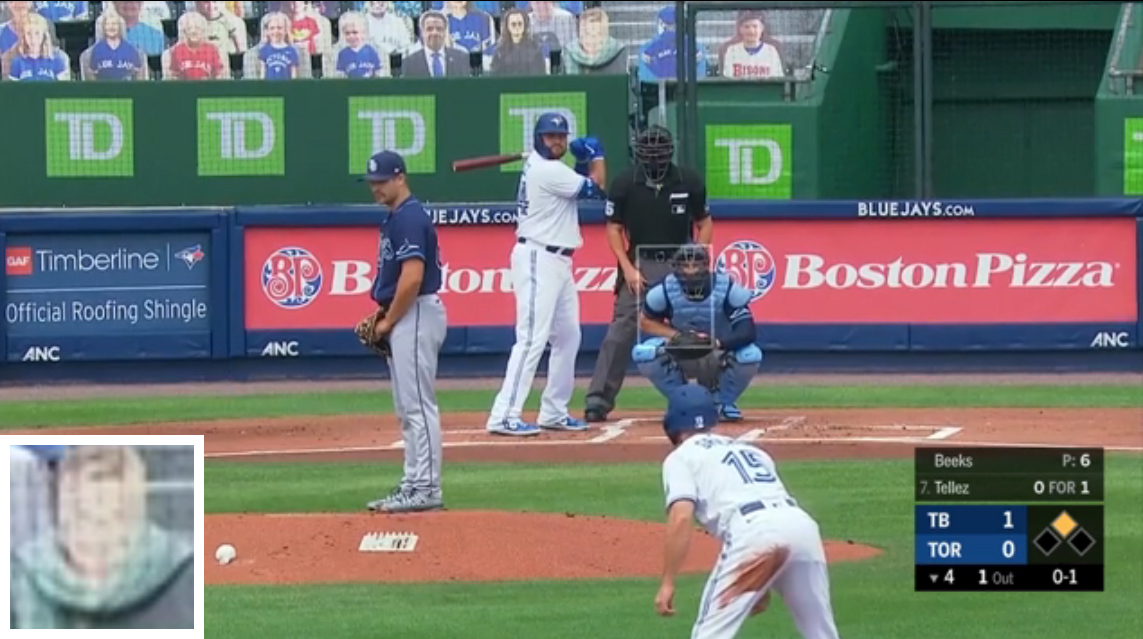 The very next day, the Blue Jays played a doubleheader against the Tampa Bay Rays. And how’s this for consistency … since the first game of the day was a makeup of the previous game, she had the same green scarf as the previous day.

Then during the Sunday doubleheader, the Blue Jays opted for a coral scarf for their matriarch. Two scarves in two one day; now that’s commitment to the bit. 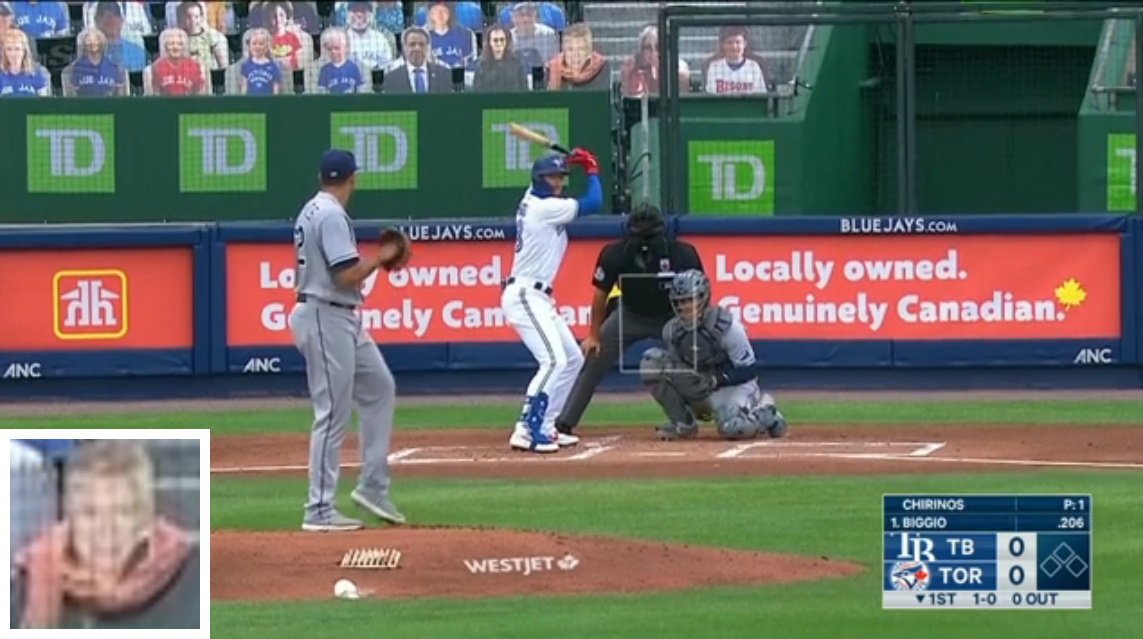 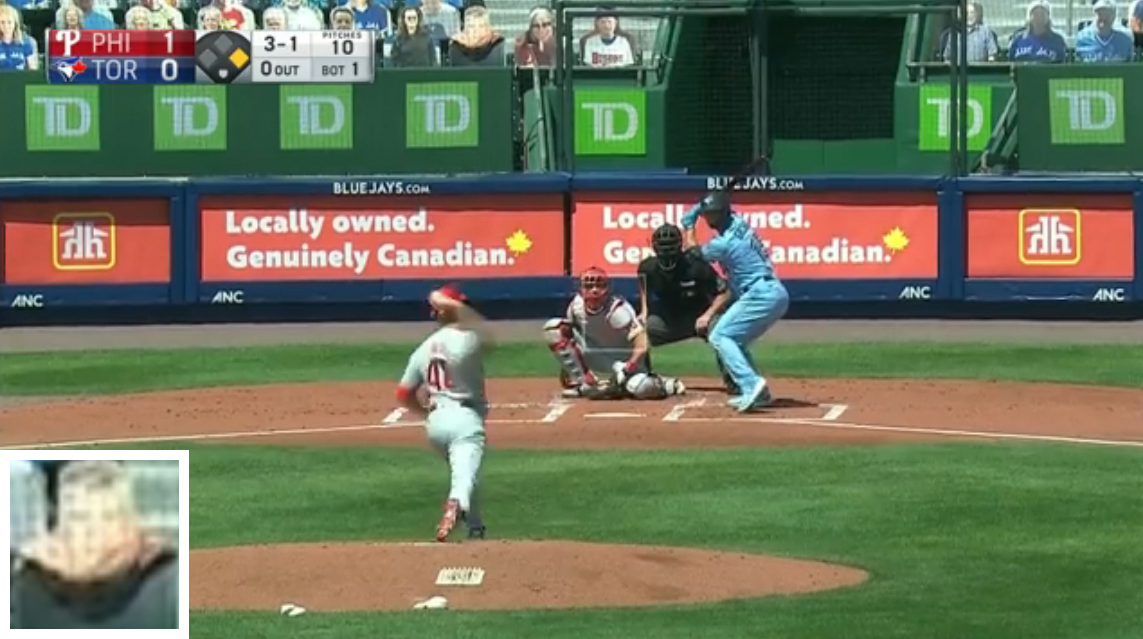 From there, the Blue Jays had a brief three-game road trip to Baltimore before returning home for another double header on August 20, this time against the Philadelphia Phillies.

And Home Plate Lady brought back the classic coral for both games of the double dip. 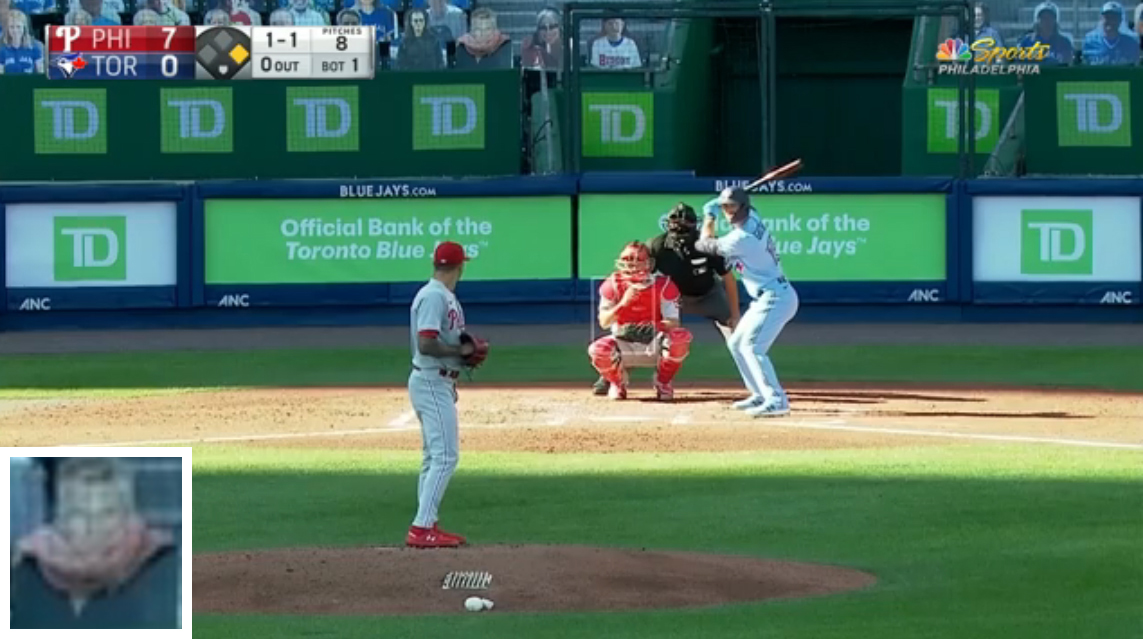 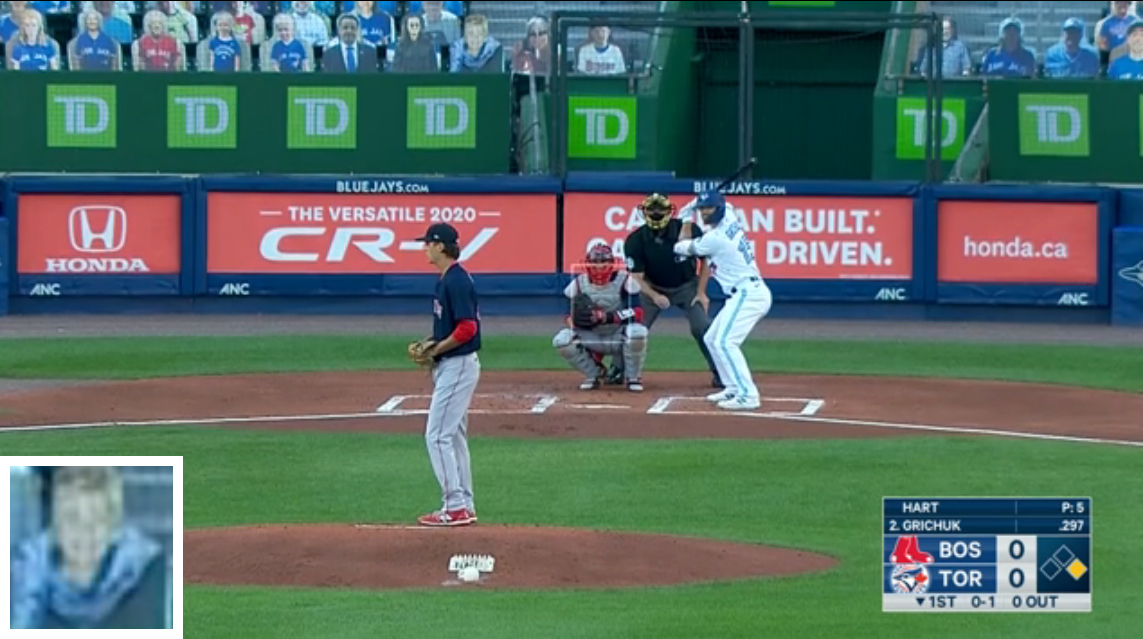 On August 25, we have the first real deviation in the pattern of scarves. To start this home stand, the Home Plate Lady wore her first piece of official team swag; a Blue Jays scarf. 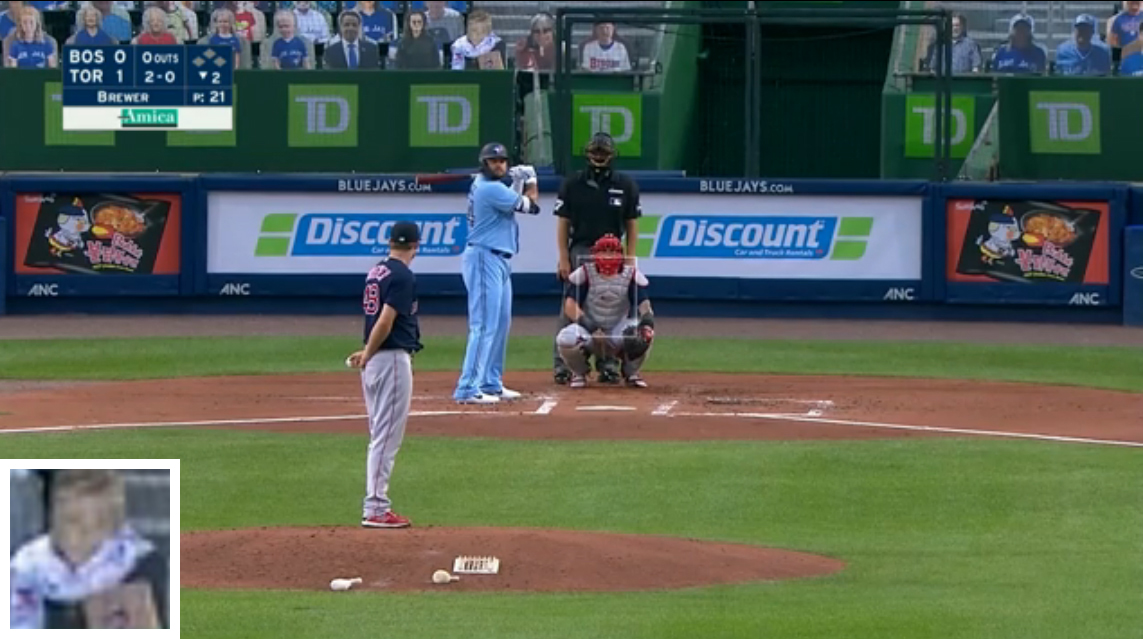 Here’s where the Home Plate Lady cardboard cutout takes on a personality. She’s wearing the same Blue Jays scarf as before, but this time, she’s enjoying a bag of the Blue Jays signature popcorn.

Wanted to make sure Home Plate Lady was doing OK after rainout with thunder and lightning and flooded dugouts. But apparently nothing can make her flinch. #bluejays #warriorwoman #letsplay2 pic.twitter.com/4hnB8Gh5uK

Later in the game, torrential rain poured down, so one fortunate soul was kind enough to provide some refuge for Home Plate Lady with her very own umbrella. 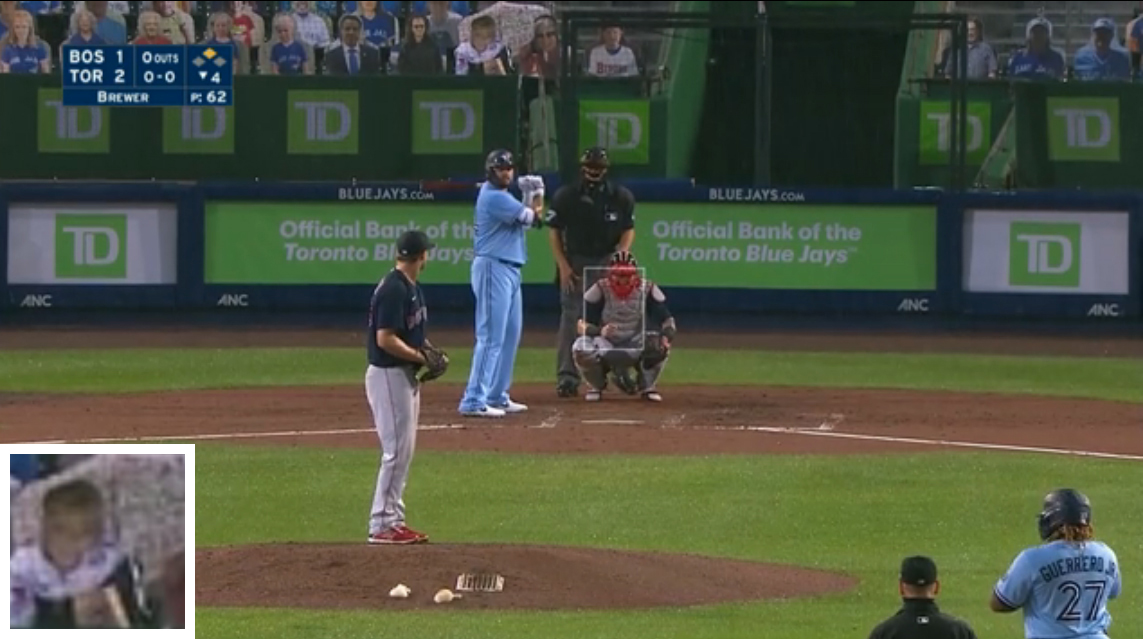 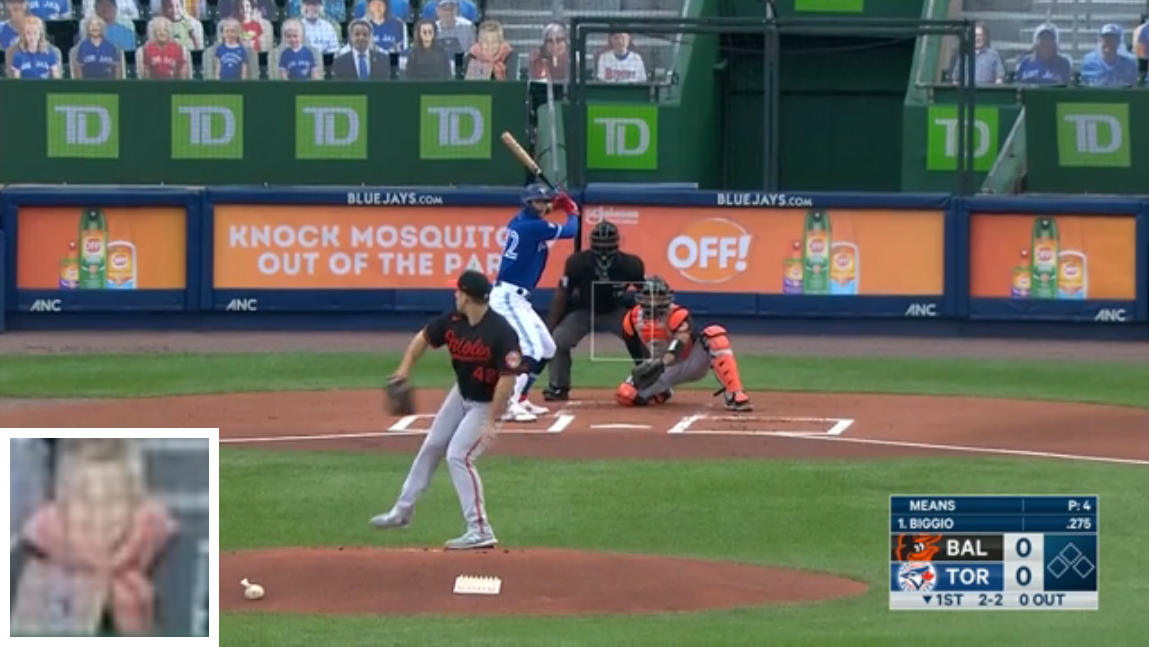 We can only assume the pink scarf is high in the rotation of Home Plate Lady’s favourite scarves. She’s now worn this number five times, except this go around, she’s still making her way through that bag of popcorn. 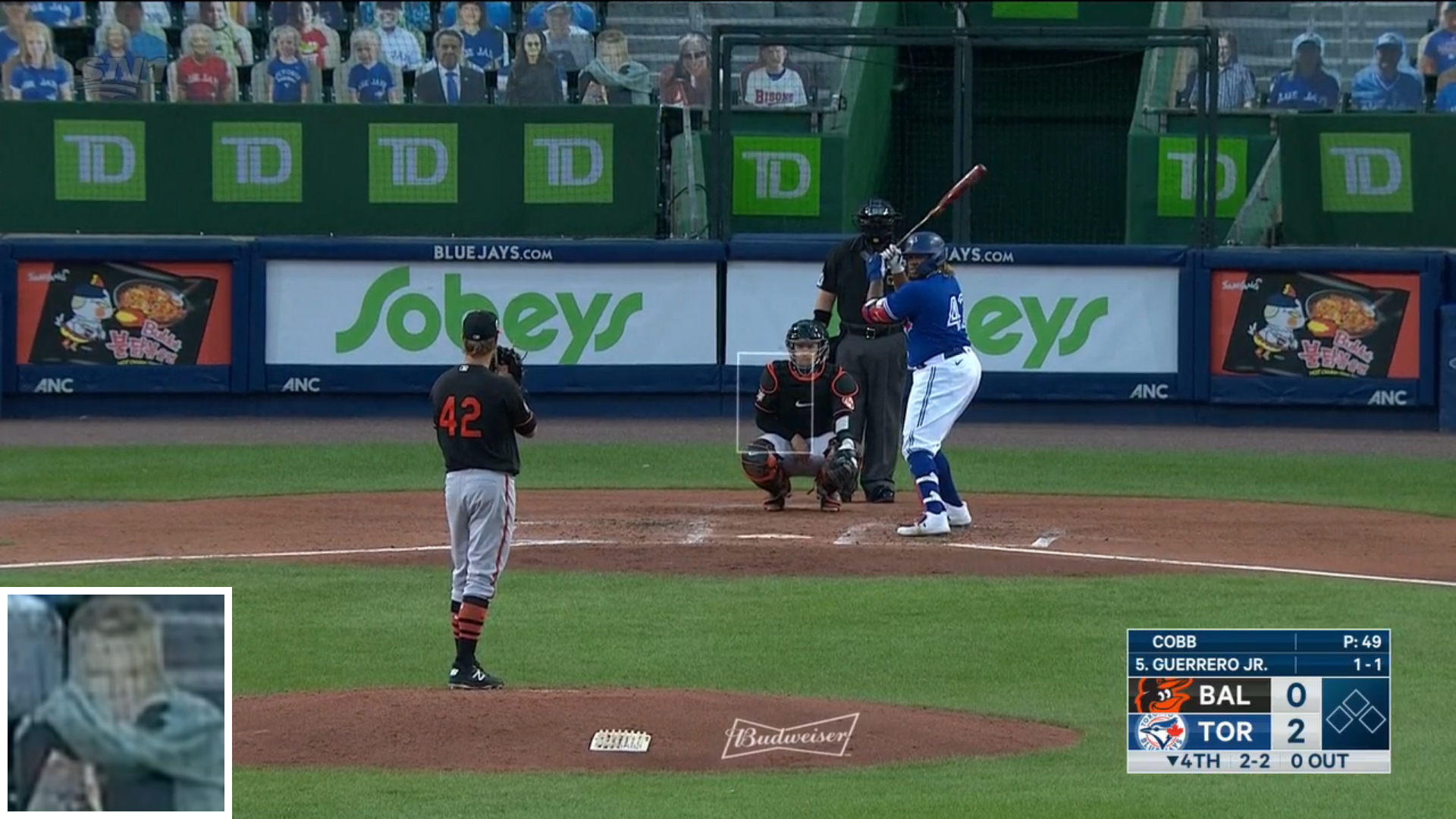 By the thirteenth home game of the 2020 season, we’ve established a bit of a pattern with Home Plate Lady’s scarves. The tried-and-true original green scarf gets its first accompanying accessory with the bottomless popcorn bag. 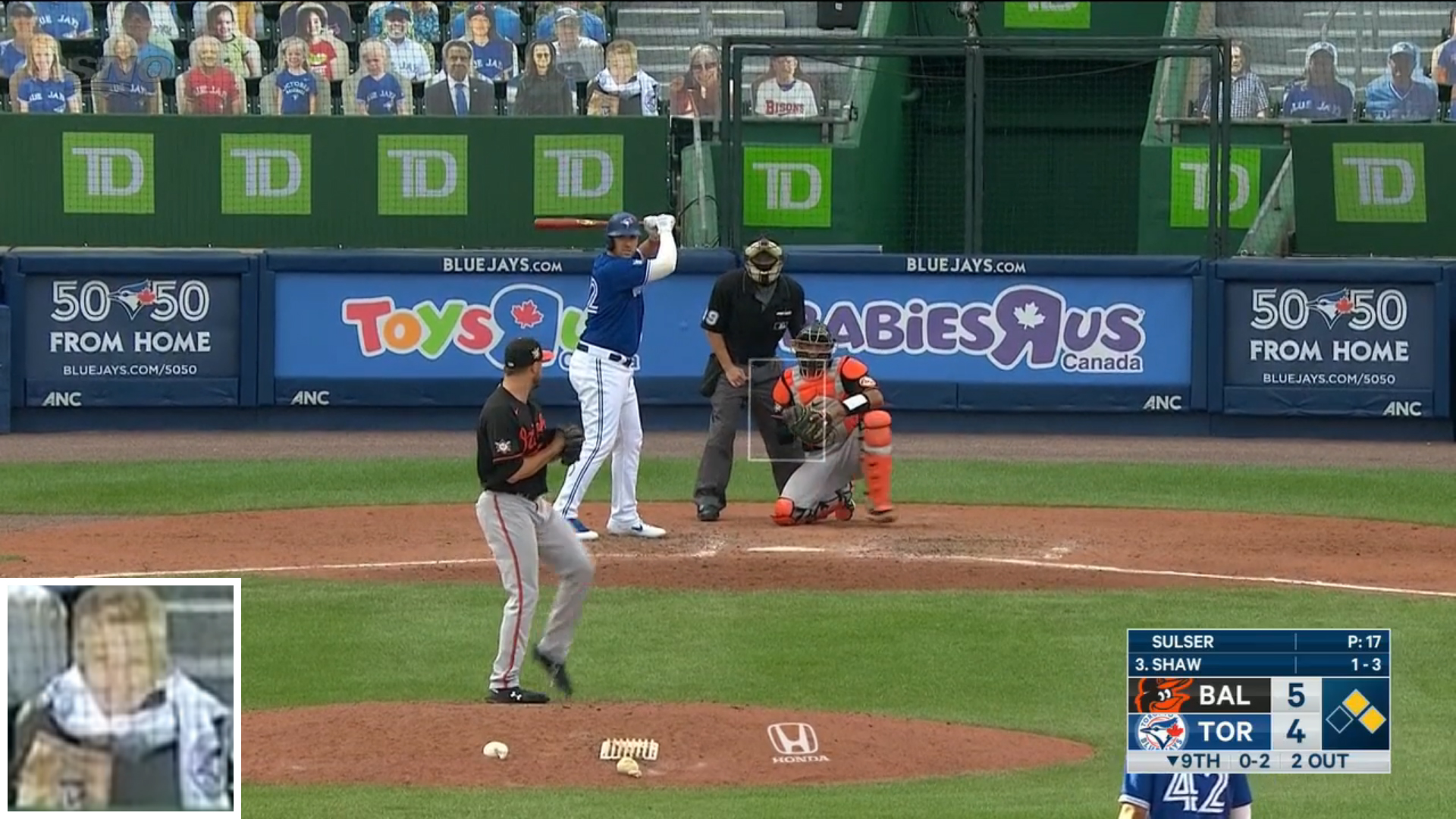 Here, the Blue Jays scarf makes its second appearance during the second-last home game of August at Sahlen Field. 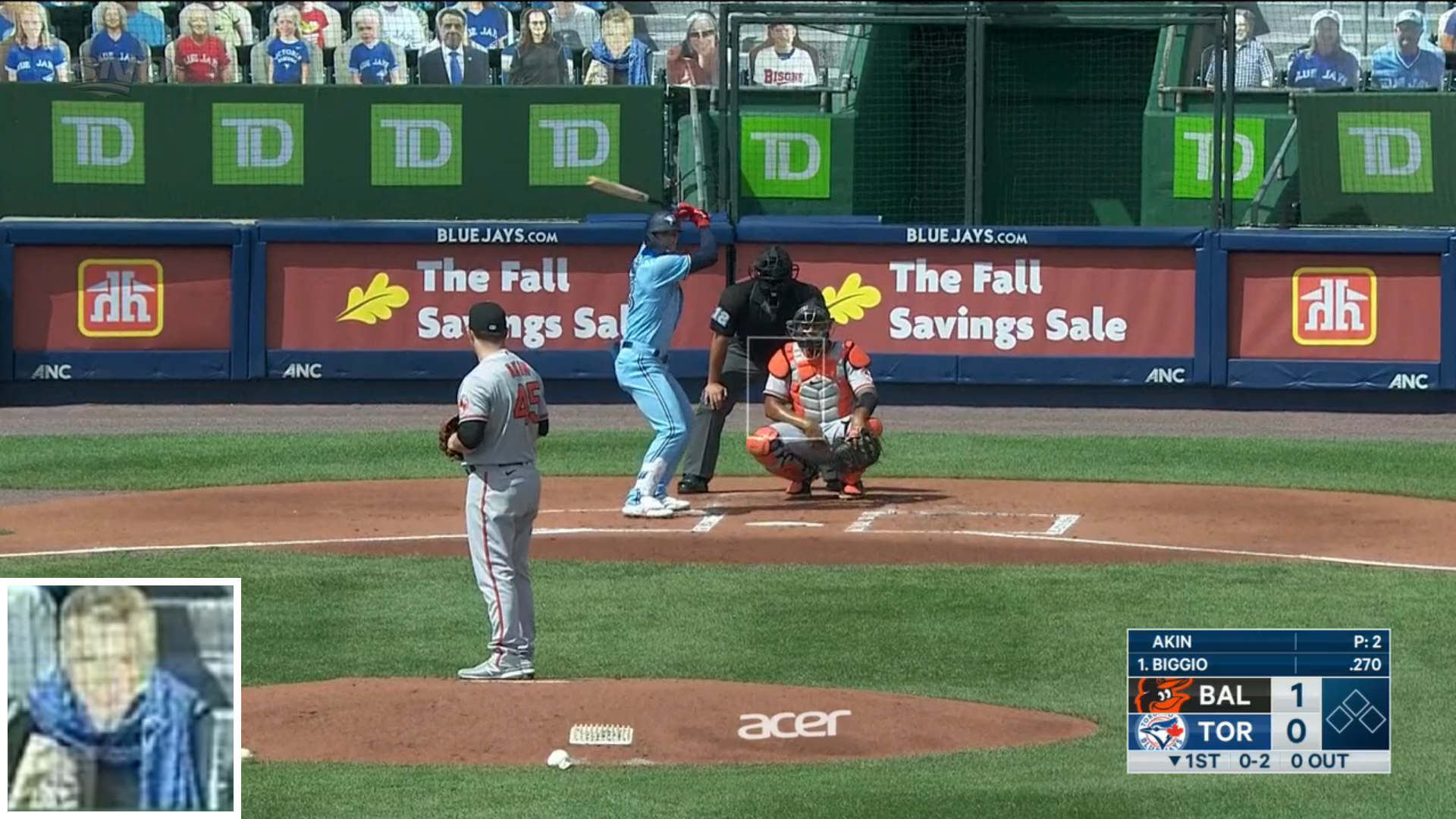 Last but not least, Home Plate Lady completed the latest home stand with this blue and white scarf, while the popcorn bag looks like it’s seen better days.

An interesting note: since the Blue Jays started putting scarves around their most visible fan behind home plate, the team owns a 6-4 record, which is good for a .600 winning percentage. So they have to keep doing this for the rest of the season, right?