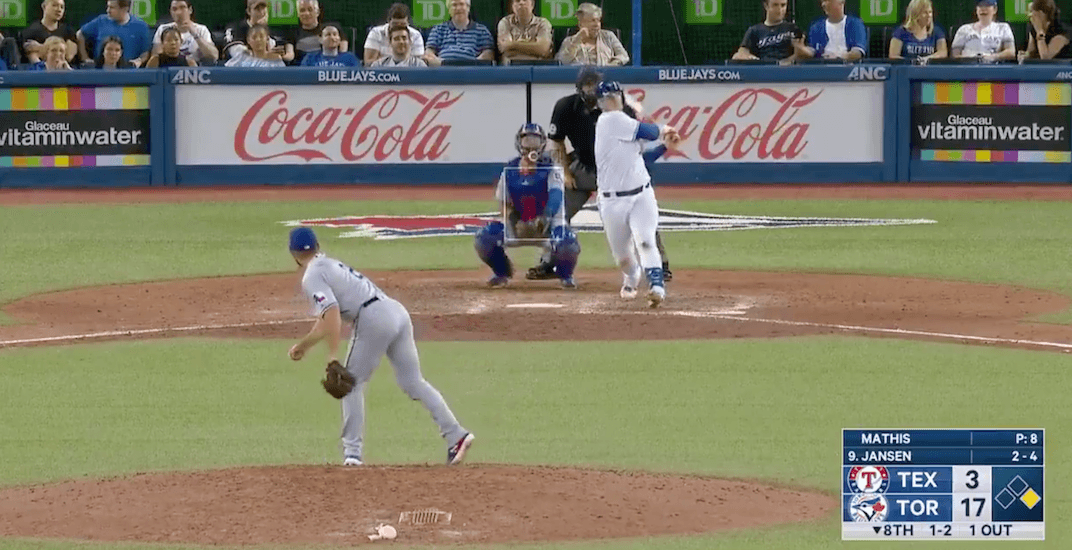 20 years and two days ago, the Toronto Blue Jays defeated the Texas Rangers 19-4. On Monday night, almost two decades to the day, the Blue Jays clobbered the Rangers by the same score: 19-4.

What are the odds of that?

Toronto scored a flurry of runs in their third-highest scoring game in franchise history. Only their 24-10 win over the Baltimore Orioles in 1978 and the Jays’ 20-11 victory over the Tampa Bay Devil Rays in 2002.

The fact that the Blue Jays scored 19 runs against the Texas Rangers is poetic if you think about it.

How many runs? #BlueJays pic.twitter.com/XyGxOqX5tv

The Blue Jays amassed 21 hits against the Rangers’ pitchers, aided by four home runs and nine doubles. Bo Bichette finished the game with four hits, while Justin Smoak, Danny Jansen, and Randal Grichuk all had three hits a piece.

By far, it was the most impressive single-game offensive output the Blue Jays had put forth in nearly two decades.

The Blue Jays put the game on ice with an eight-run third inning, but really put this game away when Brandon Drury hit the first grand slam of his career the following inning.

The poor Rangers pitchers barely had a chance as they turned to one of their own position players to serve as the mop up man in the top of the ninth inning.

This DJ wants to keep the party going 🔥 #LetsGoBlueJays pic.twitter.com/cQiMMEHV6I

Pre All-Star break, the Blue Jays scored the 22nd most runs in MLB, but since the break, they’ve continued to flex their offensive muscles and have scored the fifth-most runs in the second half of the season.