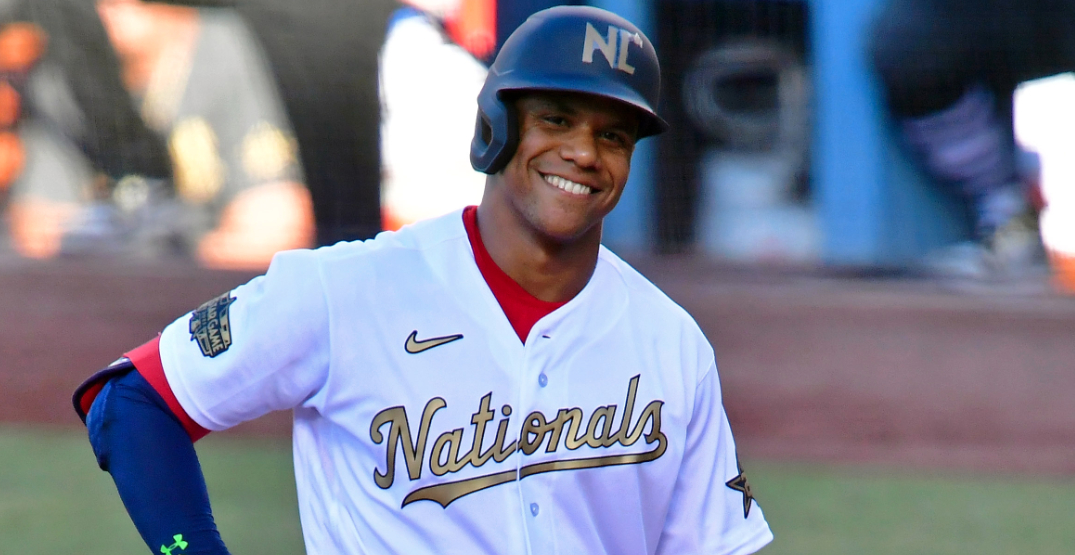 “Come on over with us. You’d look better in blue,” he told Soto, according to Rob Longley of the Toronto Sun.

It might not be so far-fetched to think the Blue Jays could be a contender for one of baseball’s top young players. The Blue Jays, after all, are among the favourites to land Soto, who has 20 home runs and 43 runs batted in to compliment a .250 average with a .901 ops with the Washington Nationals this season.

Espinal talked to Soto after the game and said – “Come on over with us. You’d look better in blue.”

Toronto is listed as a +700 favourite to land the 23-year-old, according to BetOnline. Those odds are the fifth-best in the league, trailing the favourite New York Mets at +400. The New York Yankees, San Fransisco Giants, and Los Angeles Dodgers are also in the mix with more favourable odds.

“A couple weeks ago, [the Nationals] were saying they will never trade me, and now all these things come out. ” the outfielder told reporters at All-Star Media Day on Monday. “It feels really uncomfortable. You don’t know what to trust. At the end of the day, it’s out of my hands what decision they make.”

Soto’s name has gone through the rumour mill the past few weeks after he reportedly declined a 15-year contract extension that would see the Nationals pay him $440 million, according to The Athletic’s Ken Rosenthal.

Soto, who was crowned champion of the 2022 MLB Home Run Derby on Tuesday after beating Julio Rodríguez for crown, is already under team control through the 2024 season.