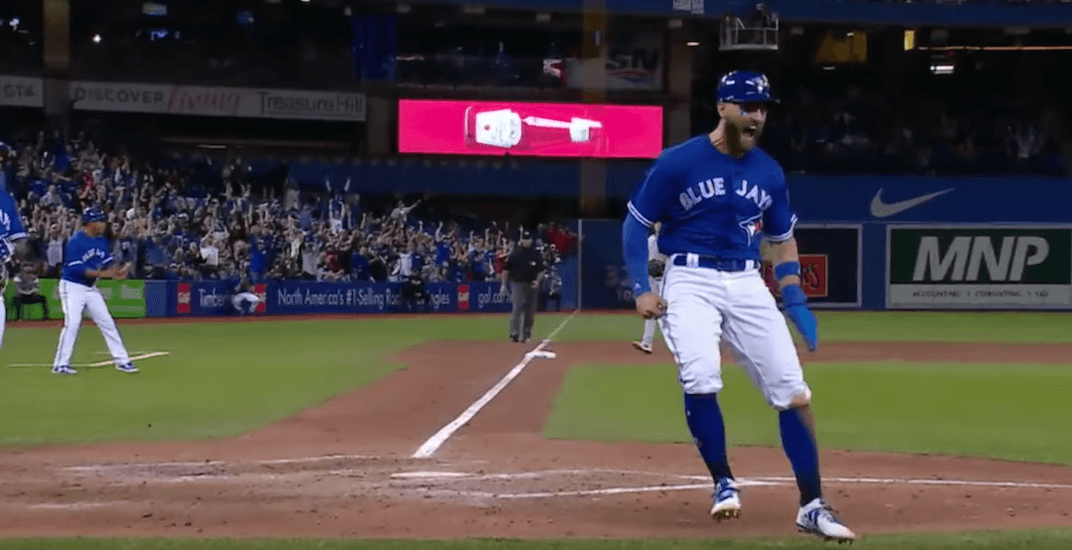 In years past, it was easy to come up with handfuls of highlights and impressive takeaways after a successful year on the field. This year? Not so much.

It was a season littered with low points for the Toronto Blue Jays.

The club was decimated by injuries. In addition, they were one of the worst fielding, pitching, and base-running teams in baseball and saw many long-time players like Josh Donaldson, J.A. Happ, and Roberto Osuna traded away.

This was a year of transition for this team … and looking into next year and beyond, it might actually get worse before it gets better.

Before we paint a completely grim picture, there were some fun and memorable moments from this season. Here are the top-five Blue Jays plays during the 2018 season.

5. Pillar steals second, third, and home in one inning

Call it gutsy, call it reckless, call it instincts, call it pure luck, but Kevin Pillar did the unthinkable way back during the third game of the regular season; he stole all three bases in one inning.

Pillar became the first player in 22 years to rob second, third and home in the very same inning. It would prove to be an important play as Pillar’s base-running gamble added an insurance run off Dellin Betances to help give the Blue Jays an eventual 5-3 win.

At first glance, this play might not seem very difficult.

After a few dozen viewings, it becomes clear that Randal Grichuk simply made this play look easy. Not only did he bring a ball back into the yard, but he fought the outstretched hands of Astros fans in the stands.

The game-tying run was also standing at home plate, so if Grichuk doesn’t catch that ball, the Astros tie the game and who knows what happens beyond that. Grichuk’s grab still stands as the best Blue Jays catch of the year.

So, about last night…

It was 8-2 in the NINTH. And then the INCREDIBLE happened. #Walkoff pic.twitter.com/DQZWQyFEx2

The wonderful thing about baseball is because there are so many variables, you could watch thousands upon thousands of games and still see something new. This game was a stark reminder to never tune out and to never leave a game early because you might witness an unbelievable comeback.

Entering the bottom of the ninth, the Blue Jays had a 0.4 per cent chance of winning the game. Given the 8-2 score and three outs remaining, there was a 99.6% probability of the Blue Jays losing that game.

They did the unthinkable, rallying from six runs down and eventually winning thanks to a walk-off solo home run from Justin Smoak.

Let's get the firsts out of the way!

One touted as the Blue Jays’ first baseman of the future, Tellez has seen his ups and downs since his breakout 2016 campaign in Double-A. He battled his way up the Blue Jays’ depth ladder and earned a promotion to the show on September 4.

Tellez lost his mother to cancer just a few weeks prior to his MLB debut. With that loss weighing heavily on his mind, he came to the plate and delivered the most magical moment of the Blue Jays’ season.

1. Vladimir Guerrero Jr. walks it off in Montreal

You can't make this stuff up… Vladimir Guerrero Jr. with the walk-off home run IN MONTREAL. (via @BlueJays) pic.twitter.com/WVSZjigkh0

The fact that this particular play lands at number one should tell you everything about how sideways the 2018 season went for the Blue Jays.

It came during an exhibition game in Montreal on March 27, before the regular season had even begun. Looking back, it’s easy to say the 2018 Blue Jays peaked well before the first pitch flew on Opening Day.

Vladimir Guerrero Jr. is the next big building block of the Blue Jays and to have him hit a walk-off home run, wearing his father’s number, in front of Montreal fans … there was no better ending than that.

There are plenty more Vlad bombs where that came from, but this was hopefully just a small appetizer of what’s to come from Guerrero.