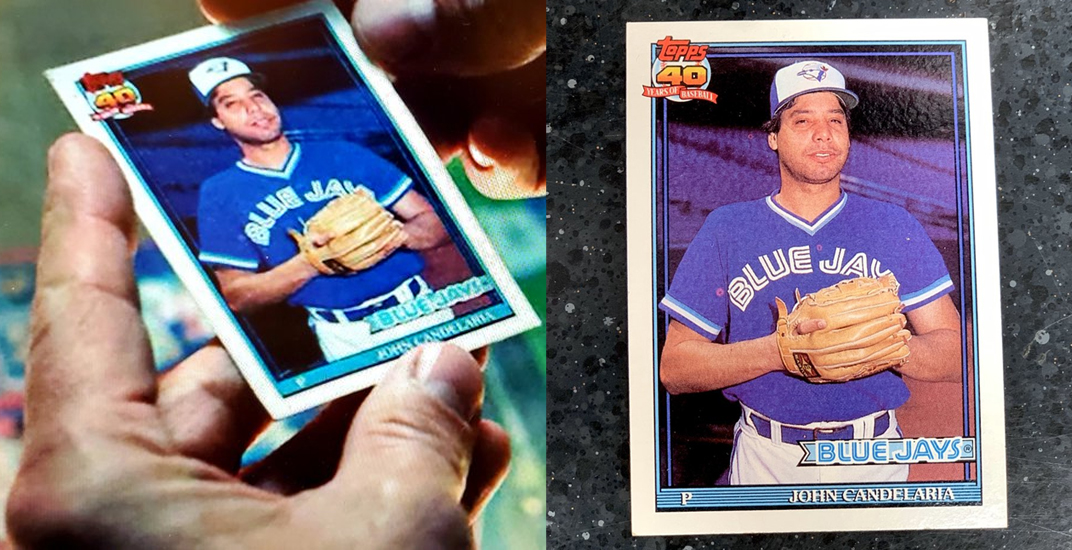 Eagle-eyed viewers of the TV show “This Is Us” may have noticed a cameo by a former Toronto Blue Jays player in the latest episode. The phrase “cameo” is being used extremely loosely here.

At the very end of the season 4 episode entitled “Clouds,” the character of Kevin reunites with a baseball card that had eluded him for decades; a 1991 Topps baseball card featuring Toronto Blue Jays pitcher John Candelaria.

A weird little Blue Jays TV easter egg, but John Candelaria's 1990 baseball card appears in the latest episode of "This Is Us". pic.twitter.com/zM2iPuTocp

If the name doesn’t ring a bell for Blue Jays fans, that’s because Candelaria spent the bulk of his MLB career as a member of the Pittsburgh Pirates. He was acquired by the Blue Jays at the 1990 trade deadline and he pitched in 13 games down the stretch for Toronto.

As far as baseball cards go, the Candelaria is hardly the “white whale” of collections as it’s listed for less than $1 on most baseball card resale sites. However, the card was symbolic for the character Kevin, who wanted a token to remember his mother by.

During the episode, in a flashback to his childhood, Kevin begs his mother Rebecca to take him to the baseball card store to buy some cards with the money he earned from some good grades on his report card.

The mother and son spend some quality time rifling through packs of baseball cards before finally coming across the missing piece to Kevin’s collection. The actor who plays Kevin, Justin Hartley, summarized it best in this tweet:

He might not have always been good at showing it, but Kevin really does love his mom, and this for him is more than replacing the card from his collection. It’s about holding onto the memory of a wonderful day and the wonderful times. #ThisIsUs pic.twitter.com/uz7yv4r6iU

So, why was the Candelaria card chosen of all the players in the set? A representative from This Is Us told Daily Hive that the writers liked the idea of featuring a baseball player who started and ended his career as a member of the Pittsburgh Pirates.

Candelaria broke into the majors in 1975 with the Pirates and watched his career come full circle as a member of the 1993 Pittsburgh Pirates. Pittsburgh is a central setting for the show “This Is Us” and the city’s pro sports teams have been a fixture throughout the show’s four seasons.

Oddly enough, this isn’t the first time a Blue Jays baseball card has appeared on film or television. Fred McGriff’s 1989 Fleer baseball card can be briefly viewed during a scene of the holiday classic “Home Alone”.

If Blue Jays fans didn’t who Candelaria was before, at least they know a little more about the guy who played in Toronto for two months. At the very least, he’ll be remembered as the only Blue Jay to appear on “This Is Us.”