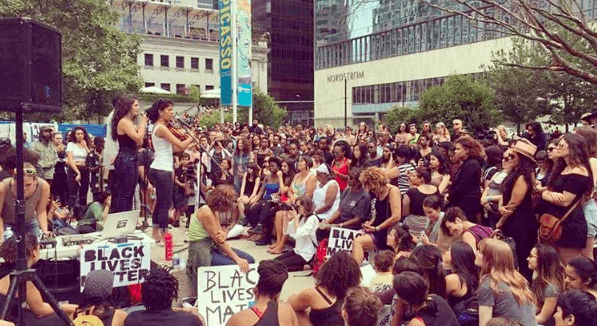 The Vancouver chapter of activist group Black Lives Matter held a vigil at the art gallery on Sunday afternoon, and hundreds of people turned up to show their support.

The vigil came as a result of the deaths of two black men – Alton Sterling and Philando Castile – in the United States at the hands of police officers. Castile was shot in front of his four-year-old daughter and his girlfriend during a routine traffic stop, and the whole thing was caught on video.

The Facebook event page for the vigil paints a grim picture of what life is like for black people in North America.

Vancouverites united on Sunday in the wake of these tragedies. Here are 14 photos of Sunday’s Black Lives Matter protest at the Vancouver Art Gallery.

I love you my black brothers and sisters #blacklivesmatter always with the oppressed. #blacklivesmattervancouver the amount of people that stopped to take a pictures with me and supported me was amazing! there are more signs of course

In 2016 alone, 135 unarmed Black people have been murdered by police. Tomorrow on Sunday July 10 at 12:30 PM, @BLM_Van will be holding a vigil for Alton Sterling, Philando Castile, and the countless Black lives lost at the hands of anti-black racism and police brutality. The vigil will take place at the Vancouver Art Gallery. For a list of where to donate and what supplies are needed, visit the Black Lives Matter Vancouver Facebook page (link in my bio). Come, be present, stand in solidarity. #BLACKLIVESMATTER #AltonSterling #PhilandoCastile #HandsUpDontShoot #Vancouver #VanCity #BLMVan

•Black Lives Matter• Today @blm_van created space to foster community, encourage solidarity in the midst of the grief and outrage at the vigil for Alton sterling and Philando castile. So Beautiful and encouraging to see so many people out reaffirming our lives and crying for justice #blmvan #blacklivesmatter #altonsterling #philandocastile #justiceforall #vigil #vancouver