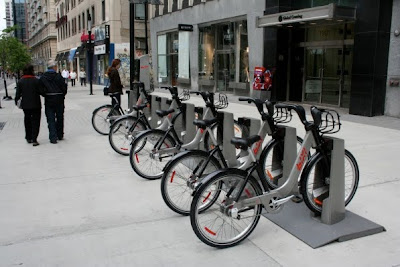 Image: Fagstein
Vancouver’s bicycle revolution continues as it was announced yesterday that the City of Vancouver will finally get it’s very own Bixi (bicycle + taxi = bixi) system. The Bixi system, modeled after the awesome program in Montreal, is a city-wide public bike-sharing program, which allows a person to pick up a bike at any one of the stations around the city, ride around and drop them off at another station when they are done. To be part of the program requires a $78 fee, plus fees for trips lasting more than a half hour. The program will be available all over the city with around 200 stations planned in the following nieghbourhoods: Mt. Pleasant, Kits, Fairview, UBC, Commercial Drive and downtown.

The announcement really should not come as a surprise to Vancouverites. The mayor is definitely making good on his promise to make Vancouver more bicycle friendly (see Dunsmuir viaduct and bike lane). Whether or not we get more people on bicycles remains to be seen and ultimately increased ridership may take a few years.

The estimated cost to set up a Bixi system is $15 million and once fully under way should be self financing. Furthermore, the city is looking at the option of corporate sponsors, and maybe even the much dreaded P3 (private-public partnerships) that have become popular in infrastructure projects, thanks to the provincial Liberals.
Let’s see how this revolution pans out. I think the Bixi program was long overdue and for a city such as Vancouver, which prides itself in being “green” I am surprised we didn’t have this in place sooner.
Update: The city will be making an announcement soon on their new bike share program.
VancityBuzz.com