Vancouver is slowly getting in to the holiday spirit. People are bundling up, staying cozy indoors, and are starting to plan their annual Christmas dinners with great food and company. But for about 2,600 people in Vancouver, Christmas won’t be as merry. Poverty is unfortunately not foreign in our city, and sadly many people will struggle to provide warm meals and beds for themselves and their families this holiday season.

One Vancouver company feels that there should be a better way to help these people, as well as providing a service for its customers, and so it is giving 50% of its profits from now until the end of January to help fight hunger in the city they were founded in.

Bite BC is a Vancouver start-up that was founded about a year ago, its membership-based diners club mobile app allows you to get 50% discounts (or 2 for 1 meals) at participating restaurants in Vancouver. Unlike coupon competitors, members can use the app almost any day of the year, as many times as they want, without having to pre-purchase meals and without any expiration dates on the deals.

From now until the end of January, Bite BC’s annual memberships will be on sale from $40 to only $15 with half of the profits going towards The Greater Vancouver Food Bank and Frog Hollow Community support charities. 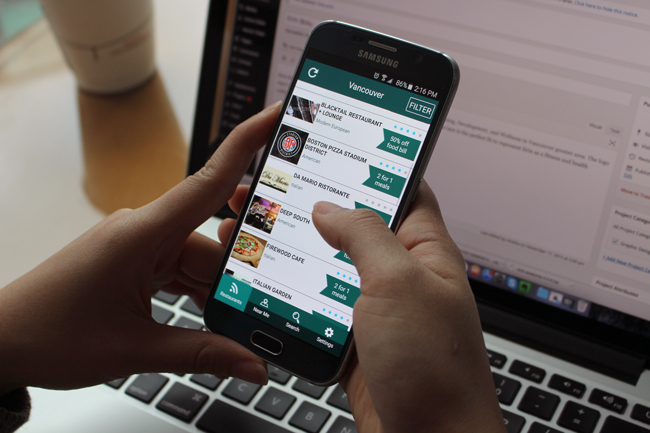 “We feel more businesses should be used as a force for good, no matter what their size and as we grow, we plan on giving even more back to help the communities we are in.” said founder, Poya Farighi.

Check out their website to see the 27 restaurants they currently have listed. With them adding new restaurants every week and their plans to expand across Canada, this app is set to be a foodie’s dream.

“I’ve had the app for 6 months and can safely say I have saved about $300 with it already, I only eat at bite restaurants now!” Blair Clements, Bite member.

Bite is adding new restaurants to the app every week, and as well as Bite’s users restaurants are loving the concept too.

“Bite has been awesome, I’ve partnered with Bite BC when they launched here in Vancouver. They’ve driven consistent quality traffic to my restaurant, The Bismarck Bar, that when I launched a new BBQ restaurant in the city named Deep South, I made sure to partner with them as soon as we opened our doors.” Brinson Silver, restaurant owner.

This is a company we should definitely be watching out for, we see big things in the future for them. So get out there and get your memberships now to help fight hunger for yourself and the community.

Download the app now for iPhone or Android and use the promo code: hungersucks when purchasing membership, to get one year’s membership for only $15.