The DTES local area plan will be developed in partnership with the DTES Neighbourhood Council (DNC), Building Community Society (BCS), and the Local Area Planning Committee.

Through each phase of the planning process, there will be a range of community engagement opportunities, where Vancouverites can share their ideas and offer feedback.

The Downtown Eastside is a collection of neighbourhoods, and each area will benefit from this billion dollar improvement plan. 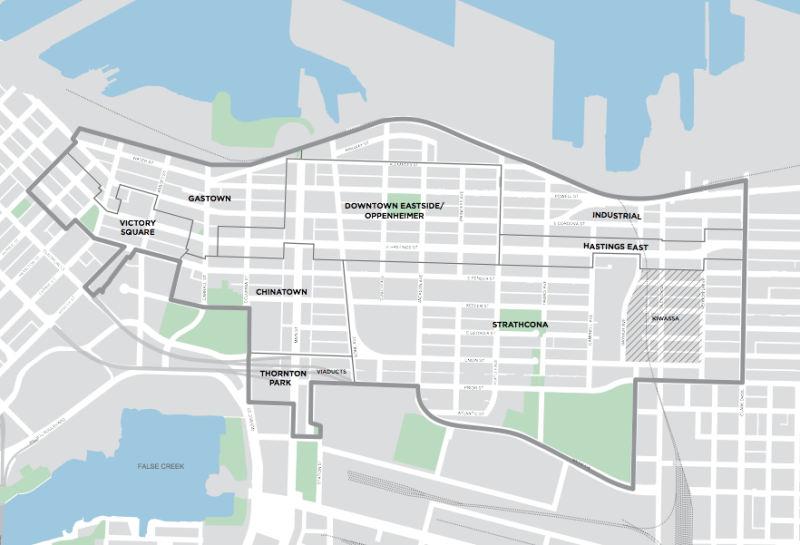 Victory Square is Vancouver’s historic downtown and is the transition area to the Central Business District. Named for Victory Square Park, a significant public park and ceremonial space, the area’s primary streets include Hastings Street, Pender Street and Beatty Street.

The aim of the plan is to facilitate compatible new residential and mixed-use development, while reinforcing the existing scale and character of the area. The plan calls for rehabilitation of heritage buildings, including residential (SRO) hotels. 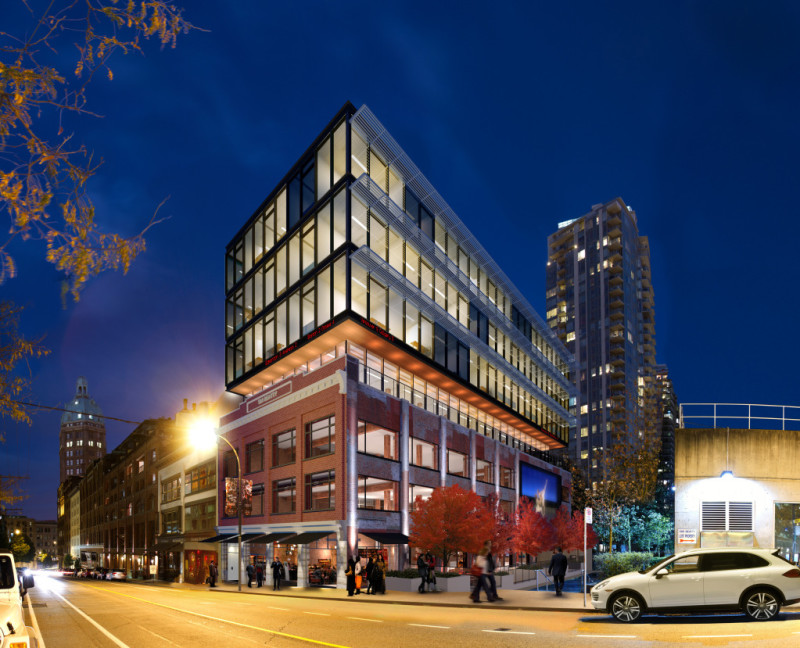 The plan for the Victory Square area also calls for the continued fostering of growth as an emerging centre for arts, culture, and higher education uses along with increase in office space, especially along Beatty street up to Dunsmuir (see example of such addition in the photo above).

Vancouver’s first municipal neighbourhood, Gastown has long been recognized for its historic value and rich architectural character. In 2009, the neighbourhood was designated as a National Historic Site.

Predominantly defined by Water Street and Maple Tree Square, Gastown has significant public realm areas including the Carrall Street Greenway, the former CPR right-of-way, and Blood Alley Square. As an important tourist destination and retail/service area, Gastown has attracted significant investment and redevelopment in recent years which is expected to continue into the future.

Expect to see improvements in the streetscape including the possibility of a re-do of the cobblestones streets that cover Gastown’s streets.

Vancouver’s Chinatown is one of the last remaining, large historic Chinatowns in North America. It is an important cultural and tourist destination, and has long-served as a market district for specialty Asian goods and services. It is on the verge of transitioning as locals are reinvesting in the once overlooked area.

The Chinatown area includes several prominent retail and service streets, such as Pender Street, as well as numerous secondary streets that access other adjacent areas. Public spaces are defined by larger public and private parks and open space, including the Dr. Sun Yat-Sen Classical Chinese Garden as well as the fine-grained pattern of streets, lanes, breezeways and courtyards. 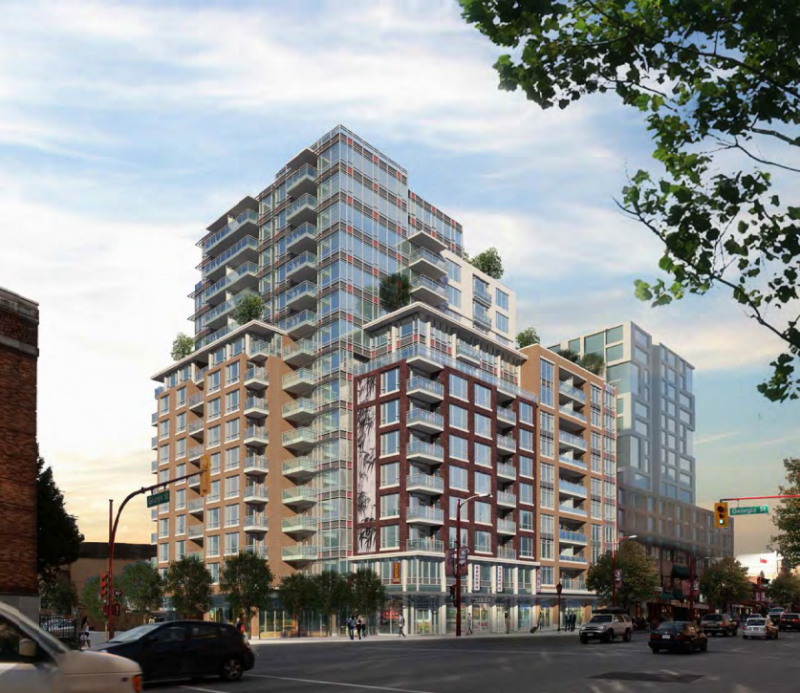 A midrise development currently under construction in Chinatown 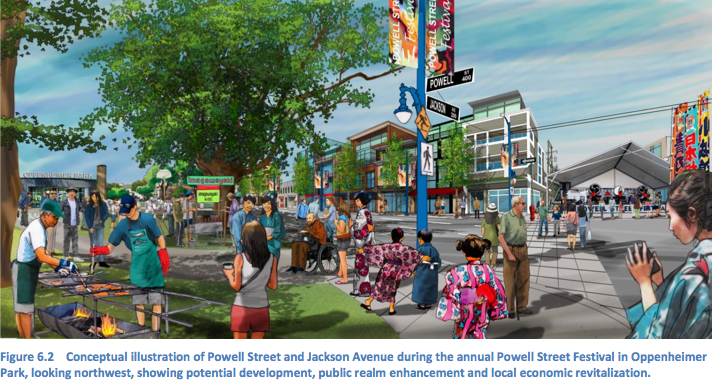 The Downtown Eastside Oppenheimer District (DEOD), a.k.a Japantown, is a central neighbourhood of the DTES and is the heart of the low-income community. With its origins dating back to pre-settler history as the site of seasonal trading camps of the Coast Salish aboriginal communities, the area has been home to numerous immigrant groups over the past 120 years. Two of its most notable early associations is with the Japanese-Canadian community and its longstanding linkages to industry and the labour movement.

The plan affirms the base development rights for the neighbourhood, and updates the zoning’s bonus density mechanism to meet the goals of the Housing Plan by prioritizing the area for rental housing. Using innovative development models, the City will encourage mixed-income rental buildings (60 percent social housing and 40 percent secured market rental), to build and support sustainable social housing units and encourage market rental development rather than strata-ownership housing in the area.

In addition to housing, the plan identifies and encourages commercial activity in the DEOD through upgrading existing commercial uses and developing new commercial uses which serve both local residents and the working population. This will be achieved through land-use policies to ensure locally-serving uses meet the needs of residents, and through future exploration of retail policies to encourage and support small, local businesses (i.e. maximum frontages or floor areas for certain uses).

In addition, moderate bonus density is available without the social housing requirement to support the expansion of existing commercial and industrial uses. 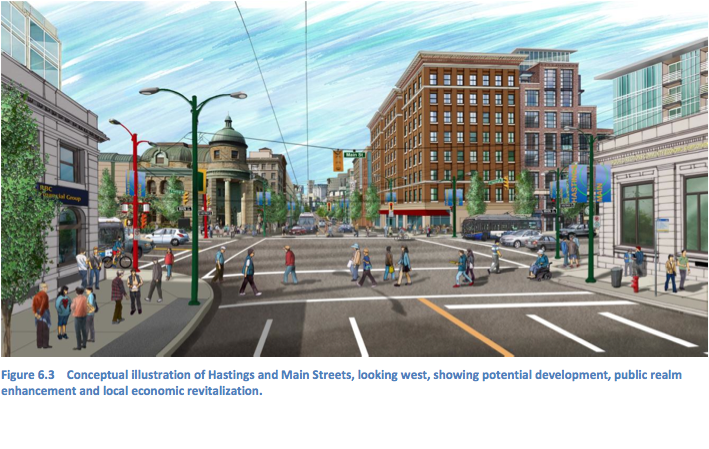 Hastings Street is the principal street of the DTES, crossing most neighbourhoods and serving as a significant regional transportation route. This street has always had different character areas along its stretch, and today it still embodies different roles as it passes through different neighbourhoods. In certain sections, it was once a historic “great street”, with a vibrant commercial and retail function, with high pedestrian volumes and numerous small businesses serving local residents. 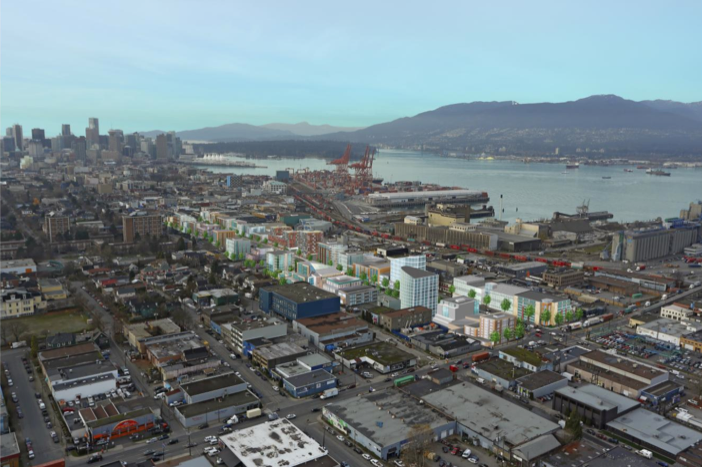 An objective of the plan is to make Hastings Street a “great street” again, with focussed efforts on building vibrant hubs along different sections to meet the needs of the communities through which it passes. To do this, the plan addresses the Hastings Street corridor in three parts: Hastings – West (Victory Square), Hastings – Centre (DEOD – Sub-area 1), and Hastings – East (M1) for which smaller sub- areas have been proposed (Heatley Avenue to Campbell Avenue, Campbell Avenue to Glen Drive, and Glen Drive to Clark Drive).

Furthermore, it sets the foundation for additional work to develop and detailed urban design framework including a public realm plan for this significant corridor. 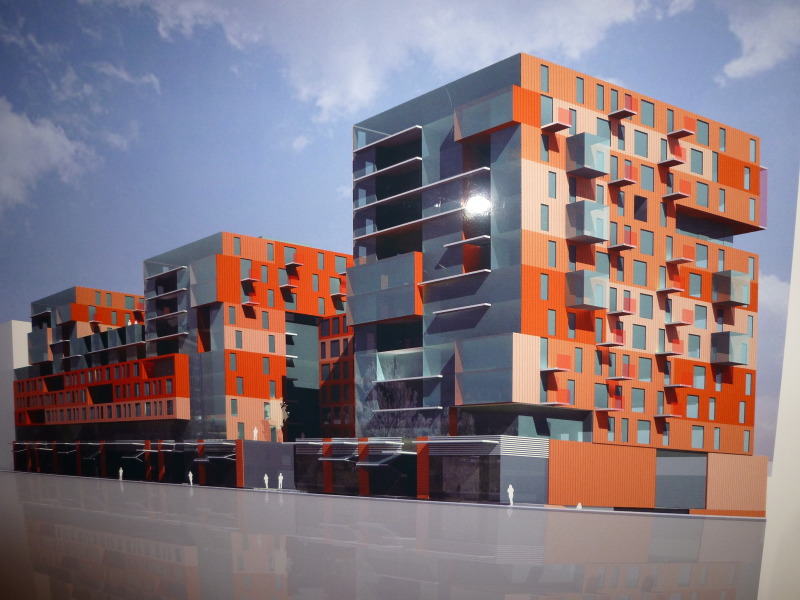 Strathcona is a primarily residential neighbourhood that forms a significant portion of the DTES, with Kiwassa being a smaller sub-area within Strathcona. It is a diverse neighbourhood with a mix of residential homes, including single family, co-ops, apartments, and several medium density social housing developments.

Some areas of Strathcona also include light industrial uses, wholesaling and commercial activities.

Railtown is a small industrial area of the DTES, defined by its unique built form and street configuration. It’s a neighbourhood that has emerged in recent years and is becoming a hub of activity attracting entrepreneurs and established businesses alike. Aritzia’s head office is one of the more prominent located in Railtown.

Centred primarily around Railway Avenue and Alexander Street, from Princess Avenue to Main Street, Railtown is an informal sub-area of the larger industrial area supporting the rail and port.

In the western portion of the Railtown area, there are a large number of heritage warehouse buildings that have been converted to office use. Community interest has developed around identifying and marketing Railtown as a special area, with emphasis on the growing cluster of small, high-tech, creative, and design sectors, noting there are successful industrial uses and businesses are also located in the area.

The goal of the improvement plan is to affirm and update Railtown’s role as a historic warehouse district with a mix of local, regional, national, and global-serving industrial and office uses.

The City reviewed the Georgia and Dunsmuir viaducts land as part of a larger strategic planning review of the area called the Eastern Core, which includes portions of North East False Creek and the False Creek Flats. The viaducts, which are two elevated roadways connecting the Eastern Core area to downtown Vancouver, are the remnants of a 1960s freeway system that were abandoned after significant public opposition, much of it from the Strathcona and Chinatown communities.

Through their construction, the viaducts had significant impact on the DTES including the loss of the physical and social heart of Vancouver’s Black community, known as “Hogan’s Alley”.

Through their continued existence, they also cut off many neighbourhoods from the False Creek waterfront and each other, including Chinatown, Strathcona, and Thornton Park. A proposal to replace the Georgia and Dunsmuir viaducts with an at-grade road network has been put forward to dramatically improve the area. The key benefits associated with the removal of the viaducts include:

Given the sensitivity to the amount of housing need, condition of current low-income housing in the private sector (i.e. SROs) and consideration for mental health and addictions support services, the housing objectives for the DTES have been strategically staged over the life of the plan.

The first 5-10 years will be to mobilize partnerships and innovation to address the current housing and health crisis in the neighbourhood. Years 10-30 will continue to build and sustain a vibrant and affordable community next to the urban core. 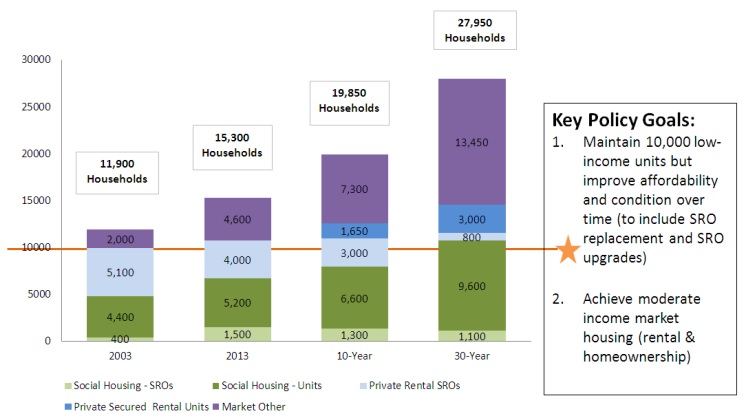 The transportation network, which includes sidewalks, bikeways and greenways, transit routes, major and local streets, and laneways, is an essential component of our communities, the city, and the region. Enhancing sustainable transportation choices will allow us to address the challenge of continued growth without increased road space.

Pedestrian mobility is an important priority for the DTES Community, both as an active mode of
transportation and as an affordable one. Concerns about walking safety and accessibility have been highlighted in various studies specific to the area and some of the highest pedestrian collision locations in Vancouver are located within the DTES. Recent changes to Hastings Street, such as reducing the speed limit to 30 kilometres per hour, installation of countdown timers for pedestrians, and adding a mid-block crosswalk between Main Street and Columbia Street, are aimed at improving safety for people on foot.

Focusing enforcement on unsafe behaviours, such as speeding, reckless driving and cycling, and failing to yield to people crossing the street in marked and unmarked crosswalks, is a high priority.

Enhancing the comfort and safety of the streets throughout the neighbourhood can help to encourage walking. Potential connections to the waterfront and across the railway will
help to improve the connectivity throughout the community.

Cycling provides a low-cost, healthy, and sustainable transportation option to the residents of the DTES, especially considering the close proximity to the downtown core. The Adanac Bikeway is one of the busiest bike routes in the city and has recently undergone upgrades to make it safer and more comfortable for people of all ages and abilities.

Providing additional east-west cycling routes will help provide alternate options to the Adanac Bikeway. New north-south bike routes will help improve connections to the waterfront, False Creek and, in the future, the updated Great Northern Way Campus. Routes should be designed to accommodate people of all ages and abilities and to reduce conflicts between road users.
This may include separated bike lanes on high-volume routes.

The DTES is served by several bus routes and transit ridership in the community is high. Future high capacity transit and restoration of the streetcar routes could help to further improve transit connections in the DTES.

The port adjacent to the DTES is linked by a north/south rail corridor and provides a significant asset and opportunity for the community. Mitigating the negative impacts of the movement of goods to the port may come through future improvements and road/rail separation.

The plan for the improvement of the DTES is essential and a key turning point in the city’s future. As downtown Vancouver becomes built out there will be continued pressure eastward to expand. The DTES side is currently in the early stages of transformation. With a city focus to improve the public realm, it will help further establish the area as the creative and cultural hub of the city.

The plan goes before council on March 12.