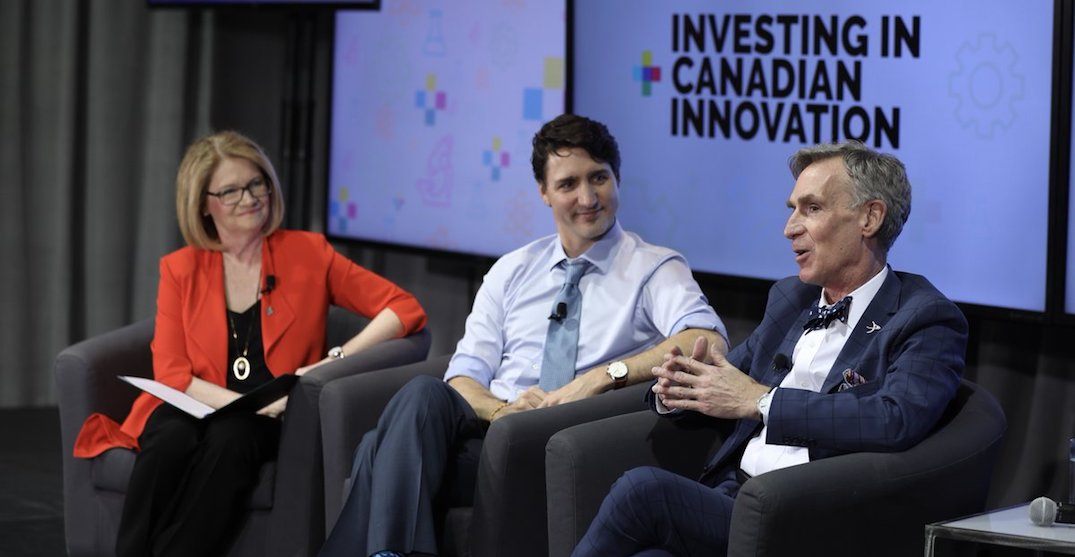 An hour into Justin Trudeau’s armchair discussion with Bill Nye ‘the Science Guy,’ all seemed to be going as planned.

The unlikely duo discussed how the government plans to invest in Canadian innovation, and the topics they touched on ranged from fighting diseases to developing new technology.

The event, which took place in Ottawa on Tuesday morning, took a turn in the last few minutes when Nye raised questions about the Kinder Morgan pipeline.

“I’ve been to Fort McMurray, Alberta. It really is an amazing place in the most troubling way,” Nye said. “But this pipeline… tell us about the Kinder Morgan pipeline.”

Nye then cited a study from The Solutions Project which found that Canada could entirely replace fossil fuels by switching to renewable energy sources.

“Nevertheless, there’s this enormous fossil fuel industry,” said the Science Guy. “Tell us about that.”

And while Trudeau agreed there are potential for renewable energy, he said “we aren’t going to get there tomorrow.”

“We are going to have a transition phase while we develop alternatives to fossil fuels,” Trudeau said. “We still need to be able to power our homes, our cars, our economy, and we have to do it in the most efficient and non-polluting way.”

In November, The National Energy Board (NEB) permitted Kinder Morgan to skip the City of Burnaby’s bylaws that act as obstacles for the Trans Mountain pipeline expansion project.

And last month, Trudeau was quoted saying, “That pipeline is going to get built.”

Meanwhile, some Canadians expressed their frustration at Nye, who is technically not a scientist. The American television personality is a mechanical engineer who became a household name in the 1990s thanks to his PBS children’s show “Bill Nye the Science Guy.”

@JustinTrudeau and @BillNye lecturing us about science, the economy and climate is like a real pro boxer being coached by Mickey from Rocky #cdnpoli #TrudeauScienceisms #Trudeau pic.twitter.com/fFKQsdOL6p

Stop calling this man a scientist. He’s as much a scientist as I am a lawyer. Actually no, I’m more of a lawyer cos that was actually my 1st undergrad. He doesn’t have a science degree at all. Could they not have found an actual legit scientist to challenge Trudeau properly?

Science in CANADA… So let’s get an ACTOR from America.