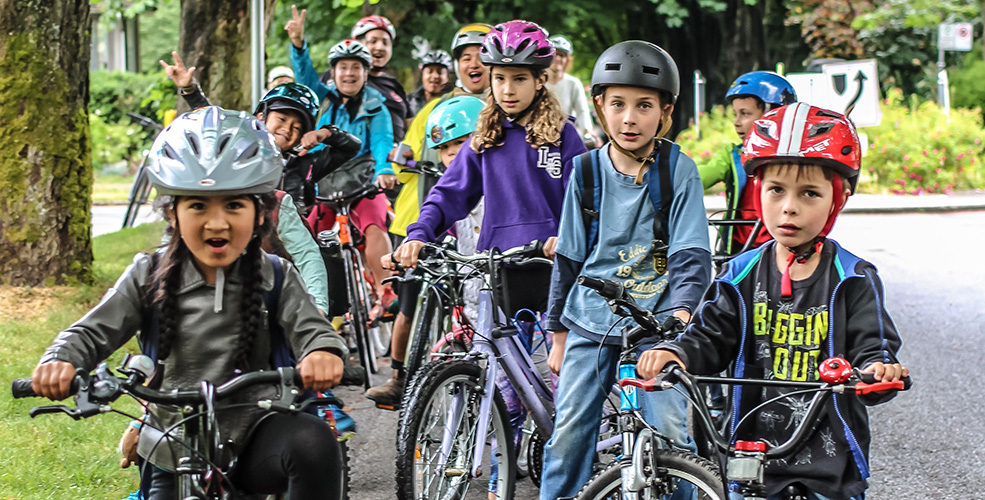 A few weeks ago, while over 11,000 adults participated in HUB’s bi-annual Bike to Work Week, logging their trips to and from their office, the next generation of bicycle riders were actively getting to school as a part of a tandem event – Bike to School Week (BTSW).

Each spring since 2009, HUB has recognized that getting school-aged children to make cycling a regular habit is just as important as their adult counterparts – maybe more so. 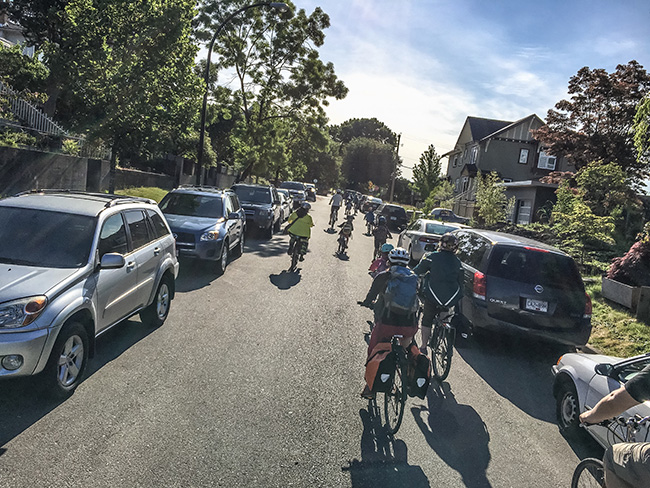 The goal of BTSW is to encourage more kids to try getting to school by bicycle, and hopefully, increase the number of trips logged; creating a healthy pattern that will continue to grow throughout the school years and into adulthood.

The Vancouver School Board has historically had high participation in the event, and so in recent years, HUB has started focusing beyond the city borders, working to increase participation by schools throughout Metro Vancouver.

This year, over half of the school in the North Vancouver School District participated, and in Maple Ridge/Pitt Meadows, participation increased from just one school last year to five this year. In total, the number of school who registered for the event increased from 103 in 2015 to 118 this year, logging an average of 250 trips per school, and has been growing steadily each year. 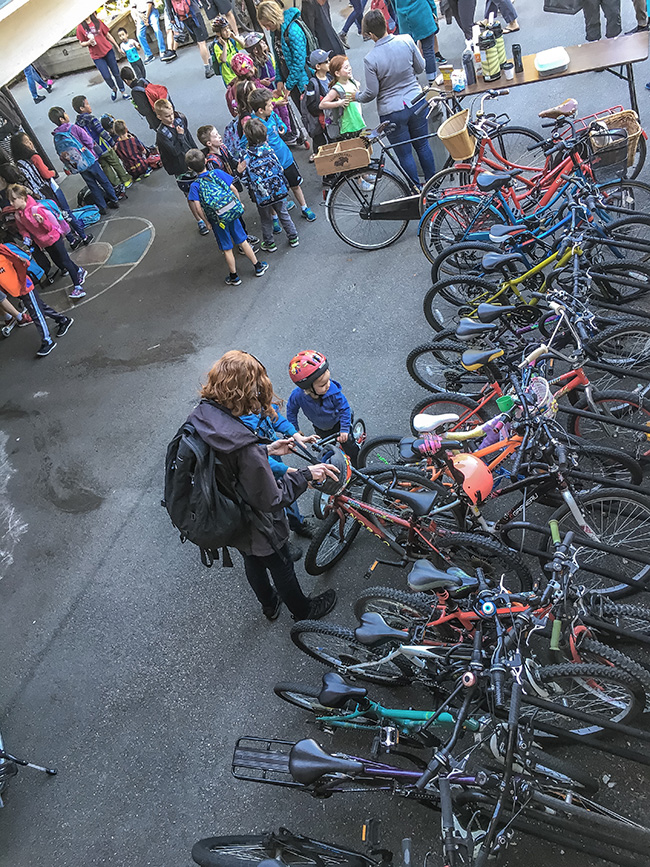 “Bike to School Week is currently only in the spring because the sense has been that schools are ‘not yet ready’ to promote a fall biking event. However, with participation and excitement growing in recent years it may be time to look at this again!” Gray says.

Laura Secord Elementary School – where our children currently attend – was one of those schools who joined in on the event for the first time this year. As an East Vancouver school, they already experience a high number of students arriving by active travel, but as a part of their participation in HASTe’s School Travel Planning program, they felt they needed to step up their game.

Their BTSW team, comprised of parent volunteers, organized several “Bike Trains” and “Walking School Buses”, where student could meet up with peers at designated meeting points and travel to school safely as a group. These community events offer an opportunity for less confident riders to build their skill among peers, feeling a sense of accomplishment. 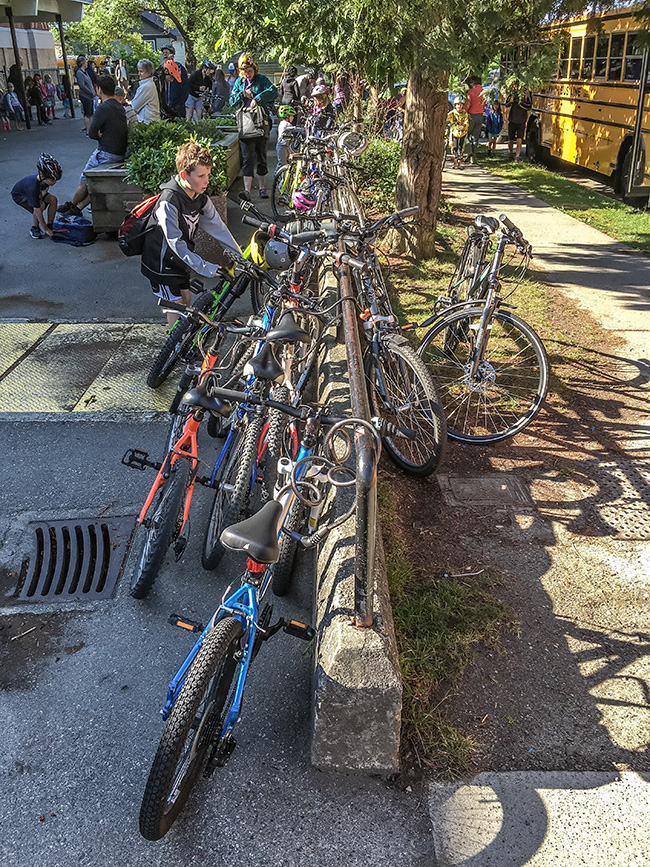 For one kindergartener, whose home lies just a bit further than she is able to ride yet, BTSW was her chance use her own will-power to get to school.

“The patience and kind sharing of the volunteers’ time and talents were an invaluable gift to my daughter, whose skills in bike safety and enjoyment grew so much during the week,” her mother shared.

Similar sentiments were shared from all the ride and walk leaders, noting the increased confidence of older students to lead the pack, and watching as younger students grew in skill and ability just over five day event. 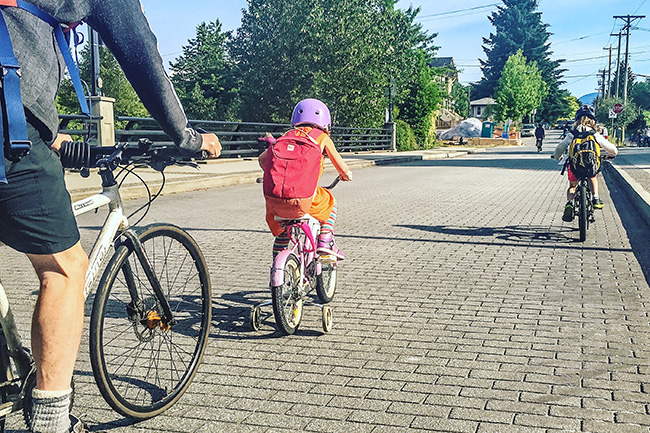 Another parent and Bike Train leader noted how the event was not only great for the children participating, but also the parents.

“It was a beautifully organized event, and being part of the daily trains was a fabulous way to begin my days. I showed up at my workplace happy and invigorated, and even convinced two other co-workers to start biking to work.”

Stories like these point to why BTSW and similar active travel events like DASH’s Walk and Wheel to School event in early October are so important for building good habits for children. 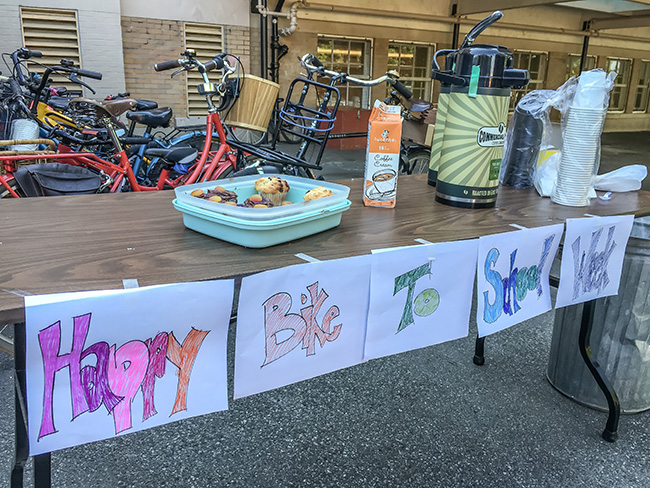 Aside from the well-documented health benefits, an increase in students arriving by foot, bicycle or any other people-powered mode means a safer environment at the school during pick up and drop off, with fewer cars idling, and, more importantly, the building of the community as students and parents begin travelling together, forging bonds that will last years to come.

“There is something special about seeing a schools bike racks, fences, and everything that is tied down covered in bikes during this one week in spring. It creates a feeling of nostalgia for many teachers and parents, and is such a visible and obvious sign of change and momentum for the students,” says Gray.

As two of those parents, we couldn’t agree more!