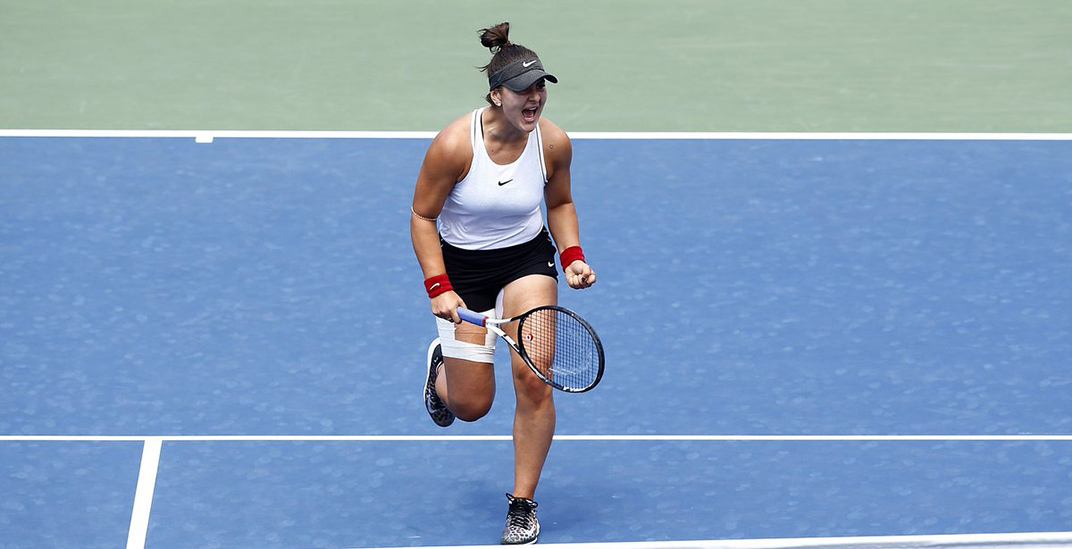 It took her five match points but she finally did it.

While Bianca Andreescu’s 6-4, 7-6 (7-5) semi-final win over Sofia Kenin may not have been a three-set showstopper like the four matches she played to get this far, it was an exciting match featuring a thriller of a second set.

“I’m glad it was two sets today but it wasn’t easy,” Andreescu said on court after the match Saturday.

In that roller-coaster second set, Kenin (ranked 27th in the world) drew first blood, breaking Andreescu (ranked 29th) for a 2-1 lead. From there the 19-year-old Canadian won the next four games to grab a 5-2 stranglehold on the match. Of course, a win would never be that straightforward for the cardiac kid from Toronto.

The 20-year-old American then went on a run of her own, winning three games in a row to bring the set to 5-5.

“She came back. I was so so nervous, I’m not going to lie,” said Andreescu.

The next game had everything. With Kenin about to serve at 5-6 to stay in the match and force a second-set tiebreaker, she called for a trainer and took a medical timeout. The game had seven deuces and saw Andreescu have three match points to end it.

Kenin fought each one off as they both traded powerful groundstrokes back and forth before she finally held serve.

In the tiebreaker, Kenin fought off one more match point at 4-6 on her own serve, but on the next point, Andreescu serving at 6-5, she finally got over the edge.

“I just felt like crying after because I’m just so happy to be back on court right now and to be in the finals of the Rogers Cup.

.@Bandreescu_ is the first 🇨🇦 to reach the @rogerscup singles final since 1969, after defeating Sofia Kenin in her first straight-setter of the week –> https://t.co/XmXxaEsy86 pic.twitter.com/QDEBLy0JQQ

The 19-year-old is already the first Canadian woman to play in a Rogers Cup semi final in 50 years, and now she’ll try to be the first female to win the tournament in 50 years. She will face the winner between Serena Williams and Marie Bouzkova on Sunday.

“If Serena gets to the final, I’ve always wanted to play her, so I’m beyond excited and beyond grateful right now,” Andreescu said.

The Canadian won her first WTA tournament earlier this year in Indian Wells.

With her win on Saturday, she will be ranked in the top 20 for the first time in her career.

An emotional Bianca Andreescu addresses her home crowd after reaching the #RC19 final.pic.twitter.com/1PCJ4ODHvJ