Many of us used to think Vancouver was a no-fun city. Take it from us – that’s just not true anymore. But on those rainy nights when you feel like staying in, nothing’s better than a couch and a fresh episode of your favourite show lined up on TELUS Optik TV™. With so many channels to choose from, keeping track of what’s on what station can be tough. That’s why every week we bring you our roundup of which shows to mark in your schedule.

Don’t be left out of the water cooler banter this week. Here’s what’s happening on TV from November 29 to December 6.

A classic since its premiere in 2011, the original Canadian production, A Russell Peters Christmas is sure to make your Monday a whole lot better. A number of stars and Christmas favourites will help Peters take his show to a whole other level. Featuring stars like Michael Bublé, Pamela Anderson, Ted Lange, Faizon Love, Jon Lovitz and Scott Thompson it’s a festive special you won’t want to miss. 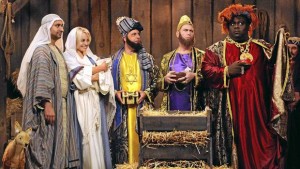 This is the third game of the four-game trip for Vancouver. Tonight, Rookie defenseman Ben Hutton, who has missed the past four games due to an injury, will be sitting out. “I don’t know if he’ll play on this trip, but he should be ready soon after,” Vancouver coach Willie Desjardins said about Hutton. The Canucks have given up at least one power-play goal in each of the past five games, allowing five goals in 20 times shorthanded in that span, including two in five chances in a 3-2 shootout loss against the Dallas Stars on Friday. Desjardin is hoping the boys can play a bit sharper and get a win against the Ducks.

Catch a brand new episode of Modern Family this Wednesday. This is another classic episode full of family drama and ridiculous antics: Jay does everything he can to get out of a seminar Gloria is set on going to. Mitchell and Cam, and Phil and Claire deal with their usual problems and Haley and Alex put on their own seminar by talking about their boy problems.

If you haven’t seen Elf before, it is a movie that is bound to make you laugh. Seriously, how can Will Farrell dressed in tights, not make you smile? The film is the story of Buddy, a human raised as an elf, who goes to New York to find his dad. While bonding with his new family, having an awkward romance, and taking down a Santa imposter, he still manages to save Christmas.