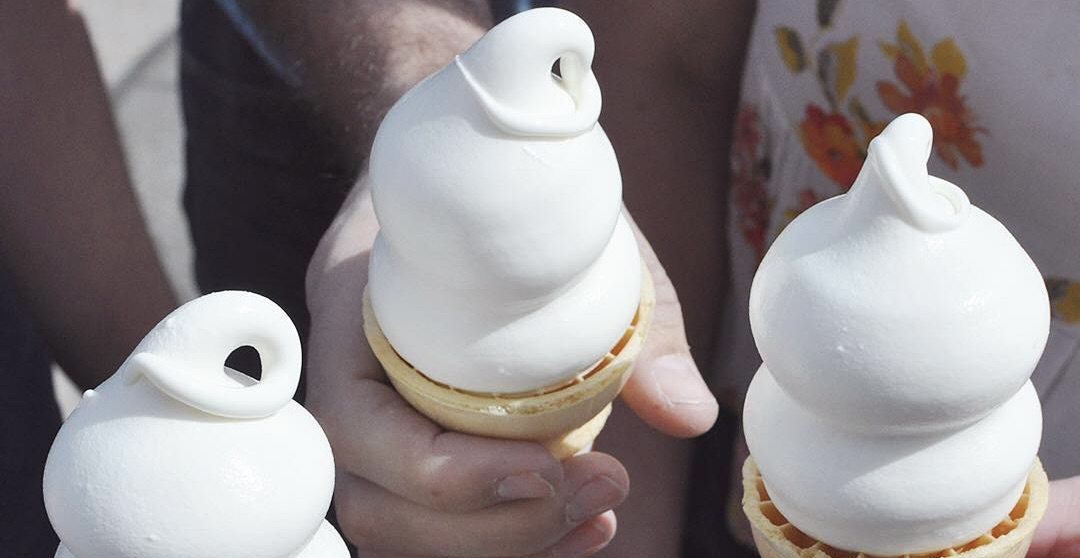 One of the surefire signs of summer? Copious amounts of fast food ice cream, that’s what.

These treats draw ridiculous crowds outside of ice cream places, weaving lines in local drive-thrus, and chocolate sauce everywhere. One of the simple joys of summer is treating yourself to some sort of fast-food frozen confection.

As with any treat, some are better than others.

Since these treats are often calorie-laden and contain enough sugar to make even an elephant go loopy, you should choose carefully. But really, you can’t go wrong with any of the treats on this list.

You can, however, take your summer treat to the upper echelon of deliciousness among fast-food summer treats.

Here are the very best and worst fast-food ice cream treats to keep you cool this summer.

A perfectly acceptable summer treat, say if you’re a six-year-old or a dog. Otherwise, the McDonald’s soft-serve cone leaves a lot to be desired. It’s as ubiquitous a summer treat as you’ll find at a fast-food joint.

Ever since I realized the ice cream has the same consistency as margarine, I haven’t been able to eat another cone since. Plus, it’s a running joke that “our soft-serve machine is broken” is the go-to line during any given summer night at McDonald’s.

Your response to this might be, “Wait, Burger King has a sundae?” – which surprisingly is correct. BK isn’t typically known for their frozen concoctions, but if you’re really in a pinch, I guess a Burger King sundae is an okay choice?

With every Dilly Bar, you’re biting into a little bit of nostalgia. Simpler times, simpler flavours, simpler tastes. It hits the mark where it’s supposed to, but with a plethora of frozen treats out there, the Dilly Bar is a pretty pedestrian offering.

Admittedly, it’s hard to pick Harvey’s milkshakes out of a lineup. Outside of the Nutella and orange cream iterations, it’s your standard fast-food chain milkshake flavours.

One major design flaw in Harvey’s shake is this: when paired with the Oreo or Smarties shake, the paper straw makes it damn near impossible to drink. It’s great that they’re trying to save the environment, but it comes at a cost.

Lumping these two together for the pure fact that barely anybody knows that Burger King even has these desserts behind the counter. If you get your hands on one, they’re pretty decent, but that’s if you can find them in the first place.

If you’ve ever sat down and finished an entire DQ banana split on your own, congratulations. This is at least a two-person operation and requires multiple team members working in unison to tackle this thing.

Basically, the standard DQ cone, minus the cone and substitute for a cup, so you don’t make a damn mess all over the place.

Yes, these sundaes are based on the very same soft-serve ice cream mentioned earlier in the list, but slather it with either hot fudge, caramel, or strawberry sauce, and all those doubts suddenly melt away. An economical and satisfying summer treat if there ever was one.

Holy sugar, Batman. One sip of these is like pure Novocaine to your nervous system. Prepare for your eyes to bug out of your head after sipping on one of these.

Some of the best things in life are simple. The peanut buster parfait is quite simply chocolate sauce, soft-serve, and whole peanuts. It’s a decent combination of sweet and salty, but DQ might’ve missed an opportunity here by not swirling in some sort of peanut butter sauce to offset the overly chocolate flavours.

A bold choice here by DQ to go with the redskin peanuts for their parfait, but it actually adds some flavour and texture to this treat.

The DQ dipped cone does what the McDonald’s cone doesn’t; it adds a little bit of fun to an otherwise boring and mundane soft-serve cone. There’s something strangely satisfying about the snap of that dipped topping that screams summer.

Whoever came up with the idea for a root beer float is a certified genius. It’s a rare treat to find this decades-old classic, but A&W pays perfect homage to the classic root beer float. The chilled mug is the key factor in this endeavour. Otherwise, what are you even doing?

The good old reliable Frosty. Unlike some of the other concoctions on this list, there’s some milk in a Frosty, which represents more of a typical ice cream flavour and texture. And no, you don’t have to worry about being judged for dipping your fries in your Frosty anymore; it’s perfectly acceptable behaviour now.

There isn’t a better fast-food chain milkshake out there than McDonald’s milkshake. Whether strawberry, chocolate, or vanilla are your poison, all are great choices, and Mickey Dee’s offers the superior milkshake choice of the bunch.

Do not sleep on the Harvey’s Shakeslush until you’ve tried one; it’s a fast-food ice cream dark horse. The orange and blue raspberry concoctions are incredibly delicious and taste exactly like a Creamsicle in a cup. Half vanilla milkshake, half slushie, all deliciousness.

If McFlurries had the same number of variations as DQ’s Blizzard, then McFlurry would give the Blizzard a run for its money. Pound-for-pound, they’re probably on par, but with a limited number of options, the McFlurry places runner-up to the Blizzard in that regard.

Although, if McDonald’s makes the Nanaimo bar blizzard a permanent staple on their menu, we might have to reconsider. For whatever reason, the Mickey Dee’s soft-serve seems a little less sugary, and the consistency veers into Fudgesicle territory sometimes, but it’s great nonetheless.

The irony about the DQ blizzard is that the ice cream itself isn’t the star of this movie — it’s whatever toppings or sauces you pack into this thing. Whether you Frankenstein multiple toppings into a Blizzard or just go with a basic one, the Blizzard is a timeless summer classic.

The sheer number of toppings, flavours and sauces you can choose for this fast-food ice cream treat are staggering, which makes ordering one a chore, sometimes. But once you find your favourite, you hold onto that thing like a beloved summer crush and don’t let go.