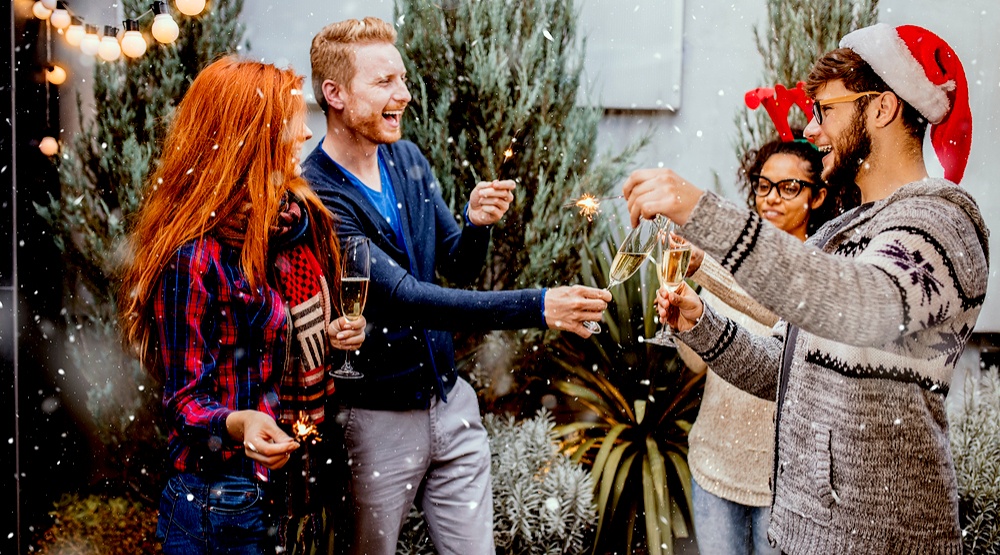 Here’s a hot holiday take for you: Sparkling wine is not a seasonal drink.

It’s the best of all possible wines, not egg nog. Relegating it to “special occasions” is both stupid and boring. Why be either of those things? This New Year’s, resolve to be your best you. Drink bubbles all the time.

Yes, it’s going to cost a bit of money, but not as much as you think. Despite what “Big Champagne” would have you believe, good fizz can be had for cheap—just not too cheap. The bottom end of the sparkling wine market is a minefield. Tread lightly.

Be wary of most Proseccos. They’re more trendy than tasty.

Don’t drink anything named “Baby.” A bottle of Baby Duck contains little more than sugar and regret. It’s the Don Cherry of wines: a Canadian icon with terrible taste.

Real sparkling wine, on the other hand, makes you feel good. It’s a fact. The bubbles cause the booze to go straight into the bloodstream. A smart host starts all parties with obligatory bubbles. However, there’s more to that good feeling than getting buzzed.

Though not just for special occasions, sparkling wine is still special. Think about that moment when a bottle pops. The sound. The spray. The release of pent-up pressure. It’s almost obscene.

Why deny yourself that thrill because it’s not a holiday? Every day’s a goddamned holiday when you’re drinking Champagne (or any of these cheaper alternatives).*

*Note: Most of these wines are on sale for the month of December because the government thinks you’re boring and will only drink them now. Show them! Buy cases while they’re cheap for year long drinking or for one particularly good party. Your call.

This is the best, cheapest sparkling wine at the BC Liquor Store. It stands tall among a forest of force-carbonated alco-pops masquerading as Champagne. In the land of cheap bubbles, Spain’s Cava is king. It’s made in the traditional method, like Champagne, which relies on time and effort to earn its sparkle. Yet Jaume Serra’s Cristalino Brut is just twelve fucking bucks. That’s mental. This stuff is delicious.

Strangers at parties always want to know what’s my favourite wine. Man, I don’t know. As a sommelier, there are only two ways to answer that question and both suck. (1) Be pretentious and say something fancy or (2) be corny and say something vague (Whatever’s in my glass! LOL). If pressed, I say pink sparkling wine. Not this specific one – a perfectly good pink Cava from Segura Viudas – but all of them. So, this one, I guess.

I really love the name of this wine. What the heck is a vaporetto? It sounds so cool, like a Bond girl, or a ray gun. All sparkling wines should make me feel like I’m in a Roger Moore-era Bond film. Turns out, vaporetto translates to “little steamer.” They’re the boats cruising the canals of Venice. Bit of a let-down, really. This stylish Prosecco won’t let you down, though. It’s cool, crisp, and dry, like Sean Connery-era Bond.

Champagne’s sure got a good thing going. They’ve more or less cornered the market on premium sparkling wine. It’s made a lot of Champagne houses fat and lazy. It’s why the cool kids drink “Grower Champagne,” or Crémants, France’s other sparkling wines. The Bailly Lapierre Brut Réserve uses Champagne’s method and grapes to produce a premium French sparkling wine at a third of the price. I’ll take three bottles of Bailly over one of Veuve any day.

Full disclosure: I spent the summers of my early twenties giving tours at Summerhill, the BC wine industry’s venerable weirdo. While I eventually grew tired of making the same jokes to new tourists, I never got sick of crushing bottles of Cipes. It’s always good. We used to compare it to Champagne. Today, it’s fair to say it’s Okanagan all the way down.

Buy this for someone you love and tell them you bought them a Ferrari. It’s a terrible dad joke but come on, a Ferrari! The wine’s great too. Proof that Italian fizz isn’t all Prosecco, it’s also traditional method gems like this one from the alpine Trento region.