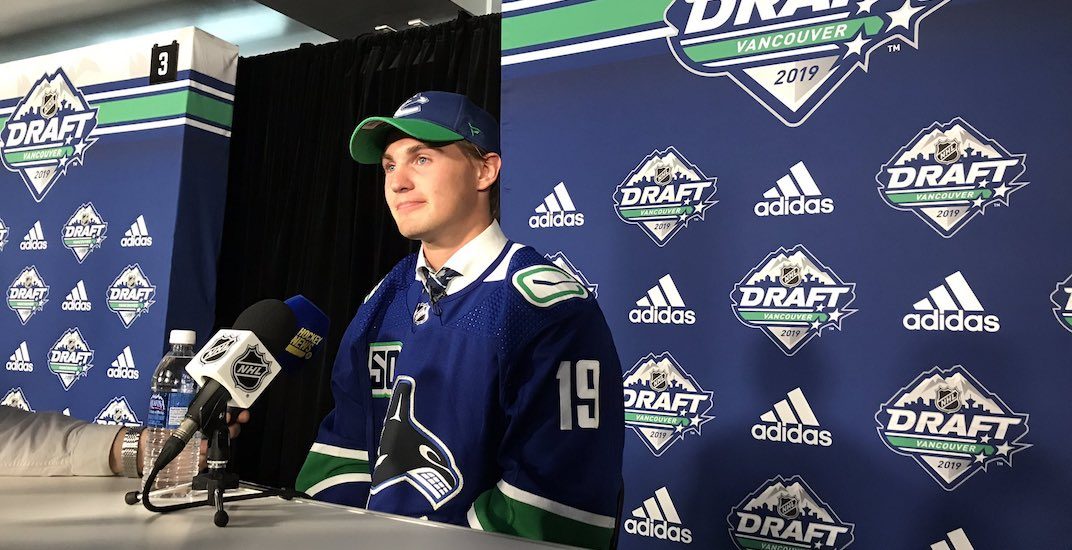 Much has been discussed around the Canucks and how the team — and the rest of the hockey world, rates the organization’s prospects. This, of course, is the result of the club sending former third-rounder, Tyler Madden to the LA Kings in exchange for Tyler Toffoli.

The word around the campfire is that management was not interested in opening talks around Vasily Podkolzin or Nils Hoglander — their two most recent top-40 picks from the 2019 draft. They were, however, open to moving one of college hockey’s best players.

“I feel we have seven players, young players, in our system that I think are going to be on our team here in the next two or three years,” Benning told reporters following the trade.

That got people talking — just who are those seven prospects?

Before we begin, I’ll note that last summer I ranked the Canucks prospects for EP Rinkside — the scouting and analyzing branch of Elite Prospects. At the time, Quinn Hughes and Thatcher Demko still qualified. Madden sat seventh on that list. If I had remade it a week ago, he likely would’ve been fourth.

The thing about graduating prospects quickly is your pipeline often loses a lot of its lustre. It’s inevitable. Fortunately, for the Canucks, they landed a high-end prospect with the 10th overall pick last June in Vasily Podkolzin.

Vasily Podkolzin with the nice dangle and drives hard to the net on the backhand. #Canucks pic.twitter.com/WQs58Niqv3

The 6-foot-1 192-pound forward has been traversing the depth of a top-KHL roster for much of the season. Podkolzin found a home in the 12-minute a night range, skating alongside two other U20’s in Ivan Morozov (VGK) and Kirill Marchenko (CBJ). The power winger has been finding his stride with six points (2-4-6) in his last 11 contests. He’s even begun to sniff some power-play time.

We’re still, at minimum, 14 months away from seeing the 18-year-old in Vancouver though.

Walking away from a draft with two first-round calibre players is always a good time. Especially so if you didn’t actually own two picks on Day 1.

Vancouver’s Director of Amateur Scouting, Judd Brackett said there were nerves as their 40th overall selection inched closer. They were afraid Nils Hoglander would be gone. Fortunately, he wasn’t.

Seriously though, Nils Hoglander dishing between the legs and Dominik Bokk snipping short side gives me life pic.twitter.com/uBFXWbQ4m8

Hoglander opened the eyes of many with his standout World Junior Championship performance. He’s been good in a secondary role with Rogle of the SHL during club play — albeit on a bit of a cold stretch.

There have been whispers that the 19-year-old would like to take a run at a spot on the Canucks next season but the safe money sees him back in Sweden or perhaps in the American League.

Jack Rathbone brings all the attributes you want from a modern back. The 20-year-old skating ability can make you swoon. The Canucks’ top defence prospect’s effortless stride was the main trait that stood out when he was drawing interest as a draft-eligible in the Massachusetts’ prep circuit. Vancouver took a chance on him in the fifth round in 2018 and it’s appearing to have been a great gamble.

The second-year NCAA player is currently fourth for defenders in points-per-game with 1.05. He’s been especially deadly on the man-advantage — recording 14 of his 23 points on the power play.

#Canucks prospect, Jack Rathbone with 3 points tonight – including the game-tying goal with under 2 minutes to play.

With the potential of seeing the 5-foot-10, 176-pound defender walk away in free agency in the summer of 2021, the Canucks will do everything they can to sign Rathbone at the conclusion of his college campaign.

I could’ve been convinced to put several players in this spot, but I gave the nod to 6-foot netminder Michael DiPietro. A 2017 third-round selection, DiPietro has been shouldering the load in Utica this season as a rookie pro. He’s done well for an above-average Comets team. Those around the club praise his work ethic and professionalism.

DiPietro will forever be peddling uphill due to his stature. However, his quick reflexes, strong positional play and burning desire to win create a formidable combination. The type of player you can see beating the odds.

With Vancouver very likely to lose an NHL netminder between now and the Seattle expansion draft, DiPietro will be looked at to step up in the not-so-distant-future.

The fall from grace has been precipitous for the 2016 fifth overall selection. Olli Juolevi has traversed stagnating junior seasons, injuries and adjustments. Yet, at just 21 years of age, he remains a player that can provide very real value to the big club.

The 6-foot-3, 200-pound defender has been effective for the Comets — especially offensively. His 24 points in 43 contests are sixth-most for U22 defenders in the American League. He’s accomplished this on the heels of missing nine months with a knee injury.

It remains unlikely that the Finn will ever live up to his lofty draft spot, but if he can find a way to become an impactful second-pairing player, that should be taken as a nice result.

Kole Lind, a 6-foot-1, 188-pound forward, has found his sea legs in the American League. The second-year pro has blossomed in an offensive role and currently sits seventh in U22 scoring with 40 points in 53 contests — this despite being on a cold stretch of just three points in his last 10 games.

Lind brings a versatile style to the rink. His aggressive, in-your-face style blends well with a mind for play creation and a heavy release. He’s the type of player you can imagine shifting anywhere in a team’s top nine to complement an array of teammates.

Olli Juolevi with the shot, Kole Lind with the tip on the power play.

That's 11 points in the last 11 games for Juolevi and goals in back-to-back games for Lind. #Canucks pic.twitter.com/llYbF1BW0P

The 2019 second-round selection has witnessed his offensive metrics dip this season — his fourth in the Western League. But that doesn’t mean his NHL potential has taken that much of a hit.

Woo is a throwback-style defender who prefers to smash mouths than rack up gaudy point totals. His value will come in the form of physicality, smart reads and being able to transition the puck quickly and effectively. He’ll have an adjustment ahead of him in the AHL next fall, but he remains a player with second-pairing upside.

Best of the rest