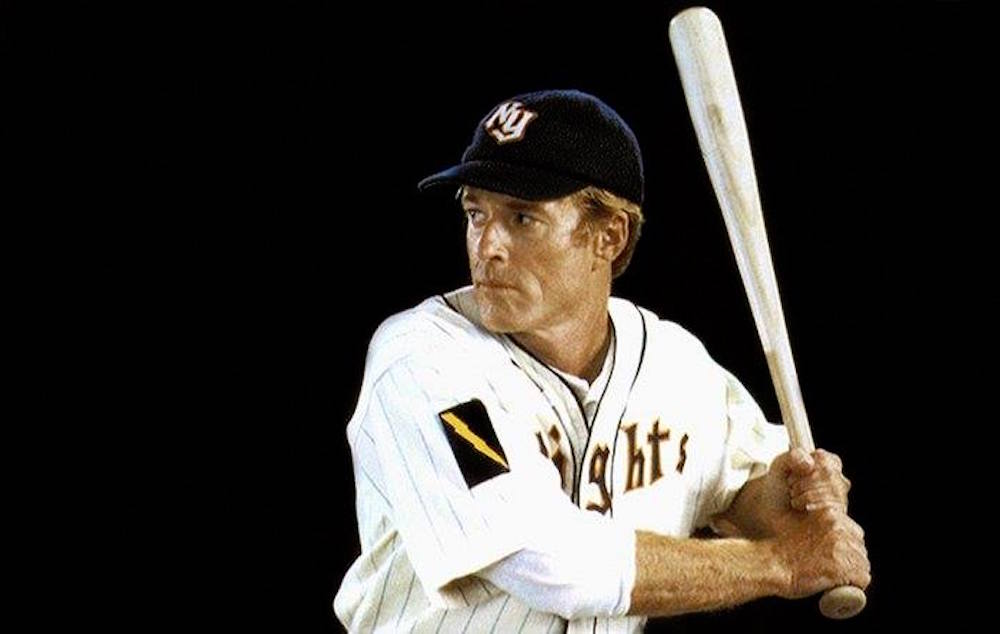 It’s been said that baseball movies make up some of the best sports movies out there, and we’d have to agree.

From little league triumphs, to major league true stories, baseball movies know how to tug at your heartstrings, motivate your inner ball star and teach you a thing or two about romance.

The Natural is about a legend that never was, the greatest player who never got to show it. It wraps itself in baseball lore, nostalgia, and myth – you can practically smell the dirt on the field. Also, Redford looks like he could of been a mid-century player

First off, the best sports monologue comes from this movie when Costner says, “Well, I believe in the soul… the cock…the pussy… the small of a woman’s back… the hangin’ curveball… high fiber… good scotch… that the novels of Susan Sontag are self-indulgent overrated crap… I believe Lee Harvey Oswald acted alone. I believe there ought to be a Constitutional amendment outlawing Astroturf and the designated hitter. I believe in the sweet spot, soft core pornography, opening your presents Christmas morning rather than Christmas Eve, and I believe in long, slow, deep, soft, wet kisses that last three days. Goodnight.”
And secondly, we love how this movie is about the minors, a shift from the major league limelight.

What’s not to like? A fans ultimate dream comes true in Rookie of the Year as a mediocre (well realistically horrible) 13 year old baseball player falls, breaks his arm, and then pitches in the Major Leagues because his tendons have healed “a little too tight.” We’re betting a few hopeful kids broke their arms after watching this movie.

For Love of the Game

More of a rom-com than a sport heavy movie, this is a movie you can get your boyfriend to watch with you.  As a major league pitcher, Costner contemplates the decisions he’s made and if all he’s given up for love of the game was worth it.

A movie where Keanu Reeves plays an underachiever and inveterate sports gambler, who’s life gets changed when he coaches a Little League team from the projects in Chicago. This feel good movie makes our list because it’s based on the real-life chronicle Hardball: A Season in the Projects by Outside magazine editor Daniel Coyle.

Talk about the best inheritance ever! When 12-year old Billy’s grandfather passes away he’s left with the ownership of the Minnesota Twins. Billy takes on the responsibility of the team, becomes their manager and gains their respect, but ultimately has to learn how to be a kid again.

A genuinely sweet and funny coming-of-age adventure when a new kid moves into the neighbourhood and becomes friends with kids who play baseball. This PG movie is a great choice for the little ones.

A League of Their Own

In 1943 during World War II, the All-American Girls’ Professional Baseball League was founded. A League of Their Own follows the wartime era when women’s baseball swept the country. The a-list cast makes this movies with phenomenal performances by Tom Hanks, Geena Davis, Madonna, Rosie O’Donnell and many more!

At first glance this movie can seem a bit odd as an Iowa corn farmer hears voices and interprets them as a command to build a baseball diamond in his fields. But this movie is just the right amount of magic, baseball, and family goals.

Based on a true story, Moneyball is for the underdogs. Oakland A’s GM Billy Beane is has the lowest salary constraint in baseball and if he wants to win the World Series, Billy must find a competitive advantage.

Angels in the Outfield

Flapping wings became a thing after this movie. The baseball Gods listen to little Roger’s prayers to help the last place Angels into the pennant race. The angels are only visible to the audience as glowing special effects, so Roger creates a signal for the manager to know when they’re in the outfield helping.

Trouble with the Curve

Clint Eastwood plays a baseball scout who is nearing the end of his career, or at least that’s what his organization thinks. Not overly dramatic or filled with suspense, Trouble with the Curve excels because of Eastwood’s charisma and the believable chemistry with a charming Amy Adams who plays his daughter.

Dennis Quaid plays a high school chemistry teacher and coach of the school’s baseball team who agrees to try out for the major leagues if his team starts playing better. This heart-warming sports flick is a perfect motivational story.

An oldie but a goodie. This fan favourite has lead actor Walter Matthau dominating the screen when he doesn’t let his newly acquired little league team dissolve. Honest, unforced humor, and a great message to never give up.