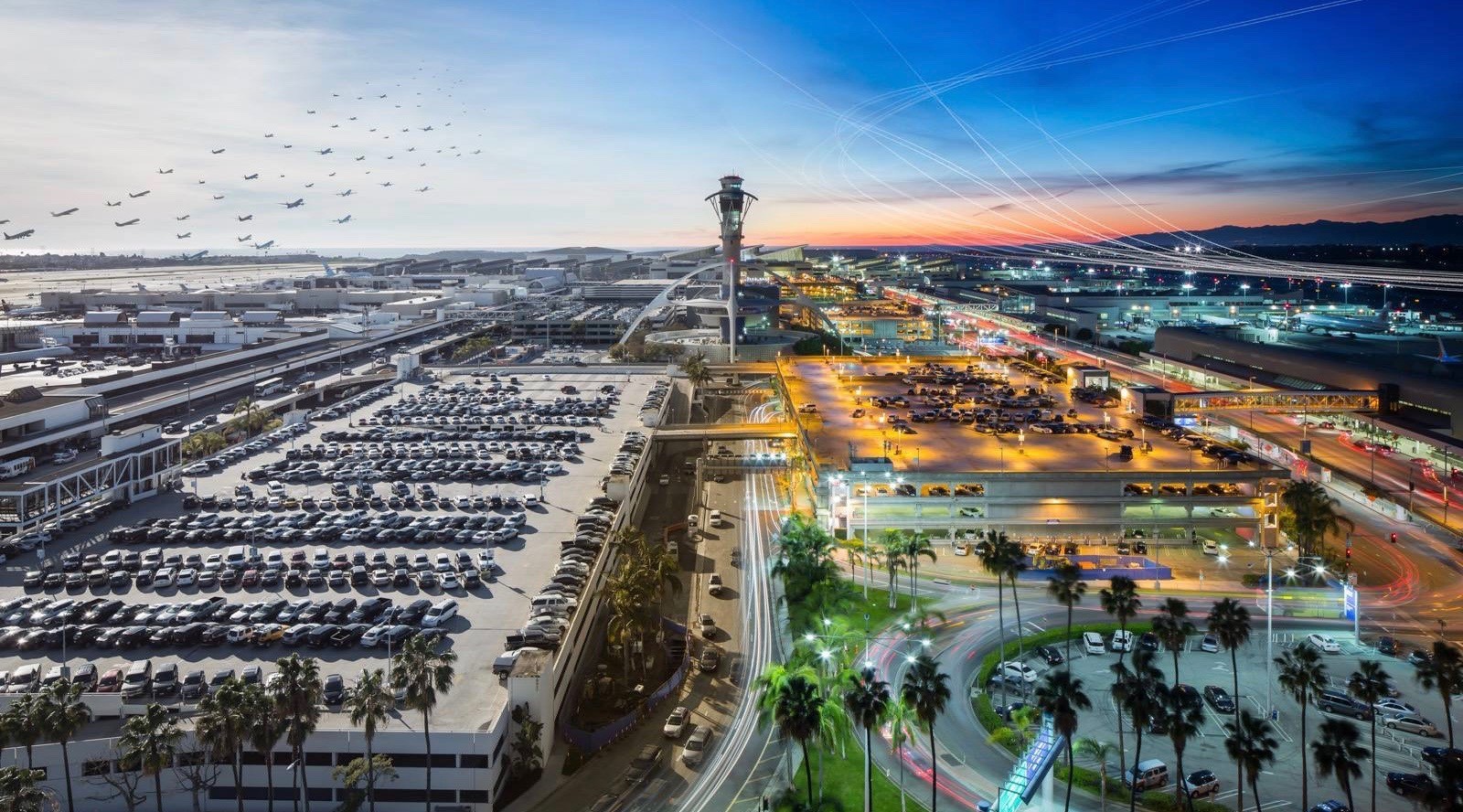 Thankfully, many of the world’s savviest aviation hubs have evolved and offer road warriors endless options of things to do and first class service. Everything from fine dining, free showers, movie theatre and even full 9-hole golf courses are available for travellers in transit.

Luckily travelcuts, the Canadian online travel brand, has found the best international airports that truly have it all.

Missing a flight is one of the worst things in the world. Unless, of course, you’re at one of these eight airports. 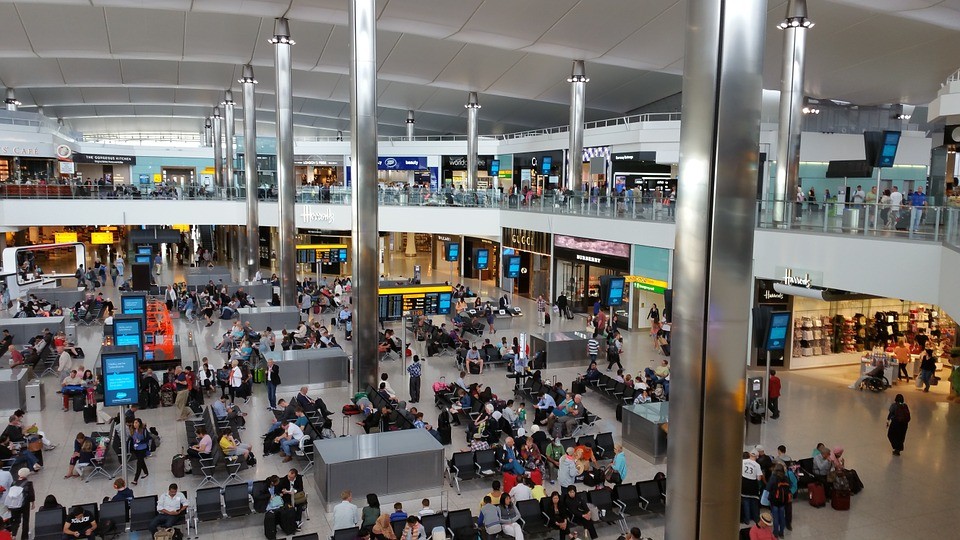 Cartier, Burberry, Zara, Jo Malone and Hermes are just a handful of the 40 luxury brands offered at Heathrow, making souvenir shopping a breeze! There’s no need to even lift a finger with Heathrow’s Shop and Collect service, where the store’s staff will make the arrangements for your purchases to be at arrivals when you come back. If shopping isn’t your thing and you have a couple hours to spare, Heathrow’s express high-speed train reaches Paddington Station in Central London in just 15 minutes. Make a quick trip to the British Museum or stroll along Oxford Street while waiting for your next flight.

Airport hotels often have a bad reputation for being dull and not luxurious – but the Fairmont Vancouver Airport Hotel is quite the exception. Whether your flight is cancelled or you have a long layover, the Fairmont offers floor to ceiling views of the runways, ocean and mountains, so you can sit back and relax. The hotel also has a full-service day spa and health club, just in case you’re frustrated with your airline and need to blow off some steam (cancellations and delays happen!).

If you choose to leave, the River Rock Casino Resort is only a seven-minute drive away. Indulge in one of the slot machines, nine restaurants or the indoor pool. If you want to stay in the airport, however, don’t fret – there are four spas, a shoe shining service, shops and Food on the Fly, delicious and fresh food packaged especially for your flight in a travel-friendly bag. 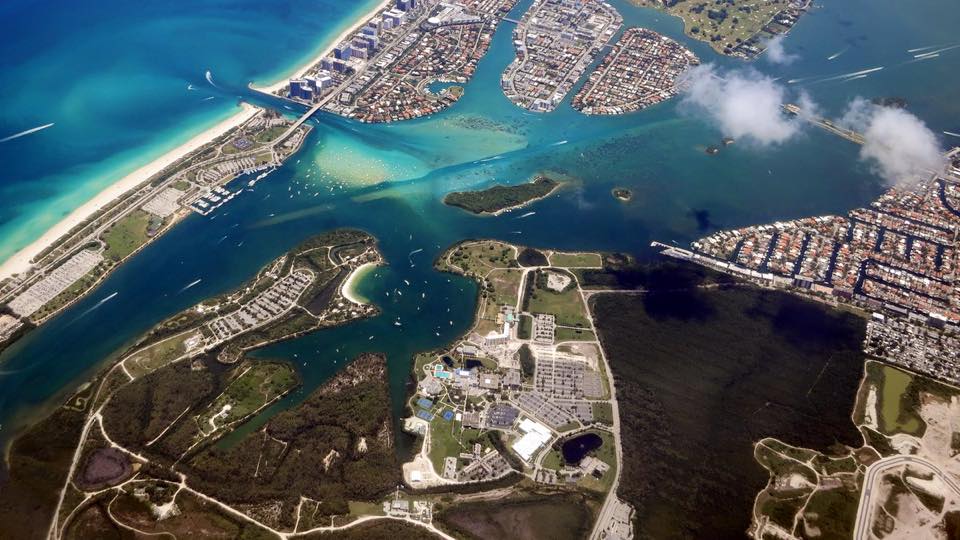 As a common layover location for those travelling to South America, it’s no surprise Miami’s airport has a lot to offer those waiting for their flight. In addition to luxurious shops, spa services and restaurants, there are several exhibitions of contemporary art throughout the terminals, showcasing the work of Miami’s finest artists. To see all the exhibitions, the airport provides Skyride, moving walkways to connect between the terminals. If your layover is long enough, leave your luggage in the baggage storage room and head to the luxurious South Beach for a short sunbathing session. If you forgot sunscreen, it’s a good thing the airport has tons of shops catering to your needs. 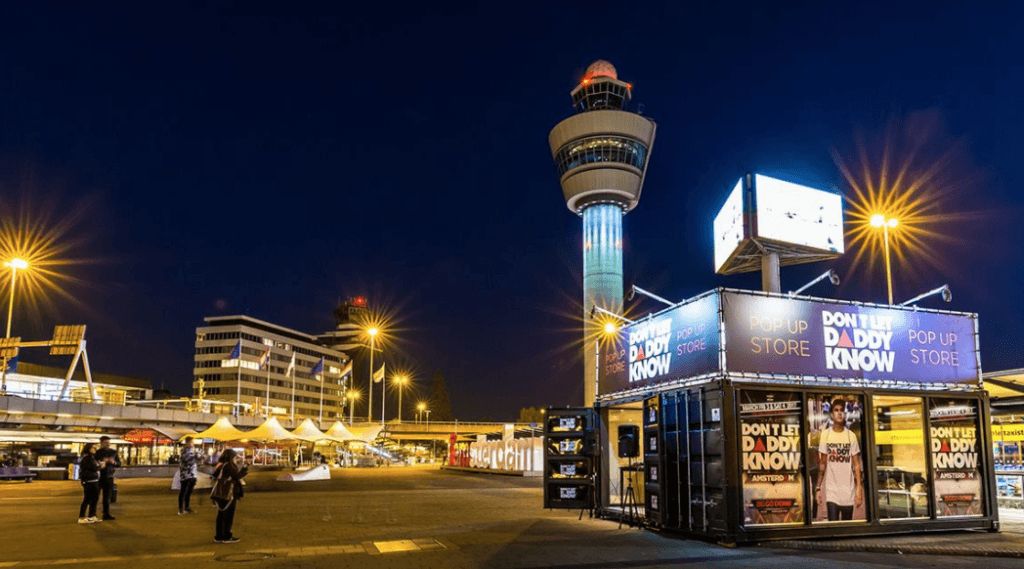 Considered a “world of its own,” Schiphol Airport has a wide variety of airport services from free Wi-Fi to the Airport Library. Whether or not you have a device, there are internet centres throughout each terminal that provide PCs with high-speed internet. You can also purchase high-speed internet to stream music and/or videos, upload your vacation pictures or connect to your company’s network — in other words, boredom is not an option. In case you didn’t have time to visit Amsterdam or you’re only there for a layover, the airport offers an authentic Dutch Bar, Dutch Kitchen and even a House of Tulips so you can truly embrace the Dutch culture. 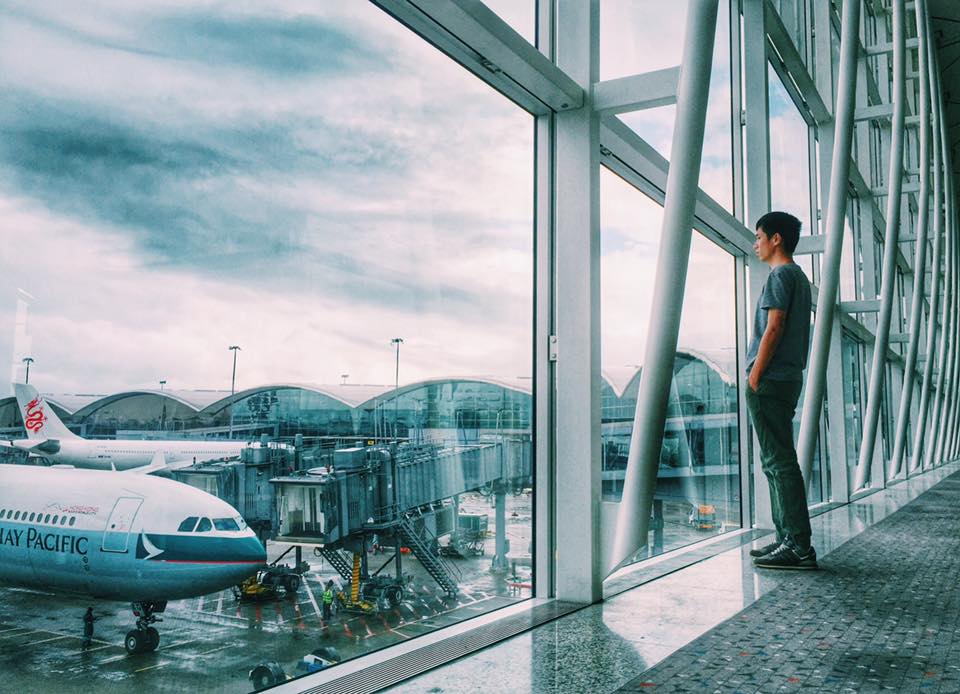 Though Hong Kong just received a 50-year land lease to develop a retail, dining and entertainment hub, it’s hard to imagine what the airport is missing. Just for entertainment, there’s an IMAX Theatre, Aviation Discovery Centre, virtual golf and the Dream Come True Education Park for children. While you could delve into the many Western restaurants offered, the airport has over 15 Chinese food services for you to try. If seeking something more low-key, head to one of the 50 shops offered, from Balenciaga to the Hong Kong Disneyland store. 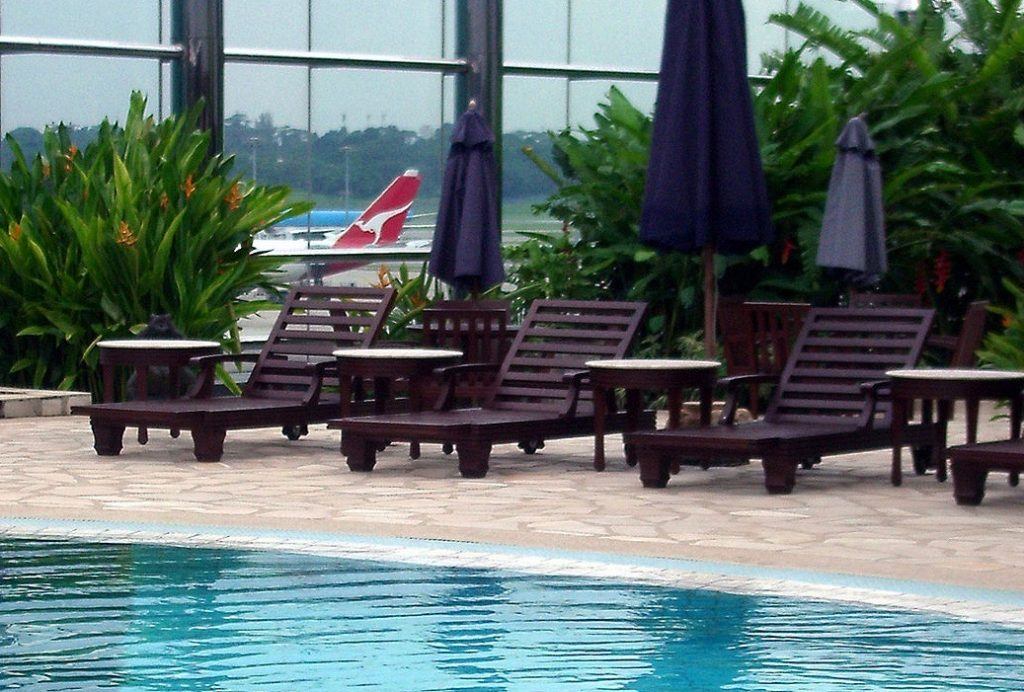 It will be hard not to spoil yourself at Changi Airport with over 350 stores offering everything from luxury goods to necessities — in fact, it’s one of the most impressive collections of duty free stores in any international airport. With the free Skytrain service, travel between terminals to discover the airport’s nature trail (there are several gardens in each terminal), movie theatre, entertainment deck, swimming pool and the world’s largest Kinetic sculpture, titled Kinetic Rain. If you’re at the airport for over 5 hours, consider the free 2.5 hour guided tours of Singapore — all you have to do is book it an hour before to truly learn about this dynamic city. 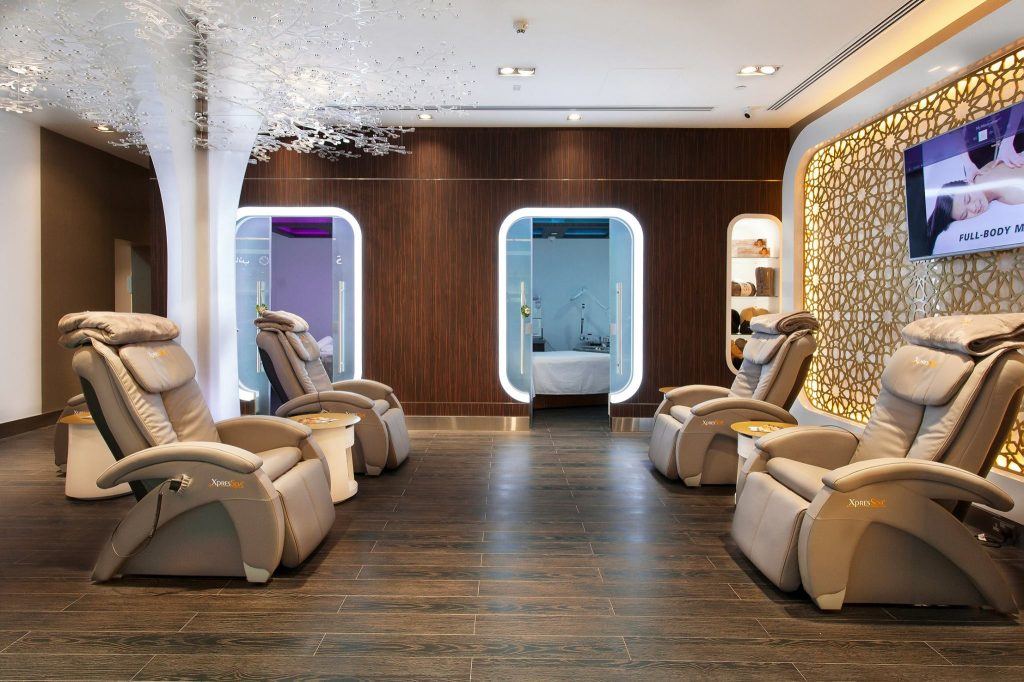 You may not want to leave once visiting the Dubai International Airport with all of its services. You can finish some work in the business centre, visit the health centre, and clean up at one of the complementary shower facilities, all before your flight. The airport is all about relaxation with a spa, jacuzzi, steam room, zen garden and most importantly, the soundproof SnoozeCube — a mini hotel room with a comfy bed, TV, storage and Wi-Fi. If you want to explore, immerse yourself in one of the luxury brand shops or at Le Clos, which showcases the finest and most sought after drinks from around the world. Regardless of what you choose, you’re sure to be refreshed before your flight. 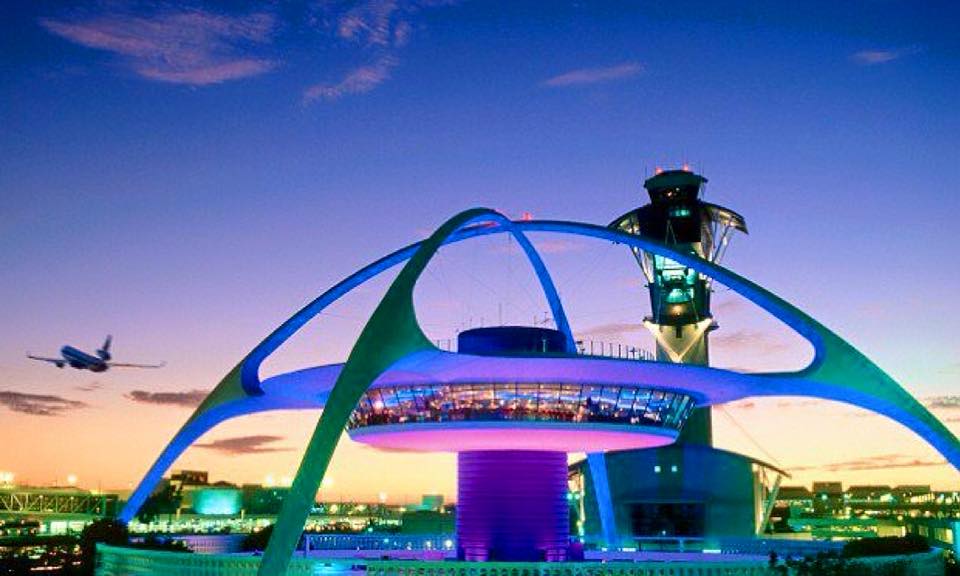 As the sixth busiest airport in the world and second busiest in the United States, LAX has a wide variety of shops, restaurants and hotels on-site. Take your time browsing stores exclusive to L.A., such as the luxurious and trendy Fred Segal. The airport’s food and beverage services also include some of California’s favourites, including Coffee Bean, Nate N’ Al’s Deli, La Brea Bakery and Monet’s. The best feature at the airport, however, is LAX FlyAway buses – these are regularly scheduled round-trips between each terminal at LAX and other locations in Los Angeles, including downtown, San Fernando Valley, Hollywood and Westwood. In case you’re stuck or have a long layover, it’s easy to go catch that California sun.