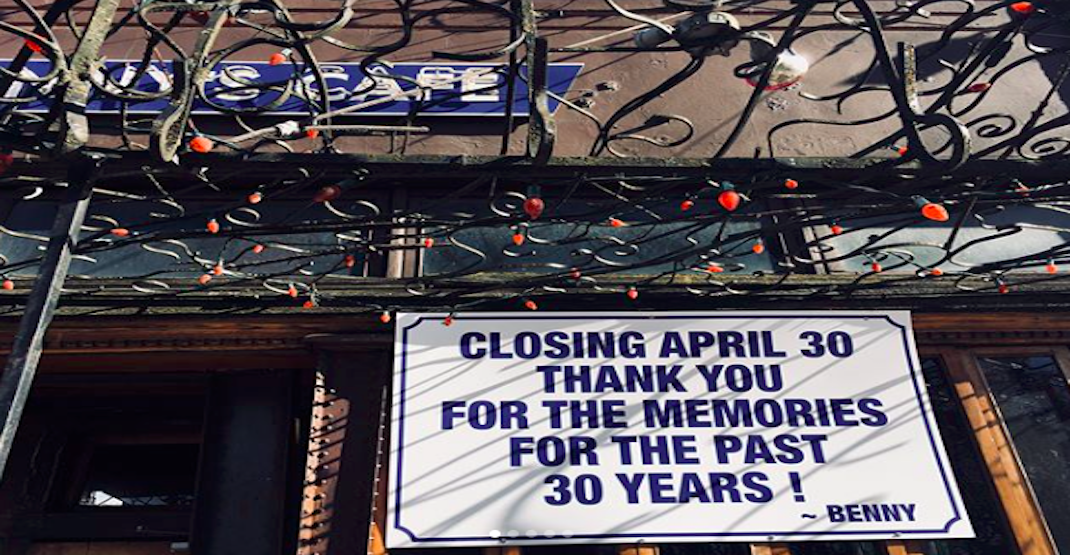 If you hadn’t heard by now, we’ve got some bad news for you.

Benny’s Cafe in Kitsilano is closing its doors for good at the end of this month.

After 30 years of serving Vancouver with its iconic bagels, Benny’s Cafe, along with its neighbouring businesses, are being torn down to make room for new luxury condos.

General Manager of Benny’s Cafe Harj Chahl said in an interview with Daily Hive that, although the new building will come equipped with commercial units, the prices will be too high for Benny’s to make a reappearance in the same location.

“It’s disappointing, that we have to close a business that’s been there since 1988,” Chahl told the Daily Hive.

Chahl and his brother Parm have been running the restaurant almost 20 years. During that time he says he saw a change in the neighbourhood, resulting in less students or families living in the area.

Benny’s Cafe on West Broadway is closing to make way for yet another condo project. 😠#vancouver pic.twitter.com/osHY8N7PzB

Chahl says he never realized how closely some people held the Cafe to their hearts, but is happy to know that it has had an impact on the community.

Customers have gone as far as calling him on the phone inquiring if they can buy pieces of the restaurant as memorabilia.

“I got a few phone calls to buy tables and chairs,” Chahl said.

“People have been coming here for 30 years, every day pretty much — or five to six times a week. There’s numerous customers that I’ve met that have met their future spouse [at Benny’s],” Chahl said in the phone interview.

He said that, although he’s disappointed with the closure, it was inevitable.

“Everybody has their own little personal memory of the store and we are just a part of it. But there is also a community that the store belongs to,” he said.

For now, he and his brother will be taking a break from the business to relax, spend time with family, and treat themselves to a well-deserved vacation.

Benny’s Cafe will be open until April 30, if you happen to have a hankering for one last bagel.