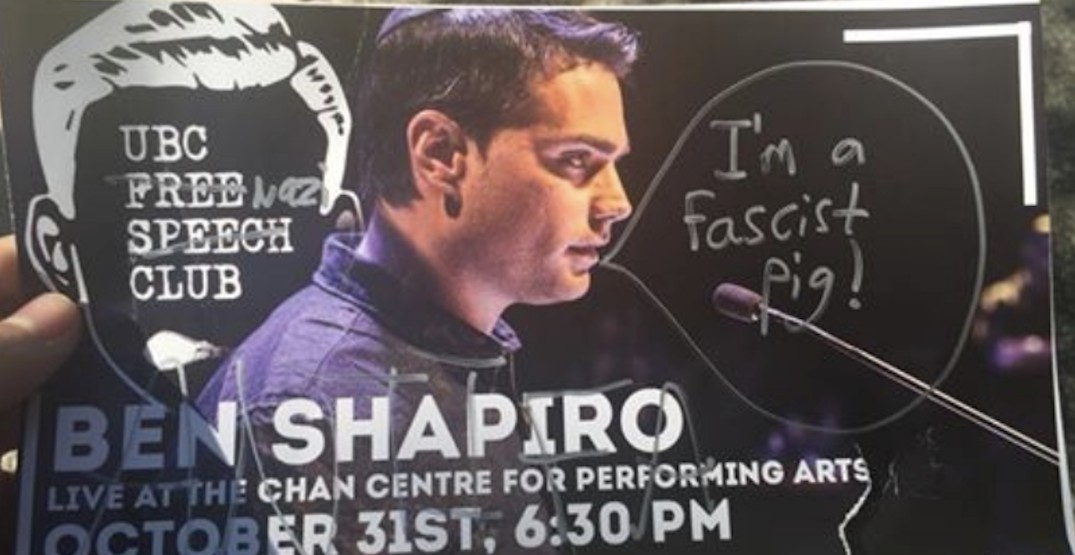 The UBC student group hosting a talk by controversial right-wing US commentator Ben Shapiro says it anticipates protests — and security will be extremely tight.

The talk on Halloween night is already sold out, but the campus is far from united on whether he’s welcome, and posters advertising the event have already been vandalized.

Shapiro’s views have been called the “voice of the conservative millennial movement.” He has a large social media following and his podcast, The Ben Shapiro Show, is one of the most listened to shows in the US. He is also the editor-in-chief of the right-wing website The Daily Wire.

If you’re not familiar with Shapiro’s views, he is strongly against abortion, has claimed being transgender is a mental illness, and says the Affordable Care Act should be repealed.

Shapiro has also spoken openly about his dislike for President Donald Trump because he disagrees with Trump’s brand of conservatism.

Shapiro’s talk was organized by the UBC Free Speech Club, which describes itself as “nonpartisan and committed to cultivating an open dialogue on campus where arguments are made with and reason rather than rhetoric and personal attack.”

The club operates as its own private group and is not affiliated with the UBC Alma Mater Society (AMS).

‘The highest security we have ever had’

Angelo Isidorou, director of the Free Speech Club, told Daily Hive that the Shapiro talk is going to be “the biggest event” it has ever organized, with nearly 1,300 people attending.

“It’s kind of a big cultural thing,” said Isidorou, noting that the demand for tickets on the event’s Facebook page is still high.

But many students are also against bringing Shapiro to UBC. In September, event posters promoting the talk were vandalized. 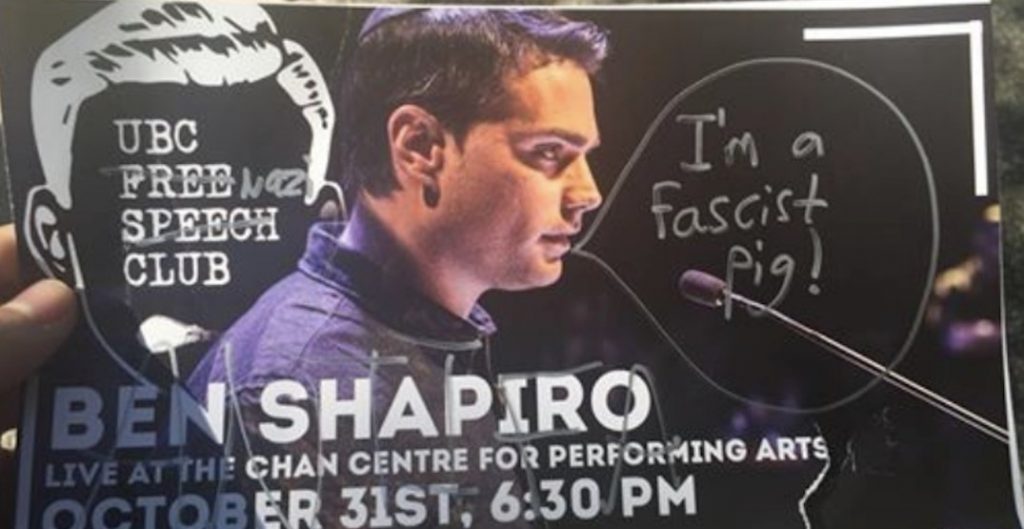 Due to Shapiro’s controversial viewpoints, Isidorou also anticipants that protesters will be out in full force.

“This is pretty much, out of all of our events, the highest security we have ever had,” he said.

In the past, Shapiro’s visits to campuses such as the University of California Berkeley have been met with large protests.

“For us, its Halloween night and we want to make sure our guests feel safe,” he said.

UBC has a ‘commitment’ to free speech

Although UBC’s media relations department said it could not provide any specific details about event security, the university acknowledges the controversy around Shapiro’s talk.

“UBC’s commitment to free speech includes student groups and other invited guest speakers using UBC venues such as the Chan Centre. This is the case even where some members of the University community may consider the guest speaker’s ideas, or the way in which they are expressed, to be controversial, or offensive,” reads a statement sent to Daily Hive from UBC Provost and Vice President Academic Andrew Szeri.

“With respect to concerns regarding the safety of students, staff, faculty, and members of the public, UBC Campus Security advises the administration on best practices to follow regarding events on campus.”

While the University says it fosters free speech, the UBC’s AMS has taken a strong stance against Shapiro’s talk.

In a statement, AMS President, Marium Hamid, expressed her concern about the event.

“In the AMS constitution, one of the Society’s objectives is ‘to promote unity and goodwill amongst its members.’ We worry that Ben Shapiro’s discourse will do the opposite,” she wrote.

The AMS notes that many students have expressed concern that Shapiro’s talk could make “transgender, queer, Indigenous, Muslim and other historically marginalized members of our community feel threatened.”

But Isidorou insists that bringing speakers with different political opinions is needed at UBC.