Every single month, more than 4,000 items are found on the regional public transit system and turned in by transit staff (and even passengers) to the TransLink Lost Property Office. Incoming items are catalogued and sorted daily within this incredibly organized office tucked away inside SkyTrain’s Stadium-Chinatown Station. However, the role of the office’s staff goes much further than collection: great attempts are also made to reunite passengers with their forgotten belongings. What surprises staff though is how many do not attempt to trace their lost belongings; if there is one important message the office would like to deliver to transit passengers, it is to never lose hope on finding their lost bounty.

For staff at the Lost Property Office, their job of reuniting owners with their property is deeply satisfying. They find joy in playing a positive part in the lives of thousands of individuals; their job can also be deeply life changing for those they serve. Staff are incredibly pro-active with tracing the owners of the belongings that end up in their office rather than waiting for the individuals to approach them. This was no more apparent than the hum of activity I saw upon stepping into their office and main storage space, where staff were constantly making phone calls (and emails) based on identification found attached to belongings.

Moments after I had just arrived, one of the several staffers on the phone gave me a brilliant smile and silent yelp: she had reunited someone with their wallet. Wallets, or identification in general, are among the most common items collected by the office. They are, for obvious reasons, some of the most important and valuable items the office collects. They also happen to be some of the most trackable belongings.

When a traveler left her wallet and passport on the Canada Line several weeks ago, Lost Property staff came to her need immediately. She was scheduled to fly out of the city on the same day and needed the documentation to board her flight. Through the office’s efforts and wide network, they were able to retrieve and return her belongings just in time for her to board the flight. These are the type of uplifting experiences that drive Lost Property staff every day, to do their utmost in hunting down owners and their lost property.

You would also assume that valuable items, bank and credit cards, and cash inside wallets are often stolen when found, but this is anything but the case. Staff have remarked wallets are virtually always completely left intact with nothing missing when returned to their owners. Not even cash. This is possibly an indication of the remarkable honesty the average Vancouverite holds.

Each year, approximately 30 per cent of the items in the office are reunited with their owners. While this is a relatively high success rate, staff believe there is much room for improvement if more passengers who lose their belongings made an effort to find/report their lost possessions via the office.

What to do if you have lost something

In 2011, excluding over 5,000 umbrellas, nearly 37,000 items were collected and collated by the Lost Property Office. When items are found on the system, they are returned to their respective transit vehicle depots first. The Lost Property Office collects items from the vehicle depots of all three SkyTrain lines (Expo, Millennium, Canada), the bus depots of the Coast Mountain Bus Company, and the SeaBus (it does not collect items from the West Coast Express and the West Vancouver Blue Bus).

It can take up to 2 business days for lost items to be delivered from the various vehicle depots across the region to the Lost Property Office at Stadium-Chinatown Station. Bikes are delivered to the office once a week.

The Lost Property Office has limited space and resources to retain the massive influx of belongings it receives. Bikes and bags are kept for 14 days and everything else for 10 days. On the other hand, wallets and other valuables are held for 30 days while things like identification are sent back to their government agencies. Library books and textbooks are sent back to their respective libraries and schools so that their patrons do not incur [additional] fines and penalties. Unclaimed keys are melted down for security reasons.

Therefore, it is important for passengers who lose their items on transit to report and follow up on their lost belongings immediately after the fact. Given that nearly 70 per cent of items that end up in the office go unclaimed, do not give up!

There are three methods for reporting/hunting down your lost items:

Special thanks and appreciation to Nora and the staff of the Lost Property Office for giving Vancity Buzz a tour of their operations, and to Robert and Jhenifer at TransLink’s Buzzer Blog for organizing the tour.

Written by Kenneth Chan, a Columnist at Vancity Buzz, with photography by Gabriel Lam at Pinetree Creative. Follow Kenneth on Twitter: @kjmagine

Treasures of the Lost Property Office

Just about anything has ended up at the Lost Property Office – from the imaginable to the absolutely surreal and unimaginable, which includes things such as false teeth and horrific science experiments. Last year, staff accepted what looked like an innocent fish tank, only to return the following Monday to see baby spiders had hatched inside the tank. The most common items, however, are umbrellas and gloves (which are separated into different containers indicating the depots they were sent; hence, where in the transit system they were found).

At first glance, we thought someone lost their Oscar award. 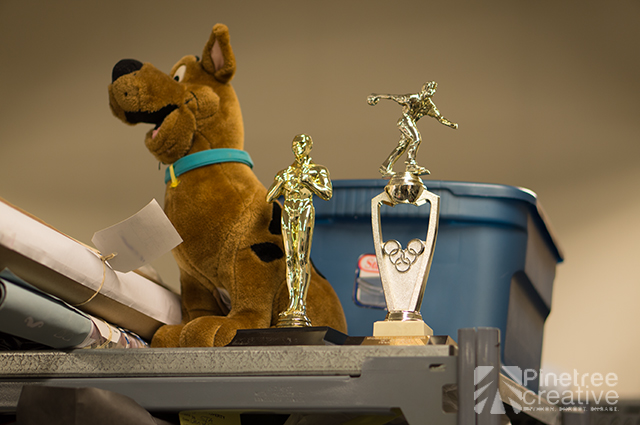 False teeth, both actual and a model. 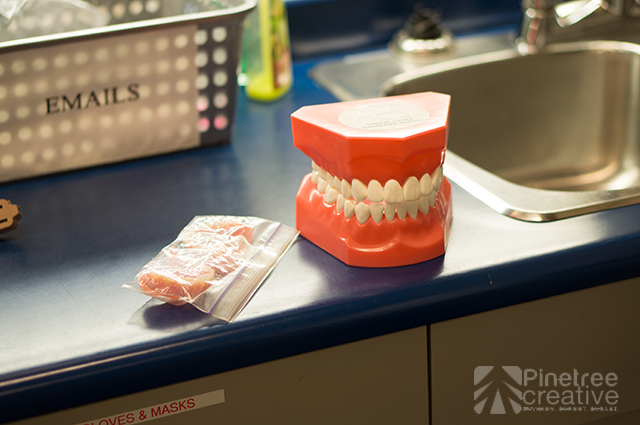 Just one of many containers of mobile phones. 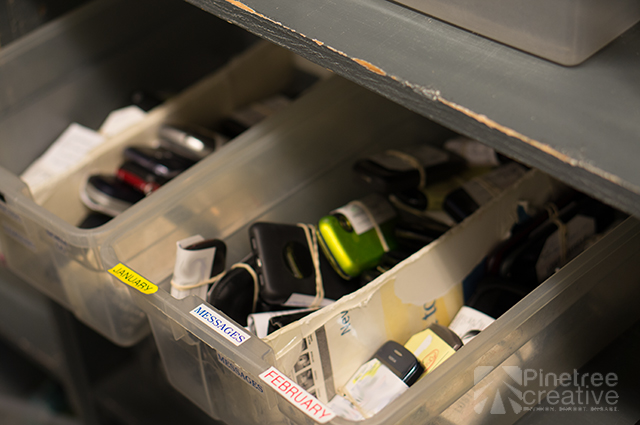 Musical instruments are lost too. 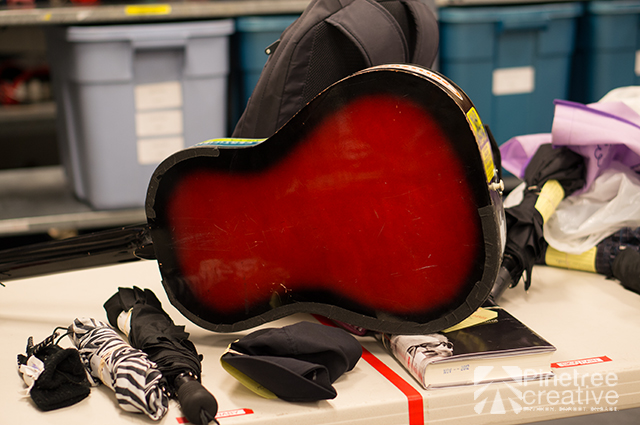 Handbags, lunchbags, and even one pair of ice skates. 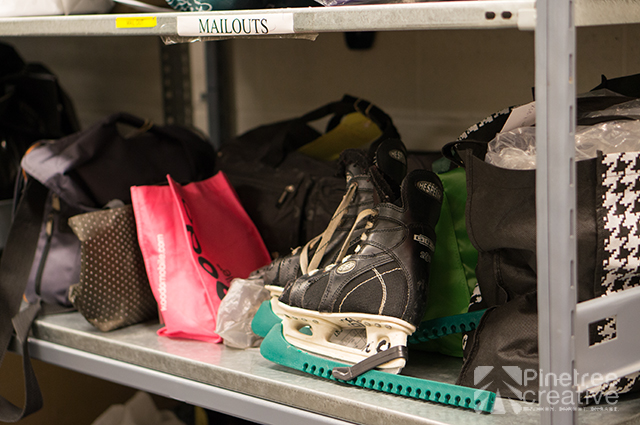 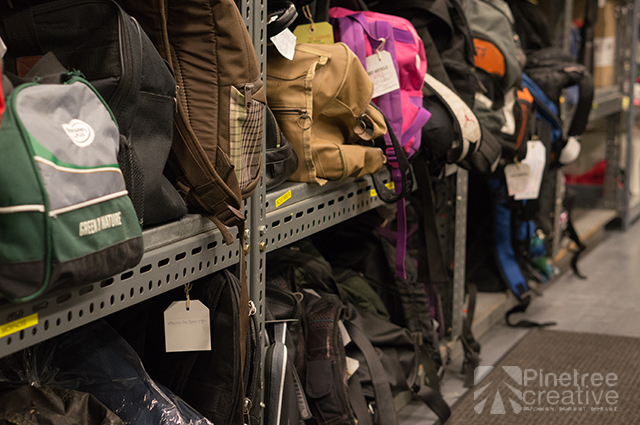 A wall for coats. 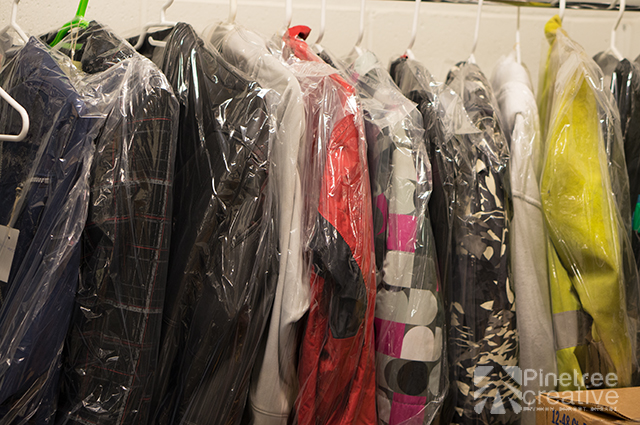 Tubs of gloves, mittens, and purses. 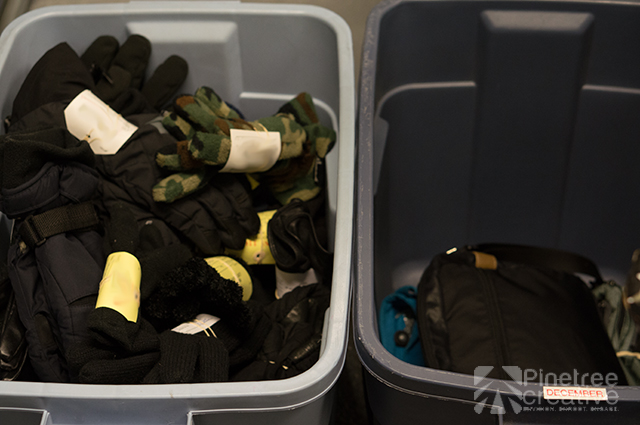 Drawers of prescription glasses and sunglasses. 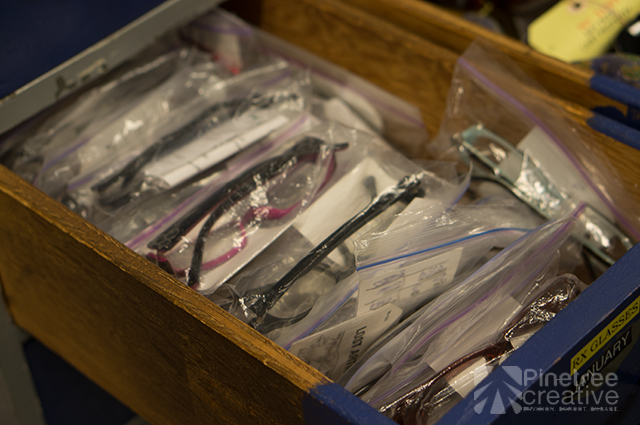 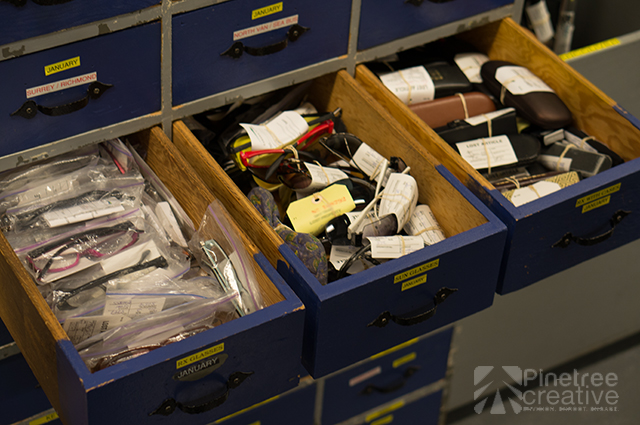 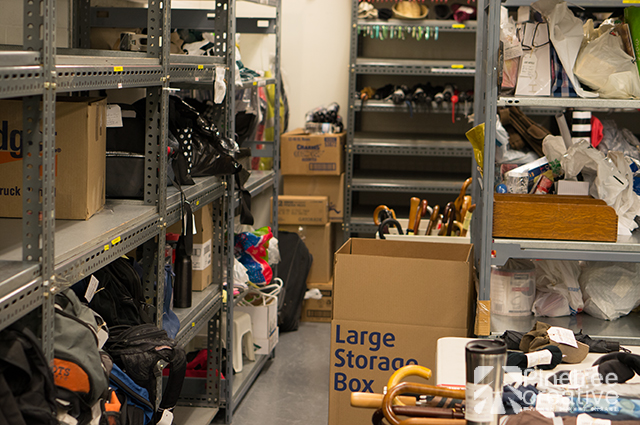 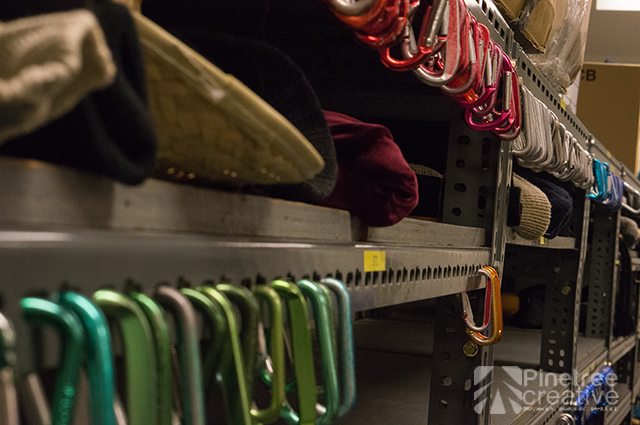 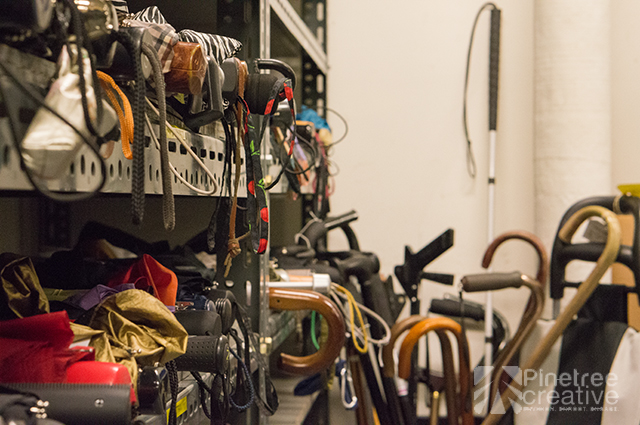 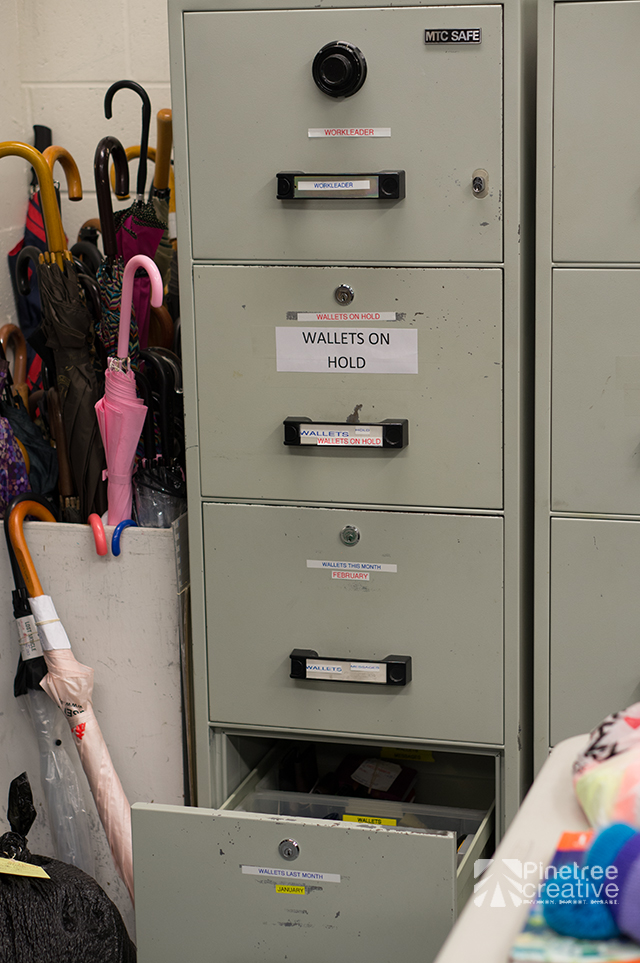 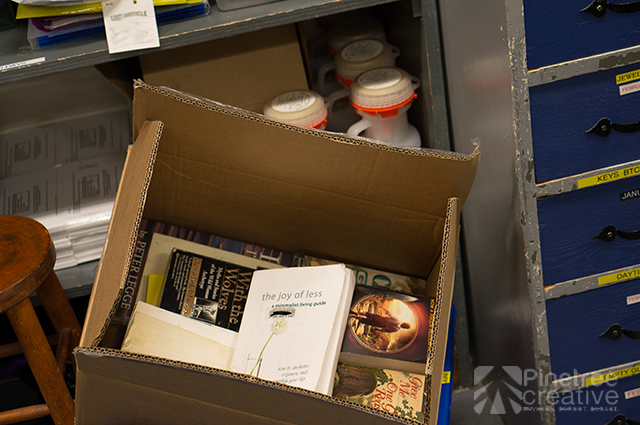 Some of the bikes collected. Bikes are frequently left on the bus bike racks, a common occurrence when bike riders leave through the back doors instead of the front doors. 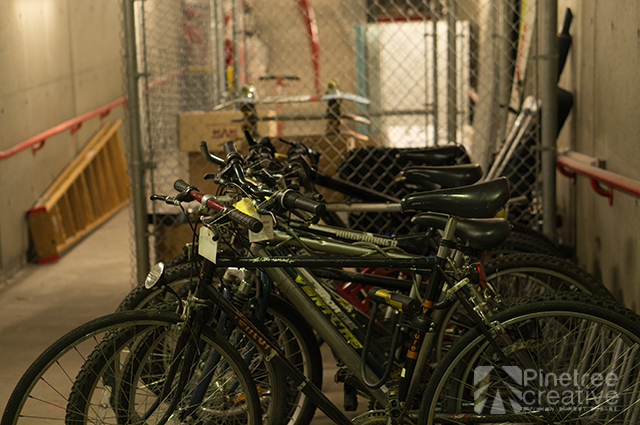