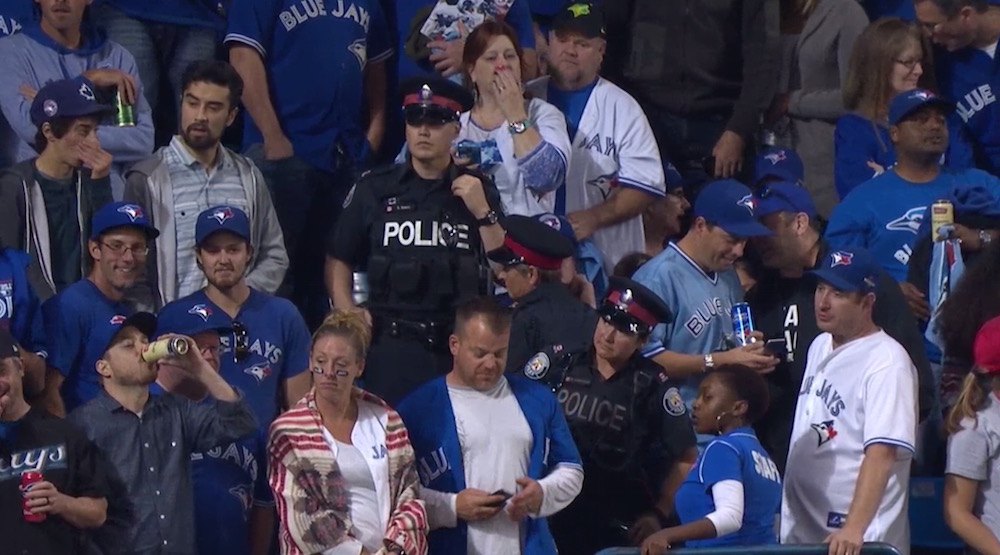 There’s not much more infuriating for a fan of a pro sports team than to watch your fellow fans make an ass of themselves. I’m not talking about painting your face, yelling and screaming, or having ridiculous superstitions. No, I’m talking about when a small faction of fans of the team you cheer for sullies your reputation.

In the bottom of the seventh inning, Melvin Upton Jr hit a deep fly ball to left field. Orioles left fielder Hyun-soo Kim caught it for the third out of the inning, but had to dodge a can of beer tossed from the stands in the process.

Even though it was just one idiot responsible, it’s a black eye on the Jays’ fanbase. It’s not fair, but that’s the way it goes. And it could have been a lot worse.

What kind of Canadian throws a beer away? #Dummy #BlueJays

This incident – coupled with reports of racist language coming at least one fan in seats, and last year’s incident in Game 5 versus the Texas Rangers – must be frustrating for the 99.9% of classy Jays fans.

49,933 plus one world-class moron in the house tonight watching #Bluejays and #Orioles wild-card game. #Jays

The Jays won the game and Edwin Encarnacion’s game-winning home run will be remembered for longer than these incidents, but still. Get it together idiots, don’t give the rest of Jays Nation a bad name.