With Vancouver Craft Beer Week coming up in less than a week, our senses are going to be overloaded with a huge variety of beer to choose from. It can seem like a daunting challenge trying to figure out which ones to try and which you’ll like the best, but that’s why we’re here to help.

While there are a ton of different beer styles to choose from, beer is essentially broken down into two categories: Ales and Lagers. There are various reasons that separate the two but Ales are typically sweeter and have a general malty flavour, while lagers are drier and less fruity. But you ask, what does “malty” and “fruity” mean in a beer? Good question.

Malt is derived from grains, and is the part of the beer that is fermented. The grains that are generally used to create malt are wheat and barley. There are several varieties of malt, with varying flavors. Many people also find a malty flavor to be somewhat sweet.

Most ales have some degree of fruity flavor present, even though there is no actual fruit in the beer. The fruity flavor is a by-product of the yeast fermentation in the brewing process.

And then there are hops.  Hops are a plant that is also added to beer, and they give beer a bitter flavor or aroma depending on when they are added during the beer making process. Pale ales are generally the hoppiest beers available.

If you are trying to determine the beer you are drinking just by appearance alone, here is a handy colour guide from Wikipedia: 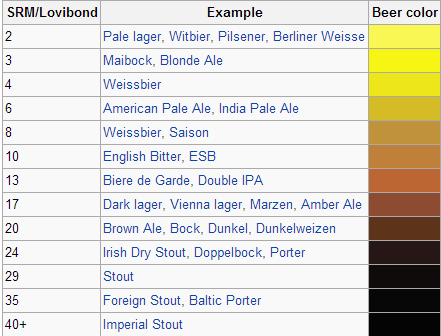 Other factors to consider when you are choosing a beer are the IBU and the ABV. ABV, or alcohol by volume, is simple: it’s how strong the beer is going to be and how quickly you are going to get drunk; obviously the higher the number, the faster you’re hitting the floor.

IBU (International Bittering Units Scale) provides a measure of the bitterness of the beer, generally from the hops. If you discover that you are not a fan of hoppy beer, then avoiding a beer with a high IBU is generally a good rule of thumb.

Of course the best judge of a good beer is your taste buds, so by all means keep experimenting with different flavours. With enough practice (drinking) you’ll eventually find what works for your palate and what beer resonates with you the most.

Hopefully these tips have helped you gain a better understanding about how to get the most out of your beer tasting. We’ll be at the VCBW events to showcase the latest in Vancouver’s craft beer industry and tweeting from the event via my Twitter handle @wanderguides.