Vancouver is a hot-bed for craft beer, but can any one brewery stake their claim to being the best? With a little help from Doolin’s Irish Pub (and you), this Thursday, one will walk away with “total beer glory”!

The Battle Royale will pit four different breweries against each other, with the winner being selected in democratic fashion – whichever brewery’s keg sells out first will win.

This month’s contenders are Granville Island Brewing, Longwood Brewery, Coal Harbour Brewing Company, and Bridge Brewing Company. Each will bring a keg of their best craft beer, with you helping to choose the winner.

The winner will not only take home bragging rights, but will also have their beer featured on-tap at Doolin’s through the month of June.

Tickets cost $25 and come with four 16-ounce cask beers – one for each contending brewery. 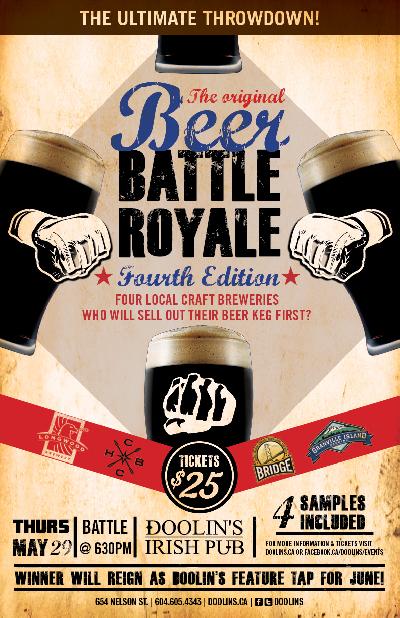